Trump Is Leaving Congress No Choice But to Impeach

You don’t have to be a former prosecutor to understand what’s going on. Whistleblower laws are designed to protect against fraud and abuse in government. They make it possible for government employees to step forward without fear of retaliation. It’s unprecedented for a whistleblower complaint to involve conduct directly attributable to the President of the United States, yet President Trump seems to have confirmed that he is the subject of a whistleblower complaint, brought by someone in the intelligence community and hijacked from what would normally have been a routine path of transferring it to Congress once the inspector general for the intelligence community deemed it credible and urgent. It is also unprecedented, and thoroughly unacceptable, for any elected official in our country, let alone the President, to be able to snuff out what appear to be serious concerns about the legality of his own conduct.

We do not know all of the details, because the Director of National Intelligence (DNI) has not released the full complaint to Congress, as the law requires. But reporting seems to indicate that Trump withheld almost $400 million in congressionally allocated aid from Ukraine and subsequently dangled the decision on releasing that aid at Ukraine’s President on the same timeline in which the suggestion was made that Ukraine investigate Democratic presidential candidate and former Vice President Joe Biden’s son Hunter on corruption charges. Trump himself told reporters that he tied aid for Ukraine to the country’s anti-corruption efforts. It appears as if Trump, yet again, sought help from a foreign country in hopes of damaging one of his opponents in a presidential election – but this time, acting from the Oval Office. Trump, of course, maintains that a phone call he had with Ukraine’s new president was a “beautiful conversation” and that nothing improper happened. But he has never given the country much reason to trust his version of facts when there is a dispute.

The founding fathers, always concerned about a future president who might engage in self-dealing, set up a system of checks and balances, giving Congress Article I oversight powers to review a president’s conduct. A sitting president who tried to defeat that process and deny Congress the opportunity to engage in oversight of a situation involving the possibility of criminal conduct is precisely what the founding fathers sought to forestall.

We may all be suffering from constitutional crisis fatigue, but that doesn’t make this any less of a constitutional crisis. How can our republic survive unless a president can be held accountable for preventing a co-equal branch of government from fulfilling its obligations to citizens?

We do not yet know who decided to circumvent that mandatory process for referring credible and urgent whistleblower complaints to Congress by involving the Department of Justice’s Office of Legal Counsel. We don’t know how word of the complaint filtered outside of the intelligence community’s inspector general and the Office of the Director of National Intelligence. But at some point, the DNI received guidance from DOJ’s Office of Legal Counsel — on the flimsiest of excuses since it centered on the President –that it need not forward the complaint because it involved “conduct by someone outside the Intelligence Community and did not relate to any ‘intelligence activity within the responsibility and authority of the DNI.’”

After all of the ways this Attorney General has acted as the President’s lawyer, no one should be surprised. But we should all be shocked because of the implication, yet again, that this is an imperial presidency that stands above the law. Although the country has absorbed the DOJ policy that prohibits indictment of a sitting president, last week brought a court filing from Trump’s lawyers that claimed he could not even be investigated.

If Trump’s conduct is consistent with news reports and with what he himself seemed to confirm – that he sought an investigation of “corruption,” a topic that came up on visits to Ukraine by both his vice president and his personal lawyer Rudy Giuliani, from the Ukrainian government at a time when he was making decisions about whether to release millions in aid – the federal bribery statute, 18 USC 201, could apply. Campaign finance law could also have been violated, as well as other criminal provisions. But we’re not talking about criminal proceedings against a president here.

The sole remedy for serious misconduct by the President, given current DOJ policy, is impeachment, which doesn’t require that the President have committed a crime. Instead, Congress is charged with determining whether the President has committed high crimes and misdemeanors. The definition of that phrase is left to Congress’s discretion, but even reluctant Democrats and Republicans might consider that an unambiguous felony like bribery, if the facts support that conclusion that the president committed it, would qualify. And yet Congress can’t fully investigate without access to the whistleblower complaint.

It’s worth considering the context. This is a president who can no longer claim he’s a political naïf who doesn’t know it’s a crime for American politicians to seek election help from a foreign country. But his interactions with Ukraine, which give the appearance of seeking election help from that country, occurred against the background of the Russia investigation – which the President survived largely because he refused to participate in an in-person interview and obstructed the process. It seems possible that rather than viewing the Mueller investigation as a warning, he’s viewing it as a guidebook.

If the president believed Joe Biden or his son committed a crime, that information could have been referred to the FBI. That’s how we do things in this country. Law enforcement is supposed to investigate criminal cases, based on the facts and the law, without interference from the President. If there was anything to the Biden allegations, Trump could surely have relied on his Justice Department to get the job done. There would have been no need to seek foreign help.

Experienced prosecutors know that it’s rare to have proof of an explicit conversation involving the quid pro quo for an illegal deal. But that doesn’t mean a crime can’t be proven once all of the facts come to light. And that’s the crux of the matter. Trump shouldn’t be permitted, yet again, to avoid accountability by obstructing an investigation.

This isn’t about the whistleblower or even about Biden and it’s not about just one phone call. It’s about Trump. If there is nothing to the whistleblower’s allegations, why not let Congress see them? Why not follow the law? Violating it to prevent Congress from engaging in oversight is serious misconduct, even for this lawless president. It constitutes obstruction of Congress, one of the charges that formed the basis for the Nixon articles of impeachment. Trump’s denials are hollow. If Congress doesn’t receive the complaint in connection with the DNI’s testimony before the House Intelligence Committee on Thursday, its duty to impeach for the sake of our country is clear. 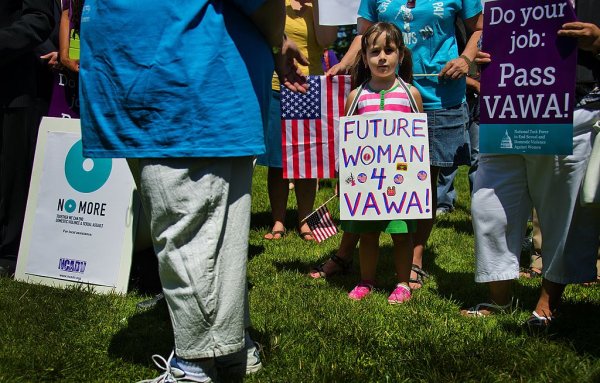 The Violence Against Women Act Was Signed 25 Years Ago. Here's How the Law Changed American Culture
Next Up: Editor's Pick