Area 51 Raid But Make It Fashion: It Takes a Lot to Stand Out at Alien-Themed Festival But This Guy's Tin Foil Hat Is Working

Alien enthusiasts have arrived in hordes to Area 51 for the much-anticipated “Storm Area 51” raid that took the Internet by storm this summer and some of the enthusiasts have definitely come to the famed and allegedly extraterrestrial military base in style.

Case in point? Attendee Daniel Rodriguez, who sported a tin foil hat, to equal reactions of derision and fanfare from both his fellow attendees and those following the buzzy Area 51 raid online.

The tin foil hat looms large in pop culture as a sort of signifier for both the extraterrestrial and those who believe in conspiracy theories, making notable appearances in media like The X Files and M. Night Shyamalan’s film, Signs.

According to Vice, the origin of the tin foil hat came from a short story called “The Tissue-Culture King” by Julian Huxley, a eugenicist and the brother of A Brave New World author, Aldous Huxley. In the story, the protagonist resists mind control by wearing a hat made of metal foil. Now, the term is used to describe those who believe in conspiracy theories, which makes Rodriguez’s accessory fitting for an event that’s rooted in a curiosity about supposed extraterrestrial activity.

While there’s been no alien spotting at the Area 51 raid yet, there’s been plenty of reactions to this tin hat.

See the best of them below. 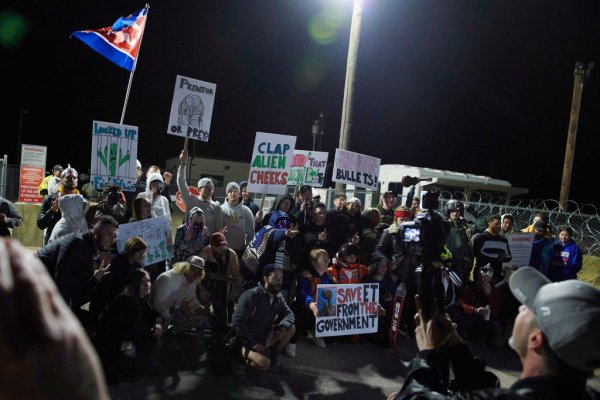 The Signs at the Area 51 Raid Event Are Out of This World
Next Up: Editor's Pick