The Long Debate Over What Counts as a Concentration Camp

When U.S. Congresswoman Alexandria Ocasio-Cortez prompted a public debate in June by using the words “concentration camps” to describe detention centers at the southern U.S. border, historians were quick to jump into the fray. Whether or not they agreed with Ocasio-Cortez hinged primarily on what definition they gave to the term. Those who conceptualized concentration camps simply as civilian mass detention facilities agreed readily with her characterization. Others hesitated, citing the absence of certain forms of brutality or the lack of clear intent on the part of the Trump Administration to create vast territorial zones of extra-legality and isolation.

“Concentration camps” are difficult to define in general terms. Even the survivors of the most notorious and universally recognized concentration camps in history, those of Nazi Germany, discovered this problem in the aftermath of the Second World War. The occasion was an extraordinary effort on their part to condemn the continued existence of inhumane detention systems around the world. In 1949 the French Buchenwald survivor David Rousset founded the International Commission against the Concentration Camp Regime, an organization composed of men and women who had been interned in the Nazi camps for acts of wartime resistance. Over the course of the 1950s, this group of predominantly non-Jewish, Western European survivors carried out pioneering investigations of internment conditions in the Soviet Union, Spain, Greece, China and French Tunisia and Algeria, in order to determine whether concentration camps persisted.

Before it undertook these inquiries, however, the commission needed a cut-and-dry set of criteria — a checklist, as it were — for ascertaining whether various internment systems deserved the name “concentration camp.” In theory, the task should not have been difficult for this group. Every member possessed a wealth of hard-earned knowledge about the topic at hand; several had written moving memoirs of Dachau, Buchenwald, Ravensbrück and other such sites where — in the words of one participant — “evil became virtue and good became undefinable.” Memoirs, though, could draw on metaphor, analogy and other forms of figurative speech. Producing a universal definition that clearly distinguished concentration camps from all other carceral institutions proved a different sort of task altogether.

Rousset and his followers, in contrast to many participants in this summer’s furor over Ocasio-Cortez, were not tempted to define concentration camps solely in relation to the Holocaust. Europeans around 1950 still associated the German Konzentrationslager first and foremost with the detention of resisters and other anti-Nazi “politicals” rather than the mass murder of Europe’s Jewish population. (That murder was largely carried out at other sites, including dedicated death camps such as Treblinka in Poland.) Thus some commission participants initially backed a definition of concentration camps focused exclusively on civilian internment without judicial sanction; others — recalling their own ordeal — urged that slave labor be the deciding criterion.

Still others rejected both of these proposals. The Belgian priest Damien Reumont, a survivor of Esterwegen in Germany, insisted that conditions similar to those of concentration camps could prevail at a detention site even if inmates had been legally arrested and duly sentenced. As for forced labor, he pointed out, not all Nazi camp detainees were compelled to work — while many inmates of “normal” prisons were. Ultimately, he felt, the only meaningful criterion for identifying a concentration camp was its extreme inhumanity. At this assertion, the French ethnographer and Ravensbrück survivor Germaine Tillion revolted. “It is in the nature of all systems of detention,” she asserted, “to torment, offend, [and] wound the humanity of their victims.” No objective line could possibly be drawn between more and less dehumanizing arrangements. Thus, according to Tillion, the issue had to be set aside entirely in favor of structural features such as forced labor.

As Reumont and Tillion’s debate wore on, some commission members threw up their hands at the entire attempt at definition. “We bear the terms of the definition in our flesh, in our blood, in our soul,” declared Léon Mazeaud, a French Buchenwald survivor. “We know too well the odor of man rotting — that, there, is the concentration camp. How could we pass by it without being nauseated? We are sure we will not be mistaken.” Most participants agreed — and yet official criteria were still deemed necessary. After more than a year of discussion, the survivors compromised on a definition that included inhumane conditions, arbitrary internment and “massive forced labor for the profit of the State.” All three characteristics needed to be present for a guilty verdict. Thus the group’s effort to reconcile Reumont’s position with Tillion’s inadvertently set a very high bar — one that would not have been cleared, for instance, by the original turn-of-the-century concentration and reconcentración camps in British South Africa and Spanish Cuba. Those sites were fetid, cruel and murderous, but they did not systematically extract inmates’ labor. Nor, of course, do immigrant detention centers in the US today. If the survivors’ commission were still in existence, would it therefore reject Ocasio-Cortez’s charge? Matters are not so simple. In fact, once the commission began its work in earnest, members overwhelmingly ignored their own criteria. From China to Algeria, they judged various global detention systems via an intuitive sense of how true concentration camps looked, sounded, felt and smelled. The official markers proved irrelevant; what mattered was the nausea that rose in their throats when they inhaled “the odor of man rotting.”

Even when it came to retrospective assessment of their own past experiences, as the 1950s went on formal definitions proved less compelling than did the survivors’ moral instincts. One story illustrates this point in terms unnervingly germane to today’s controversy. The commission possessed a full-time legal counselor, a French lawyer named Théo Bernard. Bernard had survived the war in Drancy, an internment and transit camp for Jews just outside Paris, and was thus only an adviser to the commission, not a member: Drancy did not qualify as a concentration camp, since no large-scale forced labor occurred there. This meant Bernard did not count as a concentration camp survivor. The young lawyer accepted this — most of the time. But whenever he wrote or spoke about the camp’s numerous unaccompanied children, he slipped. Remembering the “six-year-old heads of household” who had haunted Drancy’s grounds, dragging dirty blankets, struggling to protect younger siblings, he simply could not refrain from calling the place a concentration camp. “I do not believe that anything worse ever existed,” he observed. And what was the phrase “concentration camp” good for if not to signify this judgment?

Most historians today do deem Drancy a concentration camp. Definitions have changed. Such mutability does not mean that efforts to pin down hard-and-fast criteria — efforts like that of the International Commission in 1950 or of American scholars this past June — are futile or quixotic. We need words to possess specific meanings if they are to help us describe reality. But perhaps it is also worth admitting that, in a post-1945 world, the epithet “concentration camp” possesses a rhetorical power, a moral force, that, in the end, simply exceeds definition. We do not only use it, after all, as an impartial analytical tool. Rather, we reach for it in an effort to express our disgust or dismay. We utter it in hopes of sounding the alarm that a sickeningly familiar odor, a smell reminiscent of decaying human decency, hangs heavy in the air.

Emma Kuby is the author of Political Survivors: The Resistance, the Cold War, and the Fight against Concentration Camps after 1945 (Cornell, 2019). 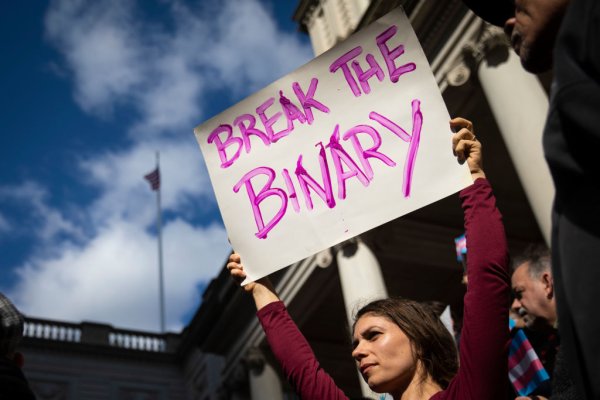 Merriam-Webster Adds Gender-Neutral Pronouns to Dictionary
Next Up: Editor's Pick