What Is Happening at Migrant Detention Centers? Here's What to Know

In light of recent reports of overcrowded and unsanitary conditions at migrant detention centers run by U.S. Immigration and Customs Enforcement and other federal agencies, top Democrats have summoned the acting commissioner of U.S. Customs and Border Protection and the acting Secretary of Homeland Security to testify before the House Oversight Committee.

On Friday, the House Oversight Committee is hearing from the DHS inspector general — whose office issued a report on July 2 that detailed “dangerous overcrowding” at CBP detention facilities. Additionally, the panel will hear testimony from former acting ICE chief Tom Homan, as well as four Democrats who visited the border: Reps. Veronica Escobar, Alexandria Ocasio-Cortez, Ayanna Pressley, and Rashida Tlaib.

Migrants are gathered inside the fence of a makeshift detention center in El Paso, Texas on Wed. March 27, 2019.
Sergio Flores—The Washington Post/Getty Images

Adults and children have been held for days, weeks, or even months in cramped cells, sometimes with no access to soap, toothpaste, or places to wash their hands or shower. Some reports have emerged of children sleeping on concrete floors; others of adults having to stand for days due to lack of space. A May report from the Department of Homeland Security’s inspector general found 900 people crammed into a space designed to accommodate 125 at most.

At an Arizona CBP facility, a 15-year-old girl from Honduras reported that an officer groped her during a patdown in front of other migrants and officers.

Babies have to drink from unwashed bottles and there are not enough diapers. They are subjected to “extreme cold temperatures” with “lights on 24 hours a day,” a pediatrician who has treated migrant children told CNN. There have been outbreaks of flu, lice, chicken pox and scabies.

On Wednesday, the committee heard testimony from Yazmin Juárez, an asylum seeker from Guatemala whose daughter Mariee died after being held in an ICE detention center.

“I noticed immediately how many sick children there were in detention, that no effort was being made to separate the sick from the healthy,” Juarez said in her congressional testimony.

Within a week of their arrival at an ICE facility, Juarez’s daughter Mariee developed symptoms including a fever, cough, diarrhea, and vomiting. “I begged them to do deeper exams, but they [the detention facility’s medical staff] sent us back to our room,” she told Congress. At one point, the staff treated 19-month-old Mariee with Vicks VapoRub, which is not recommended for children under 2.

After about ten days, mother and daughter were released from the ICE detention center, and sought further medical care. Mariee was hospitalized for six weeks, during which time she was diagnosed with a viral respiratory infection and placed on a ventilator.

“All of the hard work of these doctors came too late,” Juarez said. “Mariee died on what is Mother’s Day in my country. When I walked out of the hospital that day, all I had with me was a piece of paper with Mariee’s handprints in pink paint.”

Juarez is now bringing a $60 million lawsuit against the government for failing to provide Mariee with appropriate medical care.

Who are the people being held there?

More than 50,000 people are currently being held in ICE facilities, while approximately 20,000 are being held in CBP centers. More than 11,000 children are now in the custody of HHS, which holds “unaccompanied children” for an average of 45 days.

Many are fleeing violence in Northern Triangle countries: El Salvador, Guatemala, and Honduras.

How many migrants have died in U.S. custody?

During the Trump Administration, 24 immigrants, including seven children, have died in U.S. custody. It is unknown precisely how many migrants have died attempting to cross the border, although existing totals are likely to be underestimates.

At least 30 children have not been reunited with their parents, according to a report from Democrats on the committee.

Does the current treatment of migrants violate U.S. or international law?

The U.S. also guarantees certain rights to migrant children under the 1997 Flores settlement.

What is the Flores settlement and why is it important?

A temporary facility set up to hold migrants is pictured at a United States Border Patrol Station in Clint, Texas, on June 25, 2019.
Paul Ratje—AFP/Getty Images

In the 1980s and 1990s, lawsuits against the government for mistreatment of unaccompanied children, including 15-year-old Jenny Lisette Flores of El Salvador, culminated in the settlement of 1997. Under the agreement, U.S. immigration and border enforcement agencies would seek to avoid holding unaccompanied for longer than 20 days, during which time they would be provided with:

1) access to food and drinking water; (2) medical assistance in the event of emergencies; (3) toilets and sinks; (4) adequate temperature control and ventilation; (5) adequate supervision to protect minors from others; (6) separation from unrelated adults whenever possible; and (7) contact with family members who were arrested with the minor.

But Flores did not take full effect until over a decade later, when some parts of the settlement/agreement became federal law as a part of the 2008 Trafficking Victims Protection Reauthorization Act (TVPRA).

A federal judge ruled in 2015 that the Flores requirements apply to both unaccompanied minors as well as children who are with their parents.

In 2018, the Department of Justice tried to get the same judge to modify the agreement to allow for indefinite detention, but the request was denied.

What have the agencies done to address backlogs?

U.S. Customs and Border Protection is only supposed to hold people in short-term detention for 72 hours before referring them to the Department of Health and Human Services (for unaccompanied children) and ICE (for all others), but due to backlogs, the limit has been frequently surpassed.

Unable to accommodate increasing numbers of migrants, the agencies have turned to makeshift alternatives, such as constructing tent cities and moving children to an Army base once used as an internment camp for Japanese-Americans during World War II. In Texas, HHS converted a Walmart and a former oilfield worker camp into holding centers for unaccompanied children.

Why was there controversy over sending $4.6 billion to the border?

Both chambers of Congress passed additional funding measures for the border, but the bill initially proposed by the Democratic-controlled House had more restrictions on how the Trump administration could spend the money.

The House ultimately acquiesced, approving the Senate’s less restrictive version before the recess without pressuring the Trump administration into any significant concessions on children in migrant detention facilities.

Four House Democrats refused to vote for the Senate’s version, including Reps. Alexandria Ocasio-Cortez and Ilhan Omar. “Throwing more money at the very organizations committing human rights abuses — and the very Administration directing these human rights abuses — is not a solution,” Omar said in a statement.

Who has Congress called to testify about migrant detention centers?

Kevin McAleenan, the acting DHS secretary, has agreed to testify before the committee on July 18. 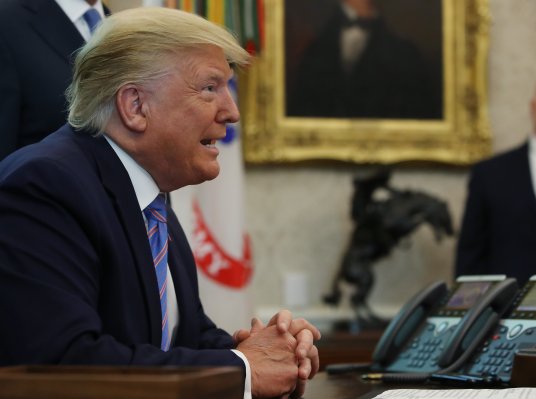 Trump Considers Issuing an Executive Order On Census
Next Up: Editor's Pick