Trump Says Cutting Regulations Is Good for Business. But His New Battle on Car Emission Standards Could Hurt the Auto Industry

President Donald Trump says his latest move to roll back California’s state-level car regulations is going to make cars cheaper and help automakers. But car companies say they don’t want lower standards and experts warn that the changes could even harm automakers who have made major investments in new, green technology.

Speaking at the Environmental Protection Agency on Wednesday, the President announced the elimination of a rule that allows California to set stricter gas mileage standards. The policy shift could have profound implications for the American auto industry. California has more vehicles on the road than any other state. Additionally, a dozen other states and Washington, D.C. follow their emissions guidelines.

The Trump Administration argues that the new policy is both consumer and business friendly, and will make cars cheaper and safer while standardizing the industry.

“Many more cars will be produced under the new and uniform standard, meaning significantly more JOBS, JOBS, JOBS! Automakers should seize this opportunity because without this alternative to California, you will be out of business,” Trump wrote on Twitter Wednesday. The U.S. Justice Department is also conducting an antitrust investigation into a deal between California and four major automakers to lower emissions standards, according to the Associated Press.

However, industry experts say that the President’s view is short-sighted.

Carmakers have already made major changes to their factories in order to meet the guidelines. Experts say that the Trump administration’s changes will disrupt the companies’ production plans, which are years in the making, and make it hard to plan beyond what’s likely to be a protracted legal battle between the administration and blue states – and the 2020 election, says Professor Peter Adriaens of the University of Michigan.

“They’re going to be thrown into disarray. The question is where are all these investments going to go?” says Adriaens.

The Motor & Equipment Manufacturers Association (MEMA), which represents manufacturers of vehicle components, said in statement on Wednesday that it is concerned that Trump’s policy could harm the automobile industry’s competitiveness. MEMA said that the revocation of the waiver will lead to “lengthy litigation” and “will contribute to on-going regulatory uncertainty, which could have damaging effects on industry’s ability to invest and plan for the future and impact industry’s ability to grow jobs.”

MEMA noted that it has urged the National Highway Traffic Safety Administration (NHTSA) and the EPA to come to an agreement with California.

Adriaens says that the changes are also likely to affect the car companies’ positions in the stock and capital markets, and possibly make it harder to sell more fuel-efficient cars.

Ultimately, Adriaens says, companies may be forced to develop and build two fleets of cars – one for the United States, and one for everywhere else – which will be much less efficient.

“What legislation does, is it nudges innovation,” says Adriaens. “It makes total sense from a global market perspective. It just seems that the administration wants the U.S. to be a very different market from the global car market.”

And industry experts say that President Trump’s policy could ultimately make the American car industry much less competitive in a world that is moving towards more fuel-efficient vehicles. Automakers and American workers may be left behind as green jobs and factories move overseas.

Although the policy will encourage Americans to keep buying large cars and to take advantage of the country’s low gas prices, the rest of the world is moving towards more efficient cars, Susan Helper, a professor at Case Western University and the a former chief economist at the U.S. Department of Commerce under President Obama, tells TIME. Ultimately, that means that companies will have an incentive to move factories and some of the best jobs overseas, where they can be closer to the people who are purchasing them.

She warns that the policy may lead to “less innovation and less competitiveness for automakers competing in other markets that do have more sensible gas prices” and push future green jobs overseas.

Helper says that this policy rewards companies for engaging in “irresponsible behavior” such as investing in less fuel-efficient vehicles, or slowing down production of environmentally-friendly vehicles in the United States

Helper argues that the policy will ultimately be a “disaster for having innovative green jobs in the U.S.” and potentially leave the U.S. manufacturers behind China, which is investing heavily in electric cars.

California Gov. Gavin Newsom has promised to take legal action against the changes.

“I’m confident we will prevail eventually. It will take years and years and years, more uncertainty more anxiety,” Newsom said, according to the LA Times. 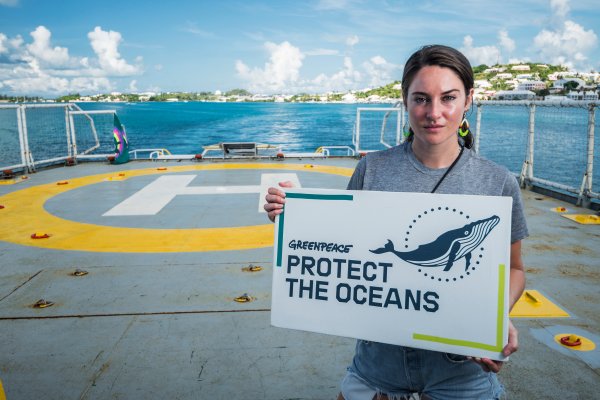 Shailene Woodley: How I'm Changing My Life to Help Save the Seas
Next Up: Editor's Pick