But now, automakers appear to worry the administration may be going too far. The EPA’s determination, they suggest, may lead to a protracted battle between blue states and the administration that leaves carmakers without a clear set of rules.

At the heart of the matter is whether California—and 13 states that follow its lead—can set tougher vehicle emissions standards than the national requirements. Set in 2012, the national standards would have required automakers to reach an average fuel economy of 54.5 miles per gallon by 2025, thereby preventing 6 billion metric tons of greenhouse gas emissions and saving 12 billion barrels of oil. The coalition of states led by California, which had sought more stringent standards, agreed to set its requirements at the same levels. But if the Trump administration rolls back the Obama-era national standards, it would create dueling benchmarks, leading to massive market uncertainty and potentially driving up the price of owning a car.

“We support increasing clean car standards through 2025 and are not asking for a rollback,” said Bill Ford, executive chairman of the Ford Motor Company, and Jim Hackett, the company’s CEO, in a blog post last week. “We want one set of standards nationally, along with additional flexibly to help us provide more affordable options for our customers.”

Pruitt hinted Monday that California will need to come aboard the federal standard at the level set by the Trump administration. That would require negotiations between the federal government—namely, the EPA and the National Highway Traffic Safety Administration (NHTSA)—and California to come up with a standard both sides will accept. If negotiations fail, the EPA might try to revoke the state’s authority to craft its own emissions rules. “Cooperative federalism doesn’t mean that one state can dictate standards for the rest of the country,” Pruitt said in a press release Monday.

Revoking California’s waiver that allows it to set its own standards would prompt a protracted battle in uncharted legal territory. The Clean Air Act gives the EPA authority to grant waivers, but the law is unclear about how they might be revoked. California’s attorney general said in a statement that his office is reviewing the EPA decision and is ready to take legal action.

The uncertainty of a long legal battle would create a compliance nightmare for automakers, with even medium-term emissions regulations up in the air. The Auto Alliance, a trade group that represents U.S. automakers, praised the decision to revisit the standards in a statement but urged the Trump administration to strike a deal with California. “Maintaining a single national program is critical to ensuring that cars remain affordable,” the group said in a statement.

Pruitt justified the rollback, saying that his predecessors set unrealistically aggressive standards. But the move also fits with the Trump administration’s broader stance on global warming. Trump has sought to pare back environmental regulation with an especially aggressive target on climate change rules. In that vein, Pruitt has targeted the Clean Power Plan, an Obama-era rule designed to reduce emissions in the power sector, as well as a rule targeting methane emissions, among others. Officials across the administration often demur when asked about the science of climate change.

Automakers disagree. The Auto Alliance posted a fact sheet following the EPA announcement highlighting the work car companies have made reducing emissions and arguing that progress in the sector remains in line with the goals of the 2015 Paris Agreement, a global deal targeting climate change. Ford touted a recent investment of $11 billion into hybrid and electric vehicles. “Our planet faces increasing challenges, the implications of which are profound,” Ford and Hackett wrote. “The cost of believing it is not real is just too high.” 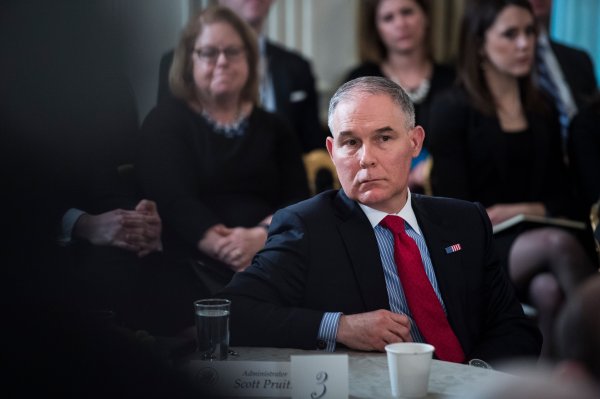