American Beauty Was Bad 20 Years Ago and It's Bad Now. But It Still Has Something to Tell Us

In 2019, beating up on Sam Mendes’ multi-Oscar-winning American Beauty, released roughly 20 years ago this week, is so painfully easy that it seems unfair. The Best Picture winner has fallen largely out of fashion; it rarely appears on critics’ lists of favorite movies, and its memory seems to have faded for most moviegoers, too.

But in 1999, you were an outlier if you disliked the picture, while professing admiration for it was a way of announcing that you were hip to the modern American malaise—whatever, exactly, that was. As screenwriter Alan Ball put it in a 2000 interview, “It’s becoming harder and harder to live an authentic life when we live in a world that seems to focus on appearance.” Even though, by that time, we’d supposedly thrown off the rigid social expectations of the 1950s, Ball noted that “in a lot of ways this is just as oppressively conformist a time.”

Ball wasn’t completely wrong. But what, exactly, is an “authentic life,” and how was partaking of the American Beauty experience supposed to help you live one? American Beauty was a bad movie then, and it’s bad now: Kevin Spacey plays middle-aged suburban husband Lester Burnham, with a good but boring job, who recognizes how empty his life is when he develops an obsession—one he almost acts upon—with his teenage daughter’s school friend, played by Mena Suvari. The debut film of director Sam Mendes (who’d already made his name in the theater world), American Beauty was crafted in the most pristine and soulless way, manicured and buffed to bland tastefulness; it’s one of the most laughably square movies about the destructiveness of conformity ever made.

Characters are saddled with moony faux-philosophical dialogue (“Sometimes there’s so much beauty in the world I feel like I can’t take it”) or signpost language loaded with portent (“All I know is I love firing this gun!”). Generally phenomenal actors give performances as tortured as sailors’ knots: Annette Bening, as Lester’s wife, Carolyn, is a shrill, brittle, sexually repressed mom and real-estate agent, a cartoon stretched to the max. As menacing neighbor Colonel Fitts, Chris Cooper signals “uptight marine” by merely looking constipated. Spacey brings all the edgy anxiety and brittleness his role demands of him, but not even he can negotiate the movie’s unearned “Gosh, life is beautiful after all!” shift, which swerves at us out of nowhere. And the movie’s visuals practically beg for banal student-term paper analysis. Crimson American Beauty roses arranged stiffly in bowls throughout the house, in nearly every scene; a gleaming red front door that’s the only distinguishing characteristic of a house exterior that’s otherwise numbingly restrained; a scarlet blood splatter against a pristine white wall: Block that color symbolism!

Many critics adored American Beauty upon its release, and some surely stand by it today. But mostly, it appears to be one of those movies-with-a-message that people like, or say they like, because it seems like the right stance to take at the time. Maybe it’s more valuable now, 20 years on, as a way of examining what attracts us to certain movies in the first place. Even when movies are not very good—despite how hard they may try to impress us with their labored artistry—they can be a kind of altar where we leave our vague, unspecified feelings of dissatisfaction or unrest. In 1999, the American economy was healthy; job growth was robust, and investors were optimistic. When you don’t have a job at all, your joblessness is your number-one problem. But when you have a good job, you can be nagged by the feeling that it just isn’t enough—it’s a luxury you can afford. And that not-having-enough is the disquiet from which Spacey’s character, Lester Burnham, suffers.

Lester is in his early 40s and lives in a beautiful house, with a beautiful wife. But he’s not just asking himself “How did I get here?” He seems to be pushing for a way out. His teenage daughter, Jane (Thora Birch), barely speaks to him, and their relationship grows icier when she catches on to the erotic crush he has on her friend Angela (Suvari), a lissome, flirty cheerleader who knows exactly why men like her—though she’s also plagued with real-teenager insecurities, and even though she acts as if she’s ready for sex, she’s really not. A new family moves in next door: Dad is Cooper’s uptight, abusive colonel; he’s clearly driven his wife, Barbara (Allison Janney), into catatonia. And his son, Ricky (Wes Bentley), a loner oddball and secret pot dealer with a penchant for surveillance, becomes obsessed with Jane, observing (and recording) her from next door. She’s creeped out at first; then she realizes she kind of likes him, and they begin a romance. None of that happens until well into the film, but the movie opens with a snapshot of the time they’ll eventually spend together: She’s lounging on the bed, complaining about her father. Ricky asks, jokingly or maybe not, “Want me to kill him for you?” She sits up like a suddenly alert cat. “Yeah. Would you?”

This exchange sets the tone of alleged semi-comic darkness, but it’s a jaunty kind of darkness. (The main theme of Thomas Newman’s score, a cascading tumble of percussion and other instruments including tabla, bongos and marimbas, is another signal of the movie’s aggressive, acidic whimsy.) Meanwhile, Lester both flips out and loosens up. He befriends Ricky and becomes a customer. He starts listening to the music of his youth, loudly. (That soundtrack includes the Who’s “The Seeker.”) He essentially quits the job from which he’s about to be fired anyway. He rages at Carolyn, taking her to task for her choice of dinner-table music, referring to it as “Lawrence Welk” crap. (For what it’s worth, the song that inspires this outburst is actually by Bobby Darin, the subject of the 2004 film Beyond the Sea, which Spacey wrote, directed and starred in.) And while Lester thinks he’ll only ever be able to fantasize about Angela—most notably in a now-famous dream sequence where we see her lounging in a bathtub full of rose petals, excellent fodder for all those pencil-nibbling spiral-notebook-essay writers—he does, to his surprise, actually get a chance to be with her. And he doesn’t take it.

You might think that Lester’s lascivious fantasies about Angela are more repulsive now, in 2019, than they seemed in 1999, particularly in light of the allegations that Spacey, as an accused sexual predator, has faced himself. But they’re actually the least shocking, and perhaps the most interesting, feature of American Beauty. That could be because Angela is the movie’s most honest, believable and sympathetic character: She knows how much sexual power she has, and she delights in it. But we’re not invited to view her as a victim, a helpless naïf who’s preyed upon by the gross older dude. The movie knows he’s pathetic, but it also knows that Angela has willingly encouraged his attraction to her—to a point. She is also, of course, a minor, and the law protects young people for good reason. Both parties stop before Lester does the wrong thing; for all his flaws he is, at least, a guy who knows no means no.

Still, Lester’s emptiness has no poetry, no matter how much Ball and Mendes hammer on the idea that their movie is all about the search for a meaningful life. (A few years later, Todd Haynes’ Far From Heaven would address similar ideas far more effectively, and with more heartrending visual grandeur.) As a person who hated American Beauty upon its release, I can’t say whether people who loved it in 1999 will love it more or less today. But I do know that movies can be made only in their own time, and are thus of a piece with that time.

People who aren’t steeped in film might watch an older movie—say, a ’30s comedy or a ’50s melodrama—and decree that it’s “dated,” because the dialogue sounds quaint or strange to them, or the social mores shown on-screen feel antiquated next to our own, or the special effects seem primitive. Nearly all movies bear earmarks of their time; that’s practically the point of making them. No matter how I feel about American Beauty, I could never call it dated—for better or worse, it’s just one of those pictures that struck a chord with people, perhaps because none of us yet knew how bad things could get. The economy could crash. We could end up with a president who’d turn our nation into an embarrassment, maybe even lead it to ruin. Terrorists could fly planes into our most visible skyscrapers. American Beauty, through no fault of its own, couldn’t have pointed the way to those things. But it’s a movie from a time when we didn’t know what we wanted. From where we stand now, the dark, buried desires of affluent suburban men and women, no matter how ludicrously they’re presented, seem even a little touching. Maybe that’s partly because our eyes have been opened to the way so many men—unlike Lester, regardless of how you feel about him—have simply taken what they wanted, with no regard to whom they’re hurting.

American Beauty is a movie about a privileged white guy who feels bad about himself and tries to rectify that by exploding his life—only to lose it all in the end. It’s about a man who thought he had control, but didn’t—and who can’t, at the very least, relate to that? In the context of his own crisis of self-absorption, Lester Burnham couldn’t see the real collision course looming ahead, a future of lost jobs and foreclosures, of madhouse doublespeak issuing from the mouths of people whose job it is to lead us, of wars that can’t be won and thus keep being fought. Maybe it takes a look back at a ridiculous movie to show us how much we’ve really lost. Whatever Ball’s “authentic life” really is, you can bet it’s not being lived on Instagram.

The original version of this story misspelled Thora Birch’s name. 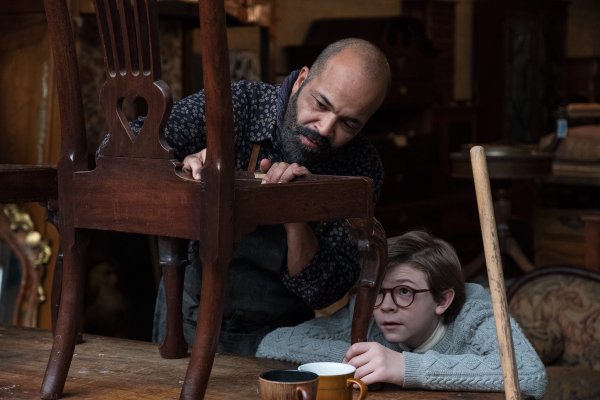 The Goldfinch Is a Uniquely Challenging Novel to Adapt. Here’s Why the Movie Was Doomed
Next Up: Editor's Pick