Life in the present: Greg (Tim Robbins) and his wife Audrey (Holly Hunter) in Here and Now
HBO
By Daniel D'Addario

The funeral-home soap opera Six Feet Under helped form the backbone of HBO’s early-2000s industry-shaking success, and yet it remains far less influential than contemporaries like The Sopranos, The Wire and Sex and the City. The show’s oddball approach was sui generis in its day, and had remained so–until now.

Six Feet Under creator Alan Ball returns to HBO with the new drama Here and Now. It’s a family saga whose gnarled emotions give way to a surprising metaphysical twist, and it advances everything that was so special about Six Feet Under. On that show, a family’s work with the dead filled them with anxiety about how best to live their lives; on this one, a family organized around liberal and libertine philosophy confront the limits of their intellectual framework. Here and Now is aptly titled, as it depicts an identity crisis that’s nothing new–but that feels especially pressing as our own reality grows encroachingly more hostile. At his 60th birthday party, philosophy professor Greg (Tim Robbins), whose teachings urge living in the “now,” takes a moment to reflect on years of activism: “We lost, folks.”

This would be a drag were the characters not so compellingly drawn. Greg and still-avid idealist Audrey (Holly Hunter) began their family with a worthy goal: to make children born around the world feel at home in Portland, Ore. Their family includes three adopted children, from Vietnam, Liberia and Colombia, as well as a biological daughter. But their ambitious mission has run up against multiple snags. For one thing, all four kids–three of them adults now–feel ill at ease in the world. Their strongest connection with their parents seems to be a familiar shade of angst. Raymond Lee, Jerrika Hinton, Daniel Zovatto and Sosie Bacon do a masterful job of building testy sibling chemistry, and Zovatto sells his character Ramon’s plight: metaphysical visions that are either psychosis or a sign from the universe promising some kind of breakthrough. Given the unbelievable upheaval in the world, why not believe in a higher meaning here?

Somehow this large volume of plot–add in the complicated family life of Ramon’s psychiatrist–doesn’t overwhelm. The show’s intensity of focus gives each character his or her space, though the early going is a bit crowded. The execution is more groundbreaking than the concept. This Is Us, as mainstream a hit as television gets in 2018, follows the story of a transracial adoption into adulthood. But This Is Us‘ insights are smothered in sentiment; Here and Now is franker, more unyielding and, as a result, more suited to a tough historical moment.

This show’s willingness to go for baroque, adding on oddity with gusto, recalls the best and–in moments–worst of Six Feet Under. That show’s narrative excesses, applied without real purpose, eventually fell flat. But Here and Now sets forth more confidently. It uses its specificities and surrealities not to shock but to tell a story about wishing things were better, and coming to terms–or not–with the fact that this reality is the only one we’ve got. It’s a show for our time, and one whose sense of dislocation and whose well-wrought family dynamic may outlast it. 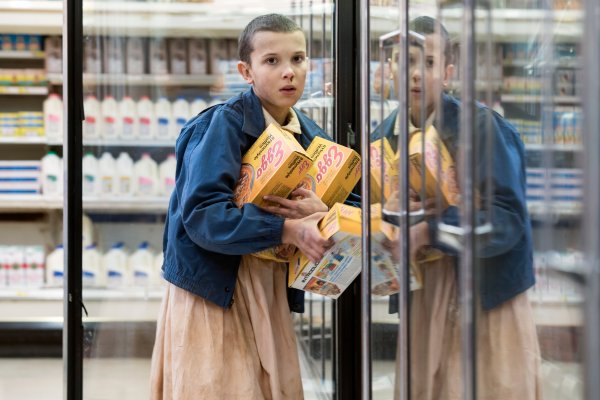 Here's How to Look Back on Your Complete Netflix Binge-Watching History
Next Up: Editor's Pick