Allison Janney wasn’t nominated for an Academy Award this year, but she still managed to be victorious at the Oscars.

Janney, won Best Supporting Actress for her role in I, Tonya at the 2018 Oscars. And despite reports that the Academy was breaking with the tradition of having last year’s winner present the award to their successor, luckily, the Oscars producers appeared to have changed their minds.

Janney was at the awards show ready to present—and have a really good time, too.

She goofed off with nominee Emma Stone on the red carpet:

And rocked out to Queen’s performance featuring Adam Lambert singing “We Will Rock You” and “We Are the Champions” during the opening segment of the awards show:

Perhaps her greatest moment, though, was pranking Entertainment Tonight’s interviewers on the red carpet. According to ETOnline, the Mom star reportedly told ET’s Kevin Frazier and Nancy O’Dell that the Chopard diamonds she wore to the glamorous event required a security detail and pointed to her guard. “He’s very cute. I think he’s single,” she joked. The interviewers then encouraged the “guard” to join the conversation, which is when Janney cracked, explaining that she was kidding. “He’s not my guard. He’s my date for this evening. Now he’s going to be mad at me,” she said, laughing. 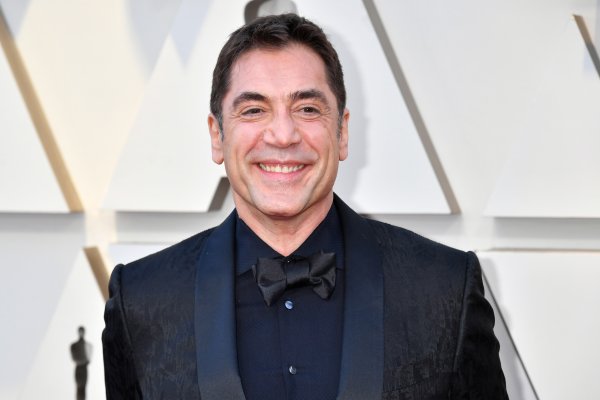 Javier Bardem Proved You Can Have the Most Fun at the Oscars
Next Up: Editor's Pick