China has doubled down on what it has termed a “color revolution” in the restive enclave of Hong Kong, dismissing a hardline minority of protesters as “thugs” attempting to turn the territory into an “independent or semi-independent political entity.”

At a press conference in Beijing Tuesday carried on live news feeds, spokesman Yang Guang, of the Chinese central government’s Hong Kong and Macau Affairs Office, said that the Hong Kong protests “far exceeded the scope of normal assemblies and rallies” and added that they would be considered “violent crimes” in “any country, any region, or under any legal system.”

He also underscored Beijing’s persistent claim that foreign powers are behind the uprising. Radical protesters, he said, were “foot soldiers of external forces and anti-China forces,” bent on “making Hong Kong chaotic and paralyzing the [local] government.”

While acknowledging the right of Hong Kong people to protest peacefully, Yang said violent unrest “gravely endangered the interests” of the territory and was “not at all about expressing any political demands” but instead “political intimidation and hijacking, through and through.”

Striking a more conciliatory tone, he also urged Hongkongers to “focus on Hong Kong’s economic development and improving the livelihood of Hong Kong people, offering their ideas and strategies and working on solutions together. The current crisis reflects Hong Kong’s problems on very deep levels. It’s time to pay attention and figure out solutions.”

His rhetoric will do little to ease tensions in Hong Kong, where a three-month push for greater political freedom shows no sign of abating. Originating as opposition to a divisive extradition bill, the movement has since broadened into a rebellion against the unrepresentative local government, with many protesters demanding self-determination or independence for the semi-autonomous territory, whose 7.2 million inhabitants are culturally and linguistically distinct from mainland Chinese.

The notion of full political freedom for Hong Kong is anathema to Beijing, which resumed sovereignty over the former British possession in 1997, marking the end of 156 years of colonial rule.

Yang’s remarks come after weeks of intensifying unrest in the territory. Over the weekend, protesters lobbed petrol bombs at Hong Kong’s main government office, set fire to barricades on major streets, and fought running battles with police, who responded with tear gas and water cannon. At one point, police fired live rounds as warning shots in the prime retail and tourist district of Causeway Bay.

On Sunday, protesters severely disrupted operations at Hong Kong International Airport, forcing the suspension of train and bus services, leaving arriving passengers with no way of making it into the city center. Yesterday, thousands of high school and university students marked the first day of the new educational year with a class boycott. In the evening, masked radicals briefly clashed with police outside the offices of Hong Kong’s embattled top official, Chief Executive Carrie Lam, and waved a defaced Chinese flag outside the headquarters of the Chinese garrison in a dangerous provocation.

Lam also held a press conference broadcast live Tuesday and said that Beijing had faith in her administration “to handle this difficult matter, and we are also trying our best to do so.” She also stressed that lawbreakers would be brought to justice.

“Hong Kong is a society of law,” she said “so we must use the means of law to handle the illegal activities that have taken place.”

The Hong Kong government has rounded up several prominent activists and democratic legislators in recent days, including the high profile campaigner Joshua Wong, his colleague in the Demosisto party Agnes Chow, and party chairman Ivan Lam.

Wong, who was bailed on charges of unlawful assembly, has vowed never to surrender. “This is the fight of our lives. And we’re going to win. Whatever it takes,” he posted on Twitter. 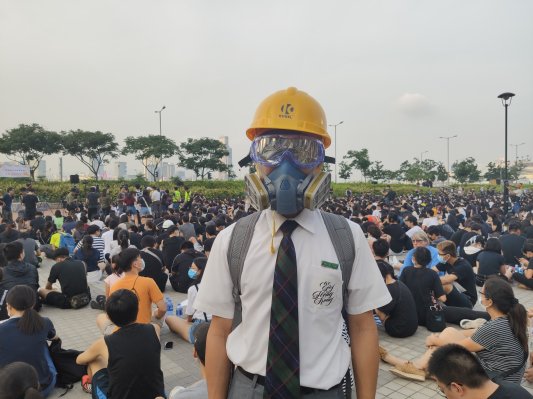