Tropical Storm Humberto finally left the Bahamas on Saturday after dumping rain on parts of the islands that were decimated just days ago by the Category 5 storm Hurricane Dorian.

The Humberto was much weaker than Dorian, which killed at least 50 people, but Bahamian government officials still urged people in damaged homes to seek shelter on Saturday, the Associated Press reported.

A tropical storm warning for the northwestern Bahamas has since been discontinued and no coastal watches or warnings related to Humberto are in effect.

What is the Humberto’s projected path?

As of 5 a.m. on Sunday morning, the Tropical Storm Humberto was moving away from the Bahamas, towards the north-northwest at 7 mph, according to the National Hurricane Center. It was located 135 miles north northwest from Great Abaco with maximum sustained winds of 60 mph.

The storm is expected to strengthen over the next couple of days and turn into a hurricane later on Sunday. But, by then, it will be over open water and no longer be a threat to land.

Although earlier forecasts showed that the storm could move onto Florida’s east coast, it is now expected to stay “well offshore” Florida. A tropical storm watch was originally in place for east-central Florida, but it was discontinued late on Friday night.

“Since the forecast track has shifted farther to the east, the chance of heavy rainfall affecting the southeastern United States has diminished,” the National Hurricane Center said.

What effects will Tropical Storm Humberto have?

Most of the heaviest rain occurred north and east of Center as winds of 40 miles per hour hit the island. The Bahamas is expected to receive one to three inches of rain through Monday with up to six inches in some areas.

“Gusty winds” are still affecting northwestern parts of the islands, according to the National Hurricane Center. These winds are expected to subside later on Sunday.

Swells that could cause life-threatening surf and rip current conditions will affect the northwestern Bahamas and the southeast coast of the U.S. from east-central Florida to North Carolina over the next few days.

Aid efforts were temporarily affected ahead of the storm, the Associated Press reported.

Fewer meals were distributed in Grand Bahama and a spokesman for the United Nations World Food Program told the AP all flights into its logistics hub in Marsh Harbor in Abaco were suspended. Later on Saturday, the agency resumed their activities.

Dennis Feltgen, a meteorologist and the communications and public affairs officer for the National Hurricane Center, told TIME on Saturday that the storm is “not, fortunately, in the league of Dorian. But as far as the Bahamas are concerned, heavy rainfall and tropical storm force winds is not helping at all. It seems like nature’s added a little insult to everything,” Feltgen says.

“This would make a very difficult situation even more difficult,” Feltgen says of the communities impacted by Dorian.

The storm may have one “silver lining,” Feltgen says—unlike Dorian, it’s not expected to cause major storm surge in the northwestern Bahamas.

How did Hurricane Dorian affect the Bahamas?

The Abaco Islands suffered some of the most severe damage during Hurricane Dorian. Witnesses on the largest island, Great Abaco, at the time of the storm said that many homes were flooded, damaged or completely destroyed by Dorian’s wind, storm surge and heavy rain, and some residents were left without food, water and proper sanitation. Businesses and island infrastructure were damaged during the storm, and some island residents resorted to looting in order to survive. 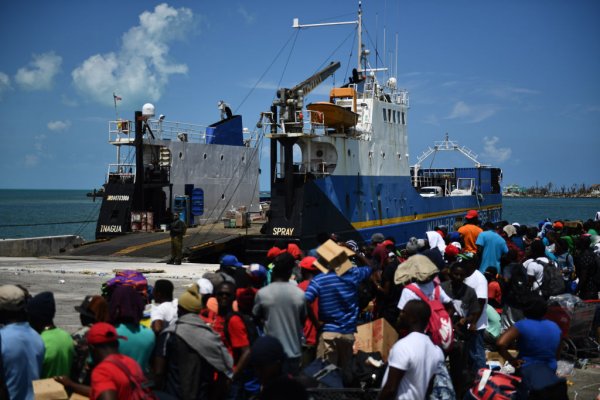 CBP Says it Will Accept Any Evacuees on Humanitarian Reasons After Dorian
Next Up: Editor's Pick