Joe Biden Suggested People Keep the 'Record Player on at Night' During 2020 Debate. The Internet Had Thoughts

Former Vice President Joe Biden referenced record players while answering a question during Thursday’s 2020 Democratic debate about how to repair the legacy of slavery — and the internet collectively scratched its head.

Moderator Linsey Davis of ABC brought up Biden’s 1975 statement that he’d “be damned if I feel responsible to pay for what happened 300 years ago” and then asked him “What responsibility do you think that Americans need to take to repair the legacy of slavery in our country?”

“Look, there is institutional segregation in this country,” the 2020 Democratic primary front-runner said, continuing to address racial inequality in the educational system. Suggesting that investing in teachers and social workers would help “make sure that every single child” goes to school and has better opportunities, he went on to say the following:

“It’s not that [some parents] don’t want to help. They don’t know what quite to do: Play the radio, make sure the television… make sure you have the record player on at night.”

While it wasn’t clear whether Biden meant that parents should or shouldn’t play the record player at night, it was immediately clear that the contender for the nomination had brought up a piece of equipment that became outdated more than two decades ago (though the record player and vinyl records have seen a resurgence in recent years among millennials).

Biden has had viral moments in the previous debates as well, most notably directing viewers to “go to Joe 3-0-3-3-0” in his closing remarks of the previous debate in Detroit on July 31. He meant to encourage texting the number JOE-30330, but he phrased it like a website, and the internet quickly latched on.

Naturally, Twitter users made connections between the statements — while others just couldn’t help but joke about Biden’s dated reference.

“Everyone please take out your record players and text JOE 30330,” wrote one user.

“Alexa, turn up the record player,” joked another.

Here are some of the best Joe Biden record player tweets from viewers of Thursday’s debate. 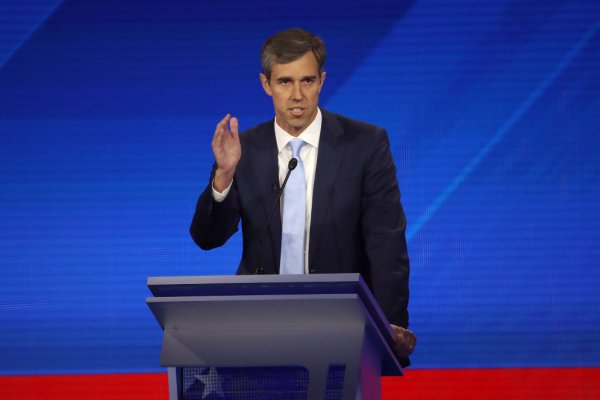 'Hell Yes' Beto Wants to Take Your AR-15
Next Up: Editor's Pick