All eyes were on frontrunner Joe Biden ahead of Wednesday’s Democratic primary debate. And just before the broadcast ended, the former Vice President offered up some campaign information that was accidentally — to use his words — a “bunch of malarkey.”

As Biden delivered his closing statement, he declared, “If you agree with me, go to Joe 3-0-3-3-0 and help me in this fight.” The last candidate to speak, it was essentially the final message of the second round of debates for the 2020 Democratic presidential nomination.

While there certainly is a Joe Biden campaign website, it’s not Joe30330.com. (His official website is actually just JoeBiden.com). 30330 is, however, the text prompt for his campaign.

TIME sent a text to the number 3-0-3-3-0 and received a typical promotional campaign message in return. “Joe was AMAZING at the debate,” it said. “Now, Donald Trump is going to aim all his resources at defeating us. So we are counting on a MASSIVE rush of donations to elect Joe and take down Trump.”

Biden, 76, also quickly promoted the correct information on his social media after the debate.

As expected, what began as general confusion on the internet as people searched for the website eventually turned to comedy on Twitter.

Others were more generous in response to Biden’s flub, taking to Twitter to defend the simple mistake.

Sharing comedian Trevor Noah’s tweet, which advertised debate coverage at “30330 pm,” Biden’s team eventually got in on the joke, too. “We’ll tune in, but make sure you text JOE to 30330,” the @TeamJoe account said.

The mix-up also prompted clever internet users to buy previously open domain names involving ‘Joe’ and some combination of the numbers he called out. As of Wednesday night, joe33030.com now redirects to Biden’s actual campaign site. But unfortunately for his campaign, joe30330.com redirects to a mock campaign website that claims to be paid for by “Josh for America Excretionary Committee.”

That viral closing statement moment wasn’t Biden’s only verbal flub of the night. Earlier in the debate, he mistakenly called Senator Cory Booker “president,” before correcting himself: “Excuse me, the future president,” he said.

He also received some blowback for calling criticism of Obamacare “a bunch of malarkey.” 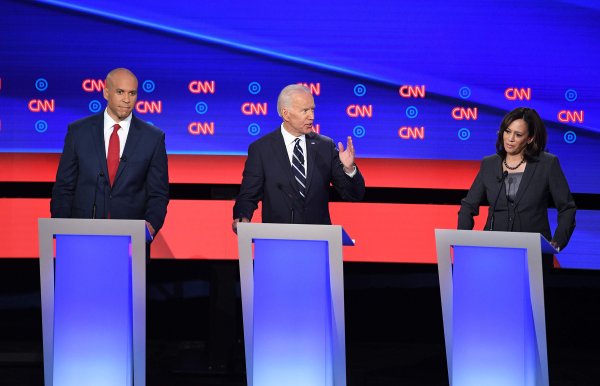 Biggest Moments From Debate Night Two
Next Up: Editor's Pick