Advisers to Democratic front-runner Joe Biden are lowering expectations for his prospects in Iowa and New Hampshire, telling reporters Tuesday that the campaign does not have to win the key early nominating contests and is focused on Super Tuesday states that cast ballots in March and beyond.

The comments come more than five months from Iowa’s lead-off caucuses, at a moment when Biden is leading not only nationally but also in polling averages in both states. They suggest that Biden’s campaign is trying to prepare supporters for a long, arduous nominating fight that could see the former Vice President falter in the first nominating contests.

In a phone call Tuesday, three top Biden hands argued he would still be a competitive contender even if he comes up short in Iowa on Feb. 3 and New Hampshire on Feb. 11.

“Do I think we have to win Iowa? No,” one of the campaign’s briefers told reporters.

Sen. Elizabeth Warren has emerged as a top contender in Iowa, while both Warren, who hails from Massachusetts, and Sen. Bernie Sanders of Vermont come from states bordering New Hampshire and have built strong organizations there.

“There’s an incredible home field advantage for a Massachusetts candidate or a New Englander” in New Hampshire, a second briefer said.

The last time a Democratic presidential candidate won the nomination after losing both Iowa and New Hampshire was in 1992, when Arkansas Gov. Bill Clinton posted a dismal 3% in Iowa’s caucuses and came in second, with 25%, to Sen. Paul Tsongas of neighboring Massachusetts.

As Biden’s brain trust sees it, the race could be a three- or four-way slog after Super Tuesday. Biden’s advisers expect Warren and Sanders to remain in the race at least until that point. In all, about a third of the total delegates will be selected on Super Tuesday from states including California, Texas and several in the South.

But, the Biden team argues, Super Tuesday will not be an end to the campaign even if they go 0-for-4 in February. (Nevada and South Carolina follow Iowa and New Hampshire later that month.) According to data compiled by the delegate-tracking site The Green Papers, only about 40% of the delegates will have been decided by that point.

Biden campaign aides, who have argued the former Vice President is best positioned to defeat President Donald Trump, are careful to keep their rhetoric focused on the general election in November 2020. Speaking to reporters, they touted Biden’s potential to beat Trump in states he won in 2016, including Pennsylvania, Wisconsin, Michigan, Florida, Georgia, North Carolina and Arizona.

While Biden still leads in polls of the crowded Democratic field, he has shown signs of fragility. In Iowa, Warren, Sen. Kamala Harris and and South Bend, Ind., Mayor Pete Buttigieg have been gaining ground, while Sanders’ loyalists have experience with the arcane caucus system after battling Hillary Clinton in 2016.

The “home field advantage,” as Biden’s team phrased it, may prove too much in New Hampshire to stop Warren or Sanders. Candidates like Sens. Cory Booker and Amy Klobuchar and former Rep. Beto O’Rourke have been logging long days and assembling impressive campaign teams. The fact that Biden is seeking to downplay expectations this far out from Iowa and New Hampshire signals that the campaign may see its odds in the opening contests getting longer. 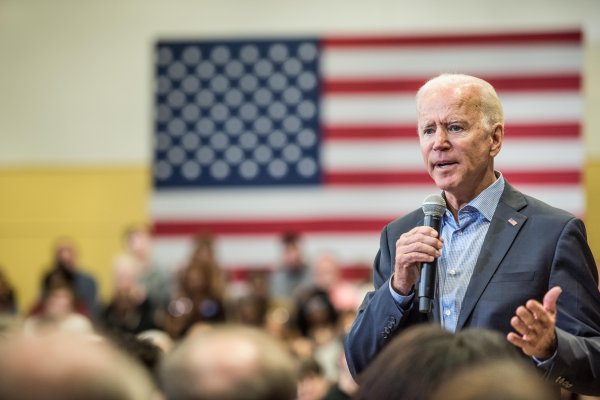 Biden Teeters Atop Democratic Field
Next Up: Editor's Pick