President Trump Made a Live Speech During the Democratic Debate. The Networks Didn't Bite

President Donald Trump made a speech to House Republicans in Baltimore at the same time as the third Democratic debate. But viewers watching cable at home didn’t see that.

While ABC ran the Democratic debate, none of the other major networks carried Trump’s remarks at the House Republican Conference Member Retreat Dinner live. Trump took the stage in Baltimore just after 8 p.m. Eastern, about an hour behind schedule, right as the Democratic debate began.

During a speech that lasted more than an hour, Trump ranged from talking about his former opponent Hillary Clinton to illegal immigration to plastic straws and homelessness in California. “Our country will go to hell if any of these people get in,” he said of the Democrats running for president.

He also targeted some of his prospective Democratic opponents by name. “I hit Pocahontas way too early,” he said, referring to Massachusetts Sen. Elizabeth Warren. “I thought she was gone. She’s emerged from the ashes and now it looks like she could beat Sleepy Joe, he’s falling asleep. He has no idea what the hell he’s doing or saying,” Trump continued, referring to Vice President Joe Biden. He also called Vermont Sen. Bernie Sanders “Crazy Bernie” and made exaggerated pronunciations of South Bend, Ind. Mayor Pete Buttigieg’s name.

Before he left for Baltimore, Trump told reporters he would have the Democratic debate recorded to watch later. “I look forward to going home,” Trump said. “I’m going to have to watch it as a rerun.”

Thursday marked Trump’s first trip to Baltimore since he criticized the city in July as a “disgusting, rat and rodent infested mess.” 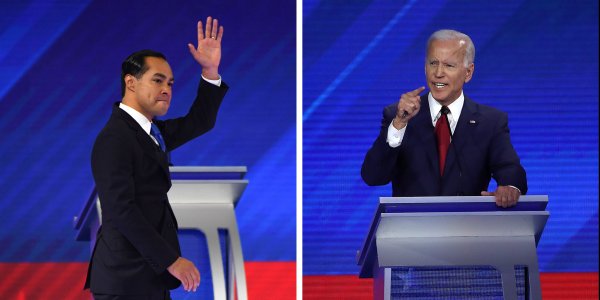 Fighting Over Obama's Legacy
Next Up: Editor's Pick