'It's Sad That Her Name Has Become a Joke.' What to Know About the Real Pocahontas

The only surviving record of Pocahontas sitting for a portrait in England in the early 1600s is an engraving by Simon van de Passe, which is part of The National Portrait Gallery's collection.
Photo by Universal History Archive/UIG—Getty Images
By Olivia B. Waxman

President Donald Trump sparked controversy on Monday when, at an event meant to honor Native American veterans of World War II, he referred to Massachusetts Senator Elizabeth Warren as “Pocahontas.”

“This afternoon, in the Oval Office, Donald Trump was supposed to be honoring Navajo code talkers — American heroes who helped save the world from fascism and hate during World War II,” Warren said in reaction, in an email to her supporters. “Instead, Trump stood right next to those Native American war heroes and came after me with another racist slur.”

Pocahontas has been used before by Trump as a shorthand to attack Warren, whose Native American heritage he and others have questioned in the past. While the President’s statements on Monday caused a new round of controversy, his statement is also part of a four-century-long history of using “Pocahontas” as a stand-in for a wide range of Native American experiences.

“She’s probably the only Native American woman whose name we all know; they’ve been so wiped out of history,” says historian Camilla Townsend, author of Pocahontas and the Powhatan Dilemma. “It’s sad that her name has become a joke that Trump and others use because her real life was so difficult and frightening and she had to make decisions so much rougher than any of us had to face.”

Below is a brief look at what historians know about what her life was really like.

Her name wasn’t even Pocahontas

Born in the 1590s and raised a member of the Pamunkey tribe in Virginia, she actually went by “Amonute” or “Matoaka,” and Pocahontas was a nickname thought to mean “playful one.” She was the daughter of the chief of the tribe, Powhatan, and grew up in the tribe’s capital Werowocomoco, located along the Pamunkey (now York) River.

It’s probably true that Pocahontas and John Smith, a leader in the colony of Jamestown established in 1607 by the Virginia Company of London, worked closely together and served as liaisons to each other’s communities. But — though the Disney version of Pocahontas may have convinced many people otherwise — their relationship was probably not romantic. After all, Pocahontas is now thought to have been about 10 or 12 years old when she met the English colonists.

They probably served as each other’s translators and teachers, giving each other informal language lessons, as some of Smith’s writing shows them repeating the same sentences in Algonquian and English, Townsend tells TIME. In some respects, her role shows how some Native American women in this period had more authority than English colonial women. “Would the English ever have taken a 10-year-old girl and turned her into a translator? No,” says Townsend. And her role was an important one, as she would have facilitated important trade relationships.

In one of Smith’s accounts, he talks about being captured by Native Americans a few months after arriving and says Pocahontas saves him from being killed by her father. But “that’s classic John Smith,” says Townsend. “He always says half-naked girls rescued him, that it happened in Africa and Asia.”

Plus, more recent research into tribal rituals suggests that the episode Smith described may have been a ceremony in which Pocahontas acted a prepared part. It’s also possible that the experience was meant to send a particular message to Smith and the other settlers by reminding them of Powhatan’s authority — a message that may not have gotten across due to cultural prejudices. “[Smith’s] presumption,” says Peter Mancall, an expert on the history of Native Americans at the University of Southern California, “is that that doesn’t make any sense because the English are superior.”

In fact, it was the English who kidnapped her

During a period of simmering fighting between the settlers and Powhatan’s people, Pocahontas was held prisoner for a year. “The way to get out was to marry the enemy and convert to Christianity,” explains Townsend. “We don’t know if it was her father’s idea but he was consulted through messengers, and it was his decision to go forward with it.” Around 1614, she was baptized “Rebecca,” converted to Protestantism and married John Rolfe, who is best known for bringing a profitable form of tobacco farming to Virginia.

She and her husband were then brought back to England by the Virginia Company to prove to investors that immigration and investment were safe ventures, and that the Native Americans in Virginia were at peace with the settlers. The company needed to be able to point to her as a “good Christian” with a son. Her marriage also appeared to be more strategic than romantic. “Rolfe, at one point, in one of the odder ways of describing a romantic relationship, refers to his marriage to Pocahontas, as ‘holy work,’ meaning he’s going to help spread the English Christian message through this marriage,” says Mancall.

“The only written descriptions we have of her there are of her being quite miserable,” Townsend says, “and then she gets sick and dies.”

The only surviving record of Pocahontas sitting for a portrait in England in the early 1600s was for an engraving by Simon van de Passe that is now in the National Portrait Gallery’s collection.

“Dressed like an English woman, and having taken the name Rebecca, [Pocahontas in] this picture tells the English that their idea that they can convert native people will work, and Pocahontas is living proof of that,” says Mancall. As he points out, the English colonies were in trouble at the time, so the Virginia Company needed someone like Pocahontas to help turn things around.

“That engraving is really important because she becomes an object lesson to the English about the deeper truth and meaning of their colonial project,” he says. The lesson, he says, came from the transformation of a Native American girl into an English woman — and, largely after she died, into a symbol of her entire people. 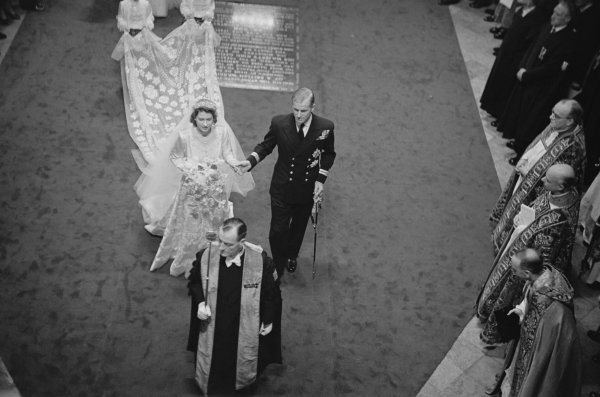 See How Queen Elizabeth and Prince Philip Created the Modern Royal Wedding 70 Years Ago
Next Up: Editor's Pick