How the U.S. Turned Its Back on Puerto Rico

Stillness is drenched in humidity and scorched by a sun blasting down from the clear skies that will eventually follow a hurricane. But on this island of 3.4 million people, the quiet after Hurricane Maria had a distinct feeling of absence, an inattention bordering on obliviousness.

The fifth strongest storm ever to strike the U.S. hit Puerto Rico on Sept. 20 with stronger winds than Irma brought to Florida and the kind of rain that Hurricane Harvey dumped on Houston. It made landfall on a Wednesday, and in the digital age, its effects were well documented by Friday: parts of San Juan, the capital of this U.S. territory, were underwater. The verdant island was stripped of its foliage. U.S. citizens lapped water from natural springs. But on the mainland, the topics of the day were a special election in Alabama, the latest GOP stab at repealing Obamacare and a fight President Donald Trump had picked with the NFL.

Belkis, 42, right, and her daughter remove damaged belongings from their flooded home in San Isidro, Puerto Rico, on Sept. 28, 2017.
Andres Kudacki for TIME

“Puerto Rico, which is part of the United States, can turn into a humanitarian crisis,” its governor, Ricardo Rosselló, warned on Sept. 25. One day later, a poll showed that almost half of Americans did not know that Puerto Ricans are American citizens. “When we speak of a catastrophe, everyone must be treated equally.”

After winning plaudits for their smooth, coordinated responses in Texas and Florida this past summer, the feds were not exactly caught flat-footed in the Caribbean. Two weeks before Maria hit Puerto Rico, which was preparing for Hurricane Irma to hit, FEMA had about 124 staff members deployed there and in the Virgin Islands. Water, meals, cots and blankets were pre-positioned in San Juan.

But the scale of the devastation–combined with the inattention of the White House–generated a tableau that critics described as evidence of neglect or worse. Pushed onto the defensive, the White House hastily arranged a presidential visit to the U.S. Virgin Islands and Puerto Rico for Oct. 3. “No gasoline, no water, no nada,” says Reynaldo Valdez, 57, driving through a San Juan that looks as though it’s been raked.

Maria made landfall on the island’s southeastern corner, with sustained winds of 155 m.p.h. That’s more force than that of most tornadoes. This particular cyclone covered the entire island, which is 40 miles at its widest point. “Imagine if a hurricane started in Florida and ended up in Washington State,” NASA disaster official Miguel Román pointed out. “That’s what we’re dealing with here.”

As meteorologists watched the satellite imagery–radar had been knocked out–Maria stuttered across the island. The inland hills that rise more than 3,000 ft. above the heart of Puerto Rico were drawing moisture out of the storm, which loosed torrents of rain. Flash floods tore through valleys, and hillsides collapsed, pulling down houses already shorn of their roofs. Roadways were turned into tunnels as trees on both sides fell into one another. The entire electricity grid came down, taking with it the pumps that supply drinking water.

A week after the storm, 16 people were reported dead, and 44% of residents lacked potable water. A massive relief operation was under way–the military planned 240 flights to the Virgin Islands and Puerto Rico in one 24-hour period–but in a territory nearly the size of Connecticut, the challenge was getting the help to remote areas.

A man who has lived in San Isidro, outside the Puerto Rico capital since he was nine years old, stands for a portrait in his neighborhood, torn apart by Hurricane Maria, on Sept. 28, 2017.
Andres Kudacki for TIME

Officials warn that it may be months before power is restored across the island, not least because the grid had decayed as the territory’s government was engulfed by a metastasizing debt crisis over the past few years. But while Trump tweeted about the island’s debts to Wall Street, officials understood that Maria had also left behind the gift of leverage. More Puerto Ricans now live on the mainland than on the island. Migration, already up markedly in recent years, may surge to new heights if swaths of the territory remain unlivable.

“If we want to prevent, for example, a mass exodus, we have to take action,” Rosselló said. “Congress, take note: Take action. Permit Puerto Rico to have the necessary resources.”

Outside the shuttered hotel she manages in the capital’s beachside Condado district, Evel Torres reinforced the point. “Everything is closed in Puerto Rico,” she told me with a smile. “I’m going with you to the States!” 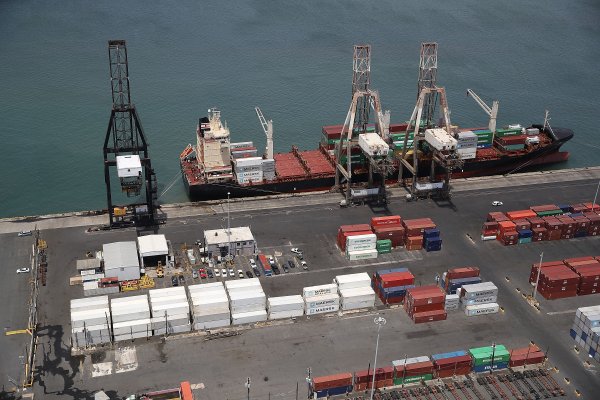 Help for Puerto Rico Is Being Delayed by the Jones Act. What's That?
Next Up: Editor's Pick