An art exhibit at Burning Man that featured Barbie dolls in a representation of a concentration camp has incited outrage, with many criticizing the art for trivializing the Holocaust.

The exhibit, titled “Barbie Death Camp and Wine Bistro,” features hundreds of naked Barbies that are being led to ovens, crucified on pink crosses, or taken apart and scattered around the ovens, according to the The Times of Israel. The exhibit also features toy soldiers who are holding guns and a sign that reads, “arbeit macht plastik frei,” a seeming reference to the sign above the gate at Auschwitz, the Nazi concentration camp, that read “work makes you free.” The sign also stated that the camp was presented by “Auschwitz Inc.”

Backlash against the exhibit was so great that the Anti-Defamation League has opened an investigation about it.

According to J. TheJewish News of Northern California, the exhibit was created by 65-year-old Jewish artist James Jacoby, who’s staged the camp at Burning Man for the past 20 years and is well-aware of how it could offend viewers, but denies that he was minimizing violence against Jews.

“We certainly don’t want to trigger anybody,” Jacoby said. “But Burning Man is not a safe space. It’s not Yale University. You don’t get to run and hide from something you don’t like. There’s 1,100 theme camps. If you don’t like ours, go to another one.”

Burning Man, which began on San Francisco’s Baker Beach in 1986, is known for its embrace of the counterculture. 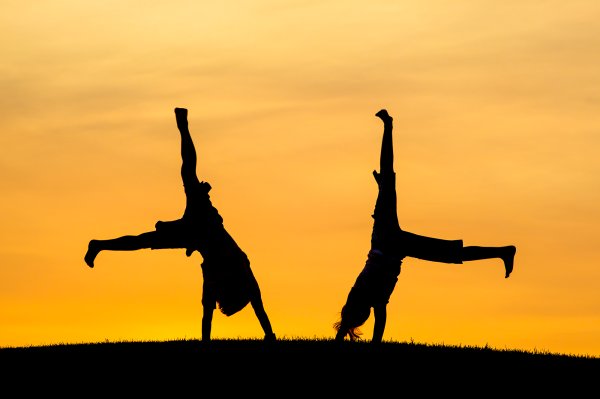 Everyone's Flipping Out Over These Insanely Talented Cartwheeling Kids
Next Up: Editor's Pick