U.S. Stores Are Asking Customers To Stop Openly Carrying Weapons—But Can They Actually Enforce a Restriction on Guns?

Supermarket and pharmacy chains across the U.S. have begun asking customers to not openly carry firearms in their stores, including in states where open carry is legal. It’s a trend that appears to have been sparked by Walmart, whose CEO Doug McMillon announced the decision on Tuesday following a string of mass shootings around the country — including the Aug. 3 shooting in which 22 were killed at a Walmart store in El Paso, Tex.

McMillon announced on Tuesday that Walmart would stop selling handguns and military-style rifles. In the same statement, he requested that customers no longer openly carry firearms into Walmart stores. Several other chains have followed suit. As of Friday, Kroger, CVS, Walgreens and Wegmans had all issued similar statements of their own.

Given the potential ambiguity of their language — that the chains are “requesting” customers leave guns at home, and “prefer” not to see weapons carried — the statements bring into question exactly how store employees will go about enforcing their new guidelines. “Asking customers not to openly carry firearms in stores isn’t exactly a policy,” says David Yamane, a sociologist at Wake Forest University and expert in American gun culture and policy. “You haven’t prohibited [it] from happening.”

What’s needed is more clarity, so employees and customers aren’t confused, Yamane says. “People can say, ‘This is just a request. I can carry until you tell me not to.'”

A spokesperson for Walmart tells TIME that management will soon receive guidance and training on exactly how to deal with customers who walk in to a store with a weapon. While it’s unlikely that a Walmart employee be tasked with stopping customer to check if they have a gun (and asking them to leave if so), Walmart store managers will apparently be tasked with judging each situation on its own merits.

For example, if a person, or even multiple people, are carrying firearms openly in a store but other customers and associates don’t report feeling unsafe, a store manager could allow them to continue carrying the guns. If people report feeling uncomfortable, however, managers would follow various protocols to resolve the situation, the spokesperson said.

At CVS, the details on its new announcement are still being hammered out, according to a company spokesperson. “It’s important to note that we neither expect nor encourage employees to confront a customer who chooses to enter a store with a firearm,” a statement provided to TIME reads.

Representatives for Kroger and Walgreens did not immediately answer TIME’s request for comment; a spokesperson for Wegmans declined to comment.

Jeffrey Sonnenfeld, a professor at the Yale School of Management, says that as private businesses, Walmart and other stores have the right to post signage completely banning firearms and to enforce that rule through trespassing laws and other regulations. “There’s no guaranteed second amendment in private property,” he says.

Sonnenfeld speculates that, noting that instead of going that route right away, the stores are “going to try the voluntary approach at first and see if that works.”

For the moment, then, the stores are essentially politely asking people to leave their guns at home before heading to buy food or pick up prescriptions. Whether the policy changes will likely depend on how shoppers react, Yamane adds.

“Most gun owners are responsible and respectful of fellow citizens, and if Walmart doesn’t want them to openly carry, they won’t,” he says. “But you’ll have a small minority of people who will openly carry rifles because in any group of people, you’ll have people at an extreme who will test those limits.” 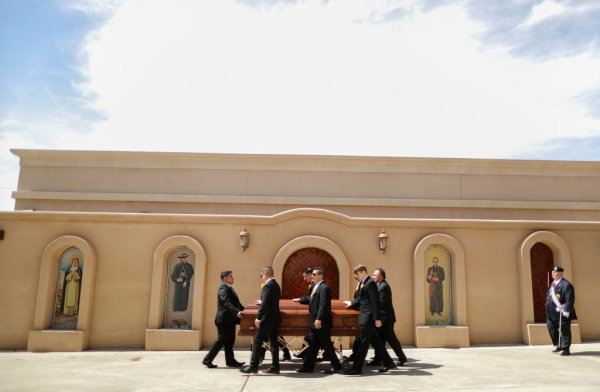 Background Checks Won't Stop Shootings, But Are Needed
Next Up: Editor's Pick