'How Do I Even Start That Conversation?' How the First Woman to Publicly Accuse Larry Nassar Approached Intimacy After Abuse

In 2018, the world saw me speak at Larry Nassar’s sentencing, describing the impact of the sexual abuse he had perpetrated against me when I was 15 years old. Ten years before that, I was just trying to figure out how to move forward with my life. I had entered my 20s, and despite everything that had happened, I was open to dating. At the same time, I didn’t see the point in getting involved romantically with someone I knew I couldn’t stay with forever, and the right person had yet to come along.

That changed when I met Jacob in 2008. We’d met online through a mutual friend, who’d shown Jacob my blog. We quickly began discussing current events, beliefs, life goals and ambitions, developing a rich friendship despite never having met or even seen photos of each other. We exchanged over 900 pages of emails, yet always had more to talk about. When he made it clear that his desire was to prayerfully consider transitioning into a serious relationship, I was cautiously optimistic. He didn’t want to pressure me, but he also had no intention of leaving me wondering and unsure, and I was grateful for that.

A week before we met in person for the first time, I thought eagerly about all the questions I had, everything I wanted to know about who Jacob was and how we would navigate being together, if we decided to move in that direction. There was the distance between us (he lived in Canada, I lived in Michigan) and whether one or the other of us would be willing to move if things progressed, for starters. And . . . that. I’d have to tell him about that. Even to myself, I still used euphemisms. Words that I rarely let myself think, I would now have to speak out loud.

I could wait, I argued with myself, wanting a way out. No, you really can’t. This is going to affect a lot, I reminded myself. He’s going to have to know.

And disclosing wouldn’t just be for his sake; it would be for me, too. If Jacob didn’t understand, he might add to the lies about it being my fault that I heard in my head every day, and that would be crushing. I could barely fight the war within myself. I had no ability, nor any desire, to start a relationship where I’d have to fight those ideas with the person I let closest to me. You have to know if he can handle it, I told myself firmly. If he can’t, there’s no point in going any further. There wasn’t a choice.

How do I even start that conversation? I wondered, feeling ill.

In the two years prior, I’d journaled extensively at my mother’s suggestion, despite my inner protestations. I wrote mostly in pencil, which gave me the freedom to erase and hide whatever I put down. Preparing for this conversation with Jacob, I sat down in my room and flipped through my old entries. Memories flooded me as I wrestled with how and what to communicate.

Two years earlier, I had stumbled across a news special on childhood sexual assault. It put words to what I had never understood — why I hadn’t been able to move or speak during the abuse. There weren’t just two responses to danger — fight or flight — as everyone casually said. There were three: fight, flight or freeze. When I heard that, I recognized my own experience. I know what freezing in fear is. It’s when you’re so confused and ashamed and horrified and scared that you just shut down, because reality is incomprehensible.

How could I even begin to let someone get close after that? I’d journaled through the trust paradox, too, the one that twists the truth and makes a victim feel like she’s at fault: Because I trusted, I gave the benefit of the doubt. If I hadn’t trusted Nassar enough to let him get close, if I hadn’t trusted enough to believe he wouldn’t hurt me, it never would have happened. If he hadn’t known I trusted, he never would have done it. It’s my fault. I gave him the power to damage me when I gave him my trust.

For years, I had promised myself that no one would ever know what happened to me, ignoring the reality that someday, someone might have to. How much room could I leave for Jacob if he didn’t understand but was willing to learn? I was steeling myself to be devastated by his reaction, even if he had good intentions.

As I stacked the loose collection of journal entries to put them back in their folder, another old entry slipped out. I’d titled it “Silent Battle.” It was page after page of my attempt to find words that could explain the internal war that rages within a victim when her abuser’s actions don’t match the person he was supposed to be to her. It was also my attempt to answer the resounding question I heard so often: Why didn’t you tell someone? Re-reading my writing, I felt exhausted. I feared this painful line of questioning would be the conversation that was coming, because it was the one I couldn’t get out of my own head.

Why? Because I trusted. I was a child. He was a doctor. He knows best. He had cared for me. He knew me. There had to be a reason. I must be reading too much into it. It isn’t fair to assume he was being sexual. Think about who he is. Give the benefit of the doubt. I must be the one with the dirty mind if I can even think something like that.

How could you not cry out?

Foolish. How could you not know?

But it’s not done.

You didn’t cry out.

I inhaled sharply, closed the folder with a snap and quickly shut the light off. There was no point in thinking about how Jacob might answer that unspoken question. I couldn’t change it. All I could do was live with the fallout.

That was a decade ago. What I didn’t know then was that the man walking into my life would become my greatest earthly source of healing, hope and comfort.

So when I told Jacob what happened to me, he immediately understood why the damage was significant and real. It had to be — sexual assault is an attack on a person’s sense of self. He knew that my vulnerability needed to be protected and respected. I never had to question whether he thought my abuse was my fault; he came right out with that assurance unprompted, and he reminded me over and over again. He was able to do all the right things for me because he thought all the right things; he saw the situation for what it was.

Jacob showed me how a partner could gently and patiently walk beside me through my healing without ever making demands, without placing blame on me when I struggled, without impatience. His values and priorities stood against a culture that asked, “What’s the big deal?” He took on my pain as his own, showed me that he could stand in grief with me, that we could be a team, even as I took the lead. And because of this, one of my greatest fears — telling a future partner about my abuse — became instead a source of incredible healing.

Adapted from What Is a Girl Worth: My Story of Breaking the Silence and Exposing the Truth about Larry Nassar and USA Gymnastics by Rachael Denhollander, releasing from Tyndale House Publishers Sept. 10, 2019. 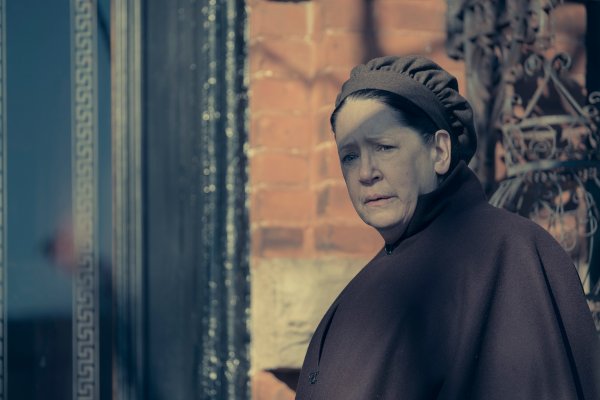 Ann Dowd Won an Emmy for Her Work on The Handmaid's Tale. Here's What TV's Aunt Lydia Had to Say About The Testaments
Next Up: Editor's Pick