'I Stand With Them.' Simone Biles Wears Teal Leotard in Solidarity With Gymnasts Abused by Larry Nassar

Raising awareness for sexual assault, Biles wore a teal-colored leotard as she went on to become the second woman to win five or more national all-around titles at the U.S.A. Gymnastics National Championships. She purposefully chose the color teal, which is used to raise awareness about sexual abuse, at a time when USA Gymnastics is struggling to respond to the years of abuse hundreds of young athletes experienced at the hands of disgraced former national team doctor Larry Nassar.

The teal-colored leotard “is for the survivors,” Biles, who is a survivor herself, said, according to the Associated Press. “I stand with all of them and think it’s kind of special to unite (people).”

Biles and hundreds of other survivors have come forward with stories about Nassar’s sexual abuse in recent months, exposing one of the largest sexual abuse scandals in sports history. Many of these survivors, including fellow Olympians Aly Raisman, Jordyn Wieber, Gabby Douglas and McKayla Maroney, detailed horrific stories of Nassar’s sexual abuse while he was supposed to be treating them for injuries as the national team doctor with USA Gymnastics and in other roles at Michigan State University. In January, Nassar was sentenced to up to 175 years in prison.

Survivors have criticized USA Gymnastics and Michigan State for how it handled the monumental scandal, and have accused the organizations for not acting faster in response to abuse allegations. Biles said USA Gymnastics should carry the “guilt” for the years of abuse when she came forward with her story in January.

“For too long I’ve asked myself, ‘Was I too naive? Was it my fault?’ I now know the answer to those questions,” Biles said in a January statement about the sexual abuse she endured. “No. No, it was not my fault. No, I will not and should not carry the guilt that belongs to Larry Nassar, USAG, and others.”

Biles’s nod to these survivors came and historic performance over the weekend — in which she stood at the top of the podium for each event — came after USA Gymnastics President Kerry Perry made her first lengthy comments on the Nassar scandal in months. Her question-and-answer session with the media was criticized by reporters for its lack of specifics as the organization works to address the issue. “I want her and all of our athletes to know we have their best interests at heart,” Perry said of Biles during the press conference, according to USA TODAY.

Despite the ongoing controversy, Biles made a triumphant return to the top after she took a post-Olympics break and did not compete in 2017. Her 2018 title adds to her consecutive victories in 2013 through 2016.

Biles displayed her dominance with wins in every event, making her the first athlete to pull that off since 1994, according to Sports Illustrated. And, as the athlete tweeted after her victory Sunday night, she has “been back for only 9 months.”

The original version of this story misstated whether Simone Biles was the first woman to win five national titles. She was not; Clara Schroth Lomady won six between 1945 and 1952. 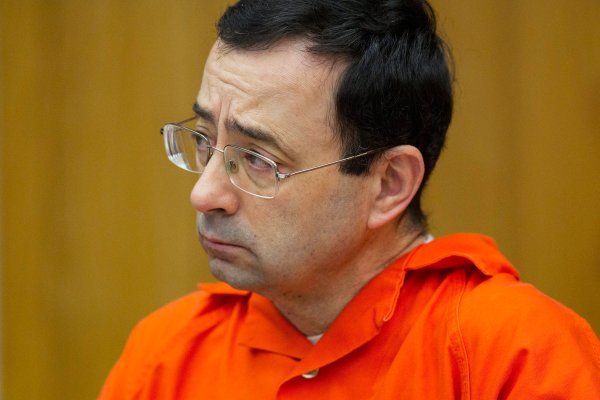 Olympic Gymnasts Kyla Ross and Madison Kocian Say They Were Sexually Abused by Larry Nassar
Next Up: Editor's Pick