Serena Williams in the first round of the 2019 U.S. Open in Arthur Ashe Stadium at the USTA Billie Jean King National Tennis Center on Aug. 26, 2019, in New York City.
TPN—Getty Images
By Anna Purna Kambhampaty

Every Grand Slam season, tennis players’ sartorial choices regularly make headlines. During this year’s U.S. Open, Serena Williams’ short black bodysuit has taken the stage, widely admired by her fans as a daring choice after the backlash she received from French tennis officials on her full-body black catsuit at last year’s French Open. Tennis style has a place off the court too, having seeped its way into mainstream style stalwarts like the Stan Smith tennis sneaker by Adidas and more exclusive, trend-setting fashion like Gucci’s tennis-heavy Pre-Fall 2019 collection.

From the sport’s earliest days to its top moments of controversy, tennis has long been influenced by fashion — and has influenced it in turn, as Serena Williams’ stylist Kesha McLeod points out.

“What we see Serena wearing today is what we want to wear in everyday life. The power of her style goes far beyond the court,” McLeod tells TIME.

The racket sport’s connection to fashion is deeply rooted. Lawn tennis, created in part as a response to women’s enthusiasm for croquet, was in the 1870s a new, more active sport that welcomed women, unlike the popular male-only version of the time, called court tennis. Since men and women could play lawn tennis alongside one another, the sport was at times viewed as a way to meet romantic partners. “Flirting was common. It was one of the few pastimes that brought both sexes together,” explains Kevin Jones, curator at the Fashion Institute of Design & Merchandising Museum in Los Angeles.

Along with the upper-middle-class and upper-class society nature of the sport in its early days, the potential for a meet-cute established an early precedent of taking appearance and style into consideration while playing tennis, to the detriment of practicality or comfort. Men wore blazers and flannel trousers, while women wore corsets and long kilt skirts.

As the sport evolved, a more uniform but still formal style of dress started to form for women. The tennis look drew from lawn dresses, which were often worn to garden parties, racecourses and other outdoor leisure events. These all-white, cotton and linen garments featured lace inserts and elaborate embroidery patterns. They eventually transitioned from being worn by spectators to being worn by players on the court. The prominence of these dresses shows that the focus of tennis attire was still on fashion, not performance, Jones says.

One of the earliest moments that this form-over-function mindset was challenged was at the 1887 Wimbledon’s Ladies Singles Championship. Tennis star Charlotte Dod, known as Lottie, was only 15 the first time she won a Wimbledon title; because of her youth, she was able to wear clothing that was not as restricting. Ditching the tight corset, full-length dress and multi-layered gown, she wore calf-length garb more similar to a school uniform than a tennis uniform at the time. Many older opponents argued that her attire gave her an unfair advantage by allowing her to move in ways and at speeds that the traditional tennis gear could not, bringing to the sport, for one of the first times, the question of designing garments for mobility and agility.

This concept was furthered by the iconoclastic Suzanne Lenglen, who was the center of another Wimbledon fashion scandal in 1919 when she wore a calf-length skirt, short sleeves and a floppy hat. Despite the backlash from the press, which called her indecent, Lenglen went on to win the tournament. She often wore a tulle wrap around her head while playing, called the “Lenglen bandeau,” which caught on to become a defining look of the Roaring Twenties.

But it wasn’t just what she was wearing or her winning streak that made Lenglen such an influential figure. Jones considers her one of the first athletes to become a celebrity outside of the world of sports. This is because “she didn’t just play. She performed. She came up with the most unique moves. She would jump all over the court, never trying to be prim and proper. She would do anything it took to get the ball over the net—contorting her body, sprinting across the court, and diving for the ball,” he says. This gained her the adoration of many fans in and outside of tennis. Lenglen set an early model for female athletes to become star personalities through style and individuality.

Meanwhile, throughout the late ’20s and ’30s, men’s tennis fashion was starting to change as well.

René Lacoste, a star tennis player at the time, designed and sported a new polo shirt that featured short sleeves, an unstarched collar and a long tail, straying from the long-sleeved, button-up polos of the time. The unstarched collar could be popped up, protecting players’ necks from the sun, and the long tail meant the shirt could be tucked in more easily. Nicknamed “The Alligator” because of his affinity for a crocodile-leather suitcase, Lacoste embellished his polos with the crocodile logo, helping pioneer the idea of branded clothing. Later, in the ’50s, Fred Perry furthered Lacoste’s invention by adding a stitched logo rather than one that was ironed on.

When the look was picked up by the mods — a fashion, music and party-focused subculture mostly made up of working-class youths in London — the polo shirt became a staple for the generation and a symbol of late ’50s modernism.

By this point in time, while tennis clubs and tournaments widely welcomed women, they tried to remain exclusive in other ways. Exclusivity was always a running theme in the history of tennis; in her book When the Girls Came Out to Play: The Birth of American Sportswear, Patricia Campbell points out an 1881 excerpt from Outing magazine that assured women who played tennis that they would be “in the company of persons in whose society [they are] accustomed to move,” never attracting the attention of the lower classes.

The rule that tennis players must wear all white, which started during the Victorian era with influence from cricket attire and lawn dresses and a desire to keep players cool to minimize improper sweat stains, became another way to keep the sport an upper-middle-class and upper-class activity.

“The white symbolizes purity and virtue, reflecting the self-perceptions of the class from which tennis derived most of its players,” explains Robert J. Lake, author of A Social History of Tennis in Britain and Routledge Handbook of Tennis: History, Culture and Politics. The rule played a part in keeping people who might not have had the same look or values out of tennis clubs.

In the later half of the 20th century, all of the Grand Slam tournaments except for Wimbledon moved away from their all-white rules mainly for commercial purposes, according to Lake. “With the advent of color television, it was considered a novel idea for players to wear color. It attracted more viewers to the sport.”

Then came Ted Tinling, a Wimbledon host, tennis player and fashion designer, who had been banned from the tournament for dressing player Gussie Moran in a pair of ruffled undershorts visible below a short dress in 1949.

In the ’70s, Lake says, women realized that in order to compete with men in terms of prize money, they had to do more than just play well; they had to look the part as well. Tinling wanted to contribute his talents as a designer. He worked with Billie Jean King during the 1973 Battle of the Sexes match and with the rest of the Original Nine, the group of rebellious female professional tennis players who fought for equal rights in the sport. Tinling worked to make them look more glamorous, in order to bring more viewers to the women’s tennis circuit. However, Lake notes, this tactic also encouraged fans to think of female tennis players as objects of sexual desire. As they continue to compete with men for TV coverage and endorsements, “the highly gendered culture of the sport has pushed many female players to dress in more provocative ways, or at least in ways that are ostensibly feminine,” Lake says.

Though men are called out for sartorial missteps as well — like Roger Federer being told to change out of his orange-soled Nike shoes in 2013’s Wimbledon tournament — Meredith Richards, a librarian at the International Tennis Hall of Fame Museum, argues that women are still the main target of this type of scrutiny. Richards points to an umpire at last year’s U.S. Open issuing Alizé Cornet a fine for switching her top to the right way around after she realized it was worn backwards, even though she was wearing a sports bra underneath. “Think of how often men change shirts on court and no one seems to take note,” says Richards. (Male tennis players are allowed to take off their shirts on court, but female players are not, according to certain interpretations of the rules.)

So what does tennis style mean today?

Williams’ style tells us an entire story apart from her game, the stylist adds: “Serena is who she is. She’s taken charge of this through her wardrobe. It’s all about letting other people know that you can wear a tutu that’s cute and dainty but still be taken seriously and as the powerful person you really are.”

And though tennis style has been widely used to reinforce gender boundaries, McLeod argues that Williams blurs these boundaries, pointing to this year’s short black bodysuit and her choices to wear what she wants.

Serena Williams wearing a tennis outfit designed by Virgil Abloh and designed in conjunction with Nike, in the second round of the U.S. Open at the USTA Billie Jean King National Tennis Centre on Aug. 28, 2018 in New York City.
TPN—Getty Images

Meanwhile, Williams has also stepped into the streetwear world by wearing Nike x Off-White on the court and by collaborating with the brand’s founder Virgil Abloh on the “Queen” Collection.

And this latest development is fitting, notes Kevin Jones: As long as tennis has existed, the sport’s leading female figures have been the quintessential modern women of their times. “Whatever they are wearing,” he says, “is the most modern, most efficient and most fashionable style at the time.” 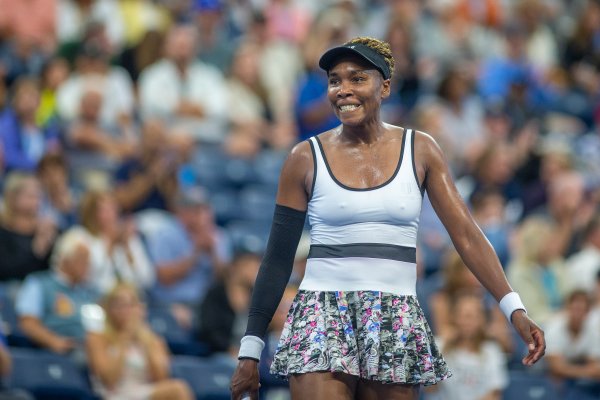 Confused U.S. Open Ball Boy Awkwardly Tried to Deliver Venus Williams Coffee and We've Been All There
Next Up: Editor's Pick