Why Wimbledon Players Have to Wear All White

No tennis whites, no service. At least, that’s the Wimbledon 2019 rule.

Another year, another Wimbledon tennis tournament — and another chance for tennis players to tempt the fate of grass stains with their all-white outfits. Or, for the bold, attempt to skirt the strict dress code regulations. When Roger Federer, Serena Williams, Rafel Nadal, teen wunderkind Cori Gauff and other tennis stars come to the court from July 1 to July 14 this year at London’s All England Lawn Tennis and Racquet Club, they’ll be decked out in their finest athletic gear, minus all the color. At tennis’s oldest and most prestigious event, one of the four Grand Slam tournaments, the fashion police are always out in full force. (As are the starry spectators: even the Duchess of Cambridge, Kate Middleton, has dropped by to watch so far.) But as International Tennis Hall of Fame librarian Meredith Richards told TIME, players have have tested the limits of the sport’s dress code for decades.

What is the dress code?

The official dress code for the Wimbledon 2019 tournament harkens back to standards set in the Victorian era, when players wore white for propriety’s sake as it was believed that white showed less sweat. In the ensuing centuries, however, the rules of the Wimbledon dress code have gotten tighter to squeeze out all those pesky players who might try to challenge the tradition of the look.

The first rule for Wimbledon tennis players is that the outfit be “suitable tennis attire that is almost entirely white,” which applies when they enter the court area. And shades of off white and cream won’t cut it. And while non-white trim is allowed, that pop of color has to be on the neckline, sleeve cuff or outside seam of a pant, skirt, or shorts leg — and can only be under a centimeter wide. Logos are out, as are colors contained in patterns if they measure over a centimeter as a mass.

And then there are the accessories, which include “caps, headbands, bandanas, wristbands and socks” — all required to adhere to the same all-white rule, with the one-centimeter trim allowed. Shoes have to be completely white, without colored soles, and undergarments that can be “visible during play” have to match with the white theme, too. (“In addition,” the code helpfully adds, “common standards of decency are required at all times.” They do not elaborate further on those standards.)

Finally, players often use supports or medical tape, which Wimbledon requests be “white if possible” but may be a color “if absolutely necessary.”

Have there been players who have broken the dress code rules?

Over the years, many players have pushed the boundaries of the Wimbledon dress code, causing the club to respond with ever-stricter regulations. From 1988 to 1990, star player Andre Agassi refused to even participate in Wimbledon, as he favored brightly colored apparel; he eventually succumbed to the tennis whites rule, though, and in 1992 took home his first Grand Slam title after ending his boycott against the uniform.

In 2013, Wimbledon regular Roger Federer himself was chastised by the club after wearing a pair of shoes with orange bottoms. (For the next year, they clarified the rule about the soles of shoes.) “White, white, full-on white,” he said in 2014 in response to rules updates. “I think it’s very strict. My personal opinion: I think it’s too strict.”

Roger Federer of Switzerland during his first round match against Victor Hanescu of Romania of on Day One of the 2013 Wimbledon Tennis Championships at the All England Lawn Tennis and Croquet Club in London, United Kingdom.
Visionhaus—Corbis via Getty Images

Others have skirted regulations by dying their hair bright colors and flirting with different forms of undergarments, accessories or trim. Back in 1949, women’s player Gussie Moran raised eyebrows with lace-trimmed bloomers worn beneath her skirt. While the bloomers were all white, the All England Tennis Club was not pleased with her choice and accused her of “bringing vulgarity and sin into tennis,” as her New York Times obituary notes. They also soon after banned short dresses from the tournament.

But for Moran, the point was just better mobility. “I am interested in clothes I can play tennis in, not in creating a sensation and certainly not in anything anyone at all would consider in poor taste,” she wrote in an article for the Associated Press.

Although short dresses were eventually allowed back in, undergarments remain a sticking point. More recently, in 2010 and 2012, Serena Williams pushed boundaries with brightly colored undershorts. Apparently they functioned as a good-luck charm, however; she claimed the competition’s trophy both years. Williams loves a tennis fashion statement: at 2018’s French Open she donned a sleek black catsuit, and she also sported a tutu at the 2018 U.S. Open.

And her sister Venus Williams also made headlines for her brushes with the dress code, as recently as 2017’s Wimbledon events. When asked about her choice to wear a pink sports bra for the first half of one of her matches, she quickly shut down the conversation. “I don’t like talking about bras in press conferences,” she responded. “It’s weird.”

Why so strict about wearing all white?

The history of tennis whites goes back to the early days of the sport in the 1870s. During the Victorian era, it was all about being “incredibly proper,” according to Meredith Richards, the librarian at the International Tennis Hall of Fame. “It was actually considered improper to sweat.” Technically, white clothing was supposed to be both a little more breathable and less hot than other colors; presumably, players would sweat less in their whites — and their perspiration would be not be quite so obvious, thanks to the light color.

But, as Richards notes, that wasn’t always the case. The styles didn’t help, either: women wore full-length dresses down to their ankles with sleeves, while men competed in long pants, mostly all made of cotton. Then again, the level of play was also different. “Of course, they weren’t exerting themselves very much, not nearly as much as they are today,” Richards concedes.

Today, many tennis clubs — including Wimbledon — have all-white-clothing policies in place, mostly for tradition’s sake. And because Wimbledon is the most traditional of the four majors, the policy is particularly serious.

Still, players have always pushed the boundaries. Hall of Famer Rosie Casals, for instance, was reprimanded by Wimbledon while playing in 1972 for a dress that featured too much purple; it was peppered with the logo of the Virginia Slims cigarette brand, Richards explains of the infraction.

Even while tennis whites remained par for the course, however, some in the sport advocated for a greater use of color.

“Once color TV came around, Hall of Famer Mike Davies brought about the idea of players wearing colored clothing,” Richards recalls. “He said that if people wore different outfits, people would be able to tell them apart more easily.” No longer relegated to black and white viewing, color on the court was both a mark of personality and a way for fans to identify the competitors. The rest, as they say, is history — until players convene back at Wimbledon, of course.

Just how far will officials go to enforce this Wimbledon dress code?

The Wimbledon officials are serious about their tennis whites rule. In 2014, tennis great Martina Navratilova — who tied Billie Jean King for most Wimbledon titles of all time — was reprimanded for blue stripes on her white skirt, inducing her to later comment that the powers that be had “gone too far.”

Recently, underwear has been the sticking point for players, and Wimbledon has gone so far as to replace the offending items for players. In 2017, Austrian competitor Jurij Rodionov was asked to change after it was discovered that he was rocking blue undergarments; he was able to swap them out for a white pair provided by Wimbledon, and went on to win his match. Similar situations arose that same year for doubles players Zsombor Piros and Wu Yibing. “I didn’t realize it was such big news,” Piros said at the ensuing news conference.

Wimbledon 2019 takes place from July 1 to July 14, and games are available to watch via ESPN and with some footage on Wimbledon.com, plus on the BBC Sport website and app. 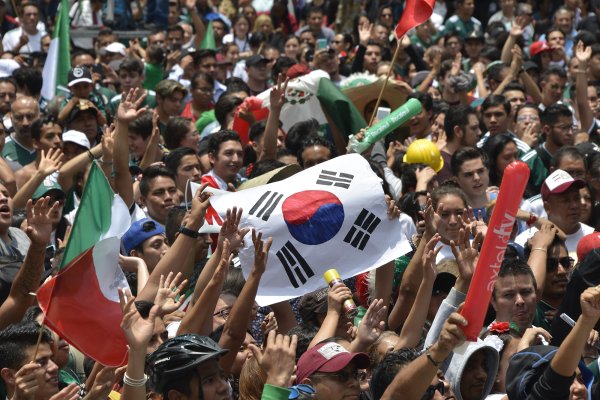 All It Took Was Beating Germany to Unite Mexico and South Korea World Cup Fans
Next Up: Editor's Pick