How Billie Jean King Won the Battle of the Sexes, as Told in 1973

The tennis match the world was watching this week in 1973 was a long time coming (and is now the subject of a movie with Emma Stone and Steve Carell, out Friday), but it was over relatively quickly.

The so-called “battle of the sexes” of Sept. 20, 1973, which pitted Bobby Riggs against Billie Jean King, was over in three straight sets and just a little more than two hours. The sex part was, unsurprisingly, the focus of the attention: The pre-show entertainment for the 48 million television viewers included a rousing rendition of the song “Anything You Can Do, I Can Do Better,” and the competitors entered in fitting style, with King carried on a divan by a team of shirtless men and Riggs drawn by a group of the women he called his “bosom buddies.”

But the game was, TIME noted in the following week’s issue, much more of a mismatch in terms of age and athletic ability. Riggs was 55 and King, at the prime of her career, was 29. And the result of that difference was quickly clear, as the magazine noted:

In the wake of the match, which all admitted in hindsight should not have really seemed suspenseful, Riggs himself admitted that he had been overconfident about facing a woman and had not prepared for the match. He had spent so much time promoting the idea of the battle of the sexes that he hadn’t really trained for the big day. Posing for a post-match photo, however, he kept up the hustle, asking for a rematch and for a kiss from Billie Jean King for the cameras. But, despite his showman’s patter, she had shown him — or, as one TIME reader put it in a letter to the editor, she had turned a male chauvinist pig into a meek “male chauvinist rabbit.” 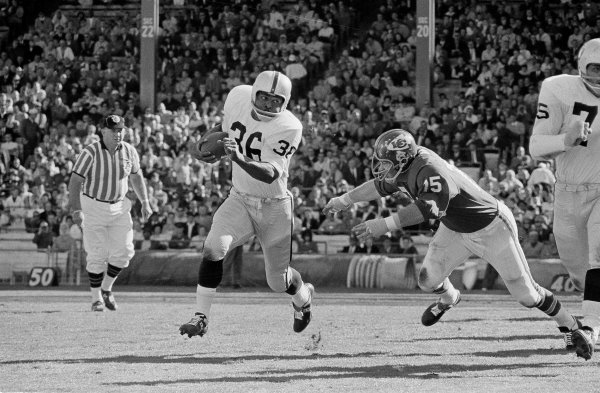 This Football Player Fought for Civil Rights in the '60s. Here's What He Thinks About National Anthem Protests
Next Up: Editor's Pick