World War II Launched a New Age of Global Power. 80 Years After the War Began, That Era Is Ending

On Sept. 3, 1939, a newspaper seller carries a board pronouncing the declaration of war between Britain and Germany, on the Strand, heading towards Admiralty Arch in London.
Central Press/Getty Images
By David Kaiser

On the first day of September of 1939, German troops crossed the border into Poland, and two decades of European peace came to an end. Two days later, on Sept. 3, Great Britain and France declared war on Germany. Within two more years, the war unleashed by Adolf Hitler became a global struggle to determine who would govern the world for decades to come.

It was also a struggle to determine how the world would be governed: the Second World War was an ideological battle in which different visions of the future were competing, and after which the winners—notably the United States and the Soviet Union—imposed their institutions and ideas on the territory they were fighting over.

Now, 80 years later, nearly everyone old enough to remember that time as an adult has passed from the scene, and the world that war created is rapidly disappearing before our eyes.

Twenty-one years before World War II began, in November of 1918, imperial Germany had lost the First World War. The victorious powers—most importantly Britain and France—had, however, failed to create a stable new order in the 1920s and early 1930s, and the Depression helped bring Nazi dictator Adolf Hitler to power. Hitler was determined to remake the map of Europe and the world, even at the cost of another big war.

Believing that the future of the world belonged to super-states on the scale of the British Empire, the new Soviet Union and the United States, he wanted to conquer his own huge empire in Eastern Europe and expand German influence around the globe. He also planned an attempt to subjugate, drive out or murder races he deemed inferior, such as Poles and Jews, to proclaim the superiority of what he called the Aryan race, and to make totalitarian dictatorship, not western democracy, the prevailing form of government in the developed world. Japan was working on a similar idea in the Far East, where it was already in the third year of a war to subjugate China. Its government—dominated by its Army and Navy—wanted to expel western colonial powers from the region and create a new empire in Southeast Asia, which Japan would rule as the leading nation.

Hitler’s vision of the future, thankfully, did not prevail—but his belief that a few superpowers would rule turned out to be correct.

In Washington, Franklin Roosevelt in early 1941—almost a year before the U.S. entered the war in the aftermath of Pearl Harbor—defined World War II as a struggle between democracy and dictatorship, and even declared, in his State of the Union address, that the future of democracy in general and the United States in particular depended on the defeat of Germany and its allies. He called for a world based on the “four freedoms”: freedom of speech, freedom of religion, freedom from want and freedom from fear. In the struggle between two ways of life, he declared, there could be “no end save victory.”

The Soviet Union—ruled tyrannically by Joseph Stalin—had carried on a propaganda war with Nazi Germany for most of the 1930s, only to sign a non-aggression pact with Hitler in August 1939 and then participate in the war on Poland. Hitler’s actions, however, showed that he viewed the pact as merely tactical, and the conquest of the USSR remained his primary goal: Nazi Germany attacked the USSR on June 22, 1941, and the German Army made spectacular gains in its first few months, while SS units killed tens of thousands of Communists and Jews. But, four years later, the USSR was the one on top, as it joined the United States—and to a lesser extent the British—in destroying the armies, the navies and most of the major urban areas of both Germany and Japan. And when the military forces of the U.S. and the USSR won, so did their worldviews.

Roosevelt’s vision of a global battle between two opposites continued to hold true as the two superpowers promoted or imposed their economic systems throughout the territories they had liberated from the Axis, and faced off in the new Cold War. Their systems became competing models of development in the developing world, where the older colonial powers now had to give up their empires. The U.S., the leader of the free world, created a new order of free markets, freer international trade and currency movements, and committed at least in theory to democratic states within its sphere of influence—and remained committed to that new order as long as its leaders were still old enough to remember Pearl Harbor and V-J Day. The Soviet Union quickly abandoned the wartime alliance with Britain and the U.S., which it now defined as capitalist enemies. Committed at least in theory to world revolution, it imposed Communist regimes in Eastern Europe, encouraged North Korea to try to conquer South Korea in 1950, and helped Communists achieve victories in China and Vietnam.

In the long run, however, its economic system could not compete. When Soviet Communism collapsed in 1989, the fall of the Berlin Wall represented the fall of one of the worldviews that came out of the Second World War. For a time, it seemed that this meant the kind of democracy espoused by FDR and his successors had, after a half-century of fighting, finally won.

But the three Presidents who were born in the immediate wake of the Second World War—Bill Clinton, George W. Bush and Donald Trump—abandoned the political and economic world order their parents’ generation created, acting almost unilaterally in Kosovo, Iraq and with respect to trade, and abandoning arms-control agreements under Bush and Trump. The American perspective that evolved out of the war would not endure either. Eight decades after World War II began, the world it created is fading into the past.

Our new world is more economically secure than the world of the 1930s, but its political leadership is weaker. In the U.S., most Americans disapprove of how Donald Trump is doing his job. In Russia, a May poll showed that public trust in Vladimir Putin was at its lowest point in over a decade. Global approval for both, as well as their Chinese counterpart Xi Jinping, hovers around one-third. Today’s leaders aren’t putting forth a vision of the future that inspires a substantial majority of their own people, much less the world at large.

The political power of states in the mid-20th century enabled them to do both great and terrible things. Now we must find out if our politics can function without it. 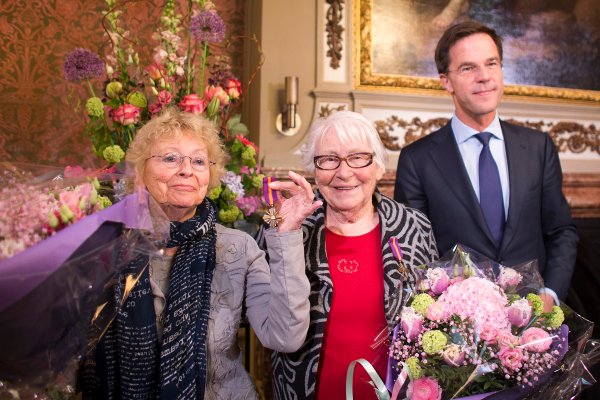 As Teenagers, These Sisters Resisted the Nazis. Here’s What They Taught Me About Doing the Right Thing
Next Up: Editor's Pick