An Armistice Ended Fighting in World War I a Century Ago. Real Peace Took Longer

The following is adapted from the LIFE special edition World War I: The Great War and the American Century

From where he stood at the moment the Armistice began, Harry Truman could see a German machine gunner. At 11 a.m., the man took off his helmet, bowed, and walked away. Truman wrote that “a great cheer arose all along the line.” When he tried to go to bed that night, “members of the French Battery insisted on marching around my cot and shaking hands. They’d shout ‘Vive le Capitaine Américain! Vive le Président Wilson!’”

Celebrations broke out in Paris, London, and New York, and in small towns across Europe and America. The people jubilantly danced and wept. The New York Times reported that in London, “everywhere the soldier reigned, and the American boys in khaki were having the time of their lives”…

But even as the armistice was celebrated, peace still had not been proclaimed. To Wilson, the war exposed the foolishness of military and peace alliances. He had already told Congress about his vision for the future, when in January of 1918 he had outlined his hopes for peace. His Fourteen Points plan called for free trade, freedom of the seas, and an end to secret treaties. Most important, the President proposed creating a League of Nations, which would guarantee “the political independence and territorial integrity [of] great and small states alike.”

And so, believing in the United States’ divine destiny, he sought to make his dream of a harmonious post-war age a reality. He sailed for Europe to attend the Paris Peace Conference. As his train neared Paris, citizens knelt by the tracks to pray. When he arrived in the capital, Parisians threw flowers in his path and cheered: “Vive Wilson! Vive Wilson!”

The peace conference began on January 18, 1919. A difference of opinion was quickly clear among the participants: Though the United States wanted to leave Germany in viable economic shape, many other nations set out to punish their former adversary. In the resulting Treaty of Versailles, the latter camp had their way. The terms of the peace eviscerated Germany, stripped it of territory, demilitarized the Rhineland, and limited its army to 100,000 soldiers. Since the victors believed that a settlement required monetary compensation, article 231’s “War Guilt” clause made Germany responsible for “all the loss and damage” of the war and demanded crushing reparations.

Despite resenting the War Guilt clause, the Germans had little choice but to sign the treaty on June 28. Exactly five years—five very long years—had passed since the assassination of Archduke Franz Ferdinand.

With the kaiser gone, the new Weimar Republic ruled Germany. Many former soldiers not able to return to their previous lives joined paramilitary societies, opposing the liberalism of the new government. At a meeting of the German Workers’ Party on September 12, 1919, someone handed a promilitary, anti-Semitic, nationalist pamphlet to a young Adolf Hitler, who was working in counterintelligence for the army. Hitler was attracted by what he read, and he soon joined the party, recalling that moment as the point from which “there was and could be no turning back.” The following February the group changed its name to the National Socialist (Nazi) German Workers’ Party.

Meanwhile, while the treaty no longer contained most of Wilson’s Fourteen Points, it did include his Covenant for the League of Nations. The revolutionary organization called on members to respect the territories of other nations and penalized those starting a war. When Wilson returned to Washington in July, he presented the treaty to the Senate for its approval and eventual U.S. ratification.

There was intense opposition to the agreement. The most fervent critic was Massachusetts senator Henry Cabot Lodge, who opposed its call for collective security, which he felt would infringe on American sovereignty. And while Lodge sought to modify the document, Wilson—who received the Nobel Peace Prize for his role in founding the League of Nations—fought all changes.

Hoping to raise bipartisan support, Wilson and his wife, Edith, headed off in the Mayflower, a presidential car set at the back of a Pennsylvania Railroad train. The nearly 10,000-mile journey barnstormed through such cities as Columbus, Ohio; Omaha; Spokane, Washington; and San Francisco. Along the way, hundreds of thousands flocked to see him, with Wilson telling a crowd of 20,000 in St. Louis, “I came back from Paris bringing one of the greatest documents of human history.” The train trip, however, proved exhausting for the President. He had had a series of minor strokes over the years, and during the 22 days stumping for his treaty he endured headaches so severe that they nearly blinded him. When he returned to the White House he suffered a massive stroke that paralyzed his left side.

Too weak to fight, Wilson still refused to compromise on treaty amendments. The Senate rejected the treaty on November 19. The following March, the chamber defeated a new version. It wasn’t until August of 1921 that the Treaty of Berlin officially ended the war between the United States and Germany. By then Warren G. Harding occupied the Oval Office, and the nation sought to put the war firmly in the past.

Read more in LIFE’s special edition, World War I: The Great War and the American Century, available on Amazon. 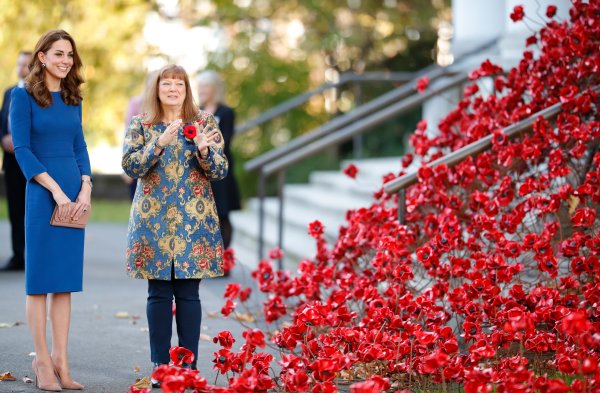 How Poppies Became a Symbol of Remembrance After World War I
Next Up: Editor's Pick