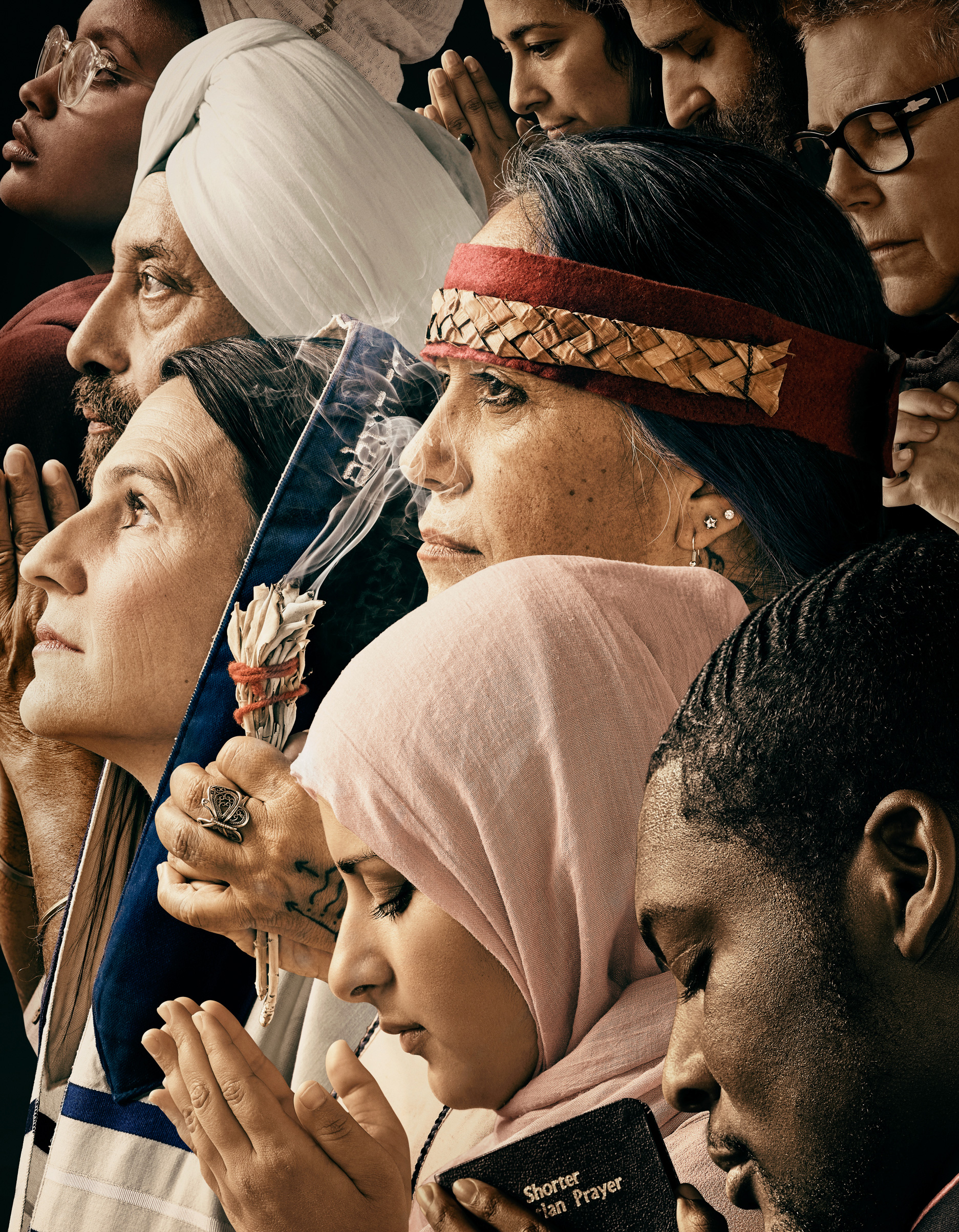 A reinterpretation of Norman Rockwell's iconic illustration “Freedom of Worship” Rockwell's classic illustrations of the "Four Freedoms," have been given a photographic update by artists Hank Willis Thomas and Emily Shur. The project is part of a campaign by the arts organization For Freedoms and just one of dozens of different versions of the image.
Hank Willis Thomas and Emily Shur—For Freedoms

Norman Rockwell's Vision of the Four Freedoms Left Some People Out. These Artists Are Trying to Fill Those Gaps

Updated — Nov. 15, 2018: The cover of TIME’s latest issue features a modern version of Freedom of Worship, the iconic 1943 Norman Rockwell painting. Here’s the story behind the picture.

It was no surprise that Norman Rockwell’s Four Freedoms paintings were a hit. Though the Office of War Information had turned down the set as not suitable for government use, Rockwell was already a nationally famous artist at the time and the Saturday Evening Post knew to plan a major publicity campaign around its 1943 release of the four now-famous images. The timing was right: As World War II raged on, an interpretation of the Four Freedoms, an idea introduced to the nation during President Franklin Roosevelt’s 1941 State of the Union address, felt particularly urgent. The Saturday Evening Post received 60,000 letters about the images, according to Deborah Solomon’s Rockwell biography American Mirror, and the exhibition of the originals was a massive hit. Even the government changed its mind, printing millions of poster versions.

Today, 75 years later, those four images — Freedom of Speech, Freedom of Worship, Freedom From Want, Freedom From Fear — remain some of history’s most iconic visual representations of the American idea. But they were always more aspiration than reality. As TIME observed shortly after the posters first made news, Rockwell’s work was “a loving image of what a great people likes to imagine itself to be.”

One gap between Rockwell’s images and reality was obvious to artist Hank Willis Thomas and photographer Emily Shur. Though the four original images contain a relatively large cast of characters — including specific representations of Protestantism, Catholicism and Judaism in the “Freedom of Worship” tableau — that group barely brushes against the depth of American diversity at the time, much less today.

“[Rockwell] was one of the people who really shaped the iconography of America and our visual culture,” Thomas tells TIME. “There are a lot of people who are missing in those images.”

So Thomas and Shur set out to address that problem, with a new project that attempts to capture the magic of these iconic images while filling in that particular blank. It’s an idea that’s been brewing for years: in 2016, Thomas and co-founder Eric Gottesman launched a non-partisan organization they called For Freedoms, with the idea of helping artists get involved in civic issues. Last year, Thomas recruited Shur, a friend, to help him finally bring its eponymous project to life — “to make a portrait of the America that we live in,” as Thomas puts it. (Photographer Wyatt Gallery also was also asked to help as a producer on the project.)

Over the course of two separate shoots, they invited friends, acquaintances and near-strangers to pose for photographic recreations of the original paintings. Though they were worried nobody would show up, they say something “clicked” once people realized the import of the project, and the word began to spread. All told, more than 100 participants came through the studio — including celebrities, such as the actor and activist Rosario Dawson, and people with personal connections to the freedoms, such as the Japanese-American filmmaker Robert A. Nakamura, who spent time as a child in an internment camp. Their varied cast included Native Americans, trans people, immigrants, activists and many others, as they strove to find representatives of as many meanings of “American” as possible.

So it was that, confronted with a problem that also faced Rockwell, they soon realized that they couldn’t contain America’s diversity in just four images—not even composites. (Rockwell also used that technique in his work.) As a result, they ended up with 82 final images.

Out of those, a select portfolio of Four Freedoms sets will form the backbone of a national billboard campaign that is part of For Freedoms’ 50 State Initiative, a national “creative collaboration,” launched in September, which aims to use public art, exhibitions and community meetings as platforms for civic life. (The Norman Rockwell Museum is also holding its own commemoration of the 75th anniversary of the images, including a separate set of “reimaginings” of the images by contemporary artists.)

“I hope that people feel that it’s an accurate representation of our everyday population now,” says Shur. “Even though I’m sure there’s someone we missed in there, I really feel 100% truthful when I say that we really have tried to get such a diverse group.”

Thomas also acknowledges that it’s not possible to include everyone in the American canvas, and that people who see only a few of the billboards may feel left out — but the expanding cast is part of what makes the idea appealing.

“If we want to hold onto this idea of a classic America, we also need to update it as our country changes,” Thomas says, “which means that 75 years from now our pictures will likely mean something different.”

Lily Rothman is the History and Archives Editor for TIME