Protesters stand off with police in a pall of tear gas during a demonstration on August 5, 2019 in Hong Kong
Anthony Kwan—Getty Images
By AMY GUNIA / HONG KONG

The head of Hong Kong Court Prosecutors Association has reportedly taken the extraordinary step of accusing the police of lying, potentially opening a unprecedented rift in the legal and security establishment as unrest in the territory enters its 14th week.

According to government broadcaster RTHK, the chairman of the association, William Wong, sent an email to all staff at the Department of Justice claiming that it was clear that police lied when they described the arrests of activists and lawmakers a day before a mass rally as a “coincidence.”

In his extraordinary communication, Wong said that “No court or reasonable jury properly directed would believe what police said” and, according to RTHK, added that police had also lied in “recent months.” He then called on the justice minister to ensure that the police maintained “honesty in doing their job.”

The apparent rift between prosecutors and police is a sign of the strain felt by the Hong Kong authorities as they try to contain what Beijing has called a “color revolution.”

Seven pro-democracy figures were arrested on August 30—including high-profile members of the Demosisto political party Joshua Wong and Agnes Chow, three legislators, and a former university student union president. The roundup was believed to be an attempt to discourage participation in an Aug. 31 march planned by the Civil Human Rights Front, a coalition of pro-democracy groups that has organized several mass rallies this summer.

Police continued the crackdown on Tuesday morning with several more arrests. Demosisto’s chairperson, Ivan Lam, who had been out of Hong Kong over the weekend, was detained on arrival at the city’s airport, according to the party.

Student leader Keith Fong was also arrested in the early hours of Tuesday, on theft charges that the Baptist University student union claimed were “fabricated” by police. Activist Michael Mo was also arrested on Tuesday morning, according to local media, and charged on suspicion of organizing an illegal assembly.

The round-up followed a day of student strikes and another night of unrest in the city, with protesters clashing with police outside the offices of Hong Kong’s embattled top official, Chief Executive Carrie Lam. Late on Monday night, Demosisto’s vice chairperson Isaac Cheng, was attacked by three men, according to a spokesperson for the party.

Protests have gripped Hong Kong since early June, sparked by the government’s proposal of a bill that would have allowed China to request fugitives be sent to the mainland to face trial in Communist Party controlled courts. Although the bill is now suspended, the movement has snowballed into a wider campaign for greater political freedom, with some protesters calling for self-determination or independence for Hong Kong. 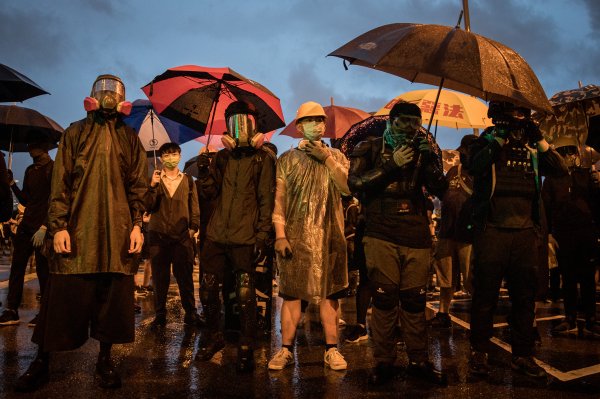