Taylor Swift Used Her 2019 VMAs Speech to Advocate for the Equality Act. Here's What the Bill Would Do

After opening the 2019 MTV Video Music Awards with a performance of her song “You Need to Calm Down,” Taylor Swift used her Video of the Year acceptance speech to call out the Trump administration for not responding to her Equality Act petition.

Swift launched the Change.org petition, which has been signed by over 500,000 people as of Tuesday afternoon, during LGBTQ Pride Month in June. In it, she advocates for the U.S. Senate to pass the Equality Act, legislation that prevents discrimination based on sexual orientation and gender identity. The bill was passed by the House in May and has moved to the Senate, but Republican Senate Majority Leader Mitch McConnell has yet to bring it to the floor for a vote.

The Equality Act would ban discrimination against LGBTQ people in the areas of employment, education, housing, public accommodations, jury service, federal funding and credit by incorporating these protections into the federal Civil Rights Act. It previously failed to get through the Republican-controlled Congress in 2015.

But, like many other supporters of the LGBTQ community, Swift is insisting that it’s time.

“In [the ‘You Need to Calm Down’] video, several points were made, so you voting for the video means that you want a world where we’re all treated equally under the law, regardless of who we love, regardless of how we identify,” Swift said of the fan-voted Video of the Year award.

The “Lover” artist went on to say that the petition has received more than enough signatures to compel the White House to respond. “At the end of this video there was a petition — and there still is a petition — for the Equality Act, which basically just says we all deserve equal rights under the law,” she said. “And I want to thank everyone who signed that petition because it now has half a million signatures, which is five times the amount that it would need to warrant a response from the White House.”

In the wake of Swift’s comments, White House deputy press secretary Judd Deere gave a statement on Tuesday in which he said that while the Trump administration takes issue with discrimination, it won’t support the Equality Act in its current form.

“The Trump administration absolutely opposes discrimination of any kind and supports the equal treatment of all; however, the House-passed bill in its current form is filled with poison pills that threaten to undermine parental and conscience rights,” Deere said when asked about Swift’s comments, according to CNN.

Swift previously criticized President Donald Trump for opposing the passage of the Equality Act in an open letter that she shared on her Instagram in June.

“I personally reject the President’s stance that his administration ‘supports equal treatment of all’ but that the Equality Act ‘in its current form is filled with poison pills that threaten to undermine parental and conscience rights,’” she wrote. “One cannot take the position that one supports a community while condemning it in the next breath as going against ‘conscience’ or ‘parental rights.’ That statement implies that there is something wrong with being anything other than heterosexual and cisgender, which is an incredibly harmful message to send to a nation full of healthy and loving families with same-sex, non binary or transgender parents, sons or daughters.” 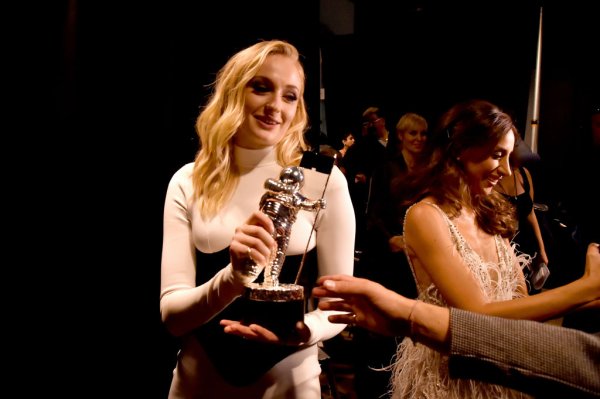 Let's Appreciate This Sophie Turner Reaction at the VMAs
Next Up: Editor's Pick