The biggest stars in the music industry gathered in Newark, New Jersey Monday night for the MTV Video Music Awards, because someone decided to make everyone from Taylor Swift to Shawn Mendes to Missy Elliott, Cardi B, Marc Jacobs and Queen Latifah navigate New Jersey Transit to the Prudential Center. This year’s celebration is hosted by Sebastian Maniscalco, a comic who is at least self-aware enough to know that everyone watching the MTV VMAs just Googled, “Who is Sebastian Maniscalco?” It gives the audience something to mull over while waiting for Taylor Swift to perform, watching artists collect Moon Men, Missy Elliott clinching the Video Vanguard Award, and all the incredible performances planned for the evening.

Here are the wildest, wackiest, and most wonderful moments from the 2019 MTV VMAs:

Taylor Swift opened the show with a technicolor performance of “You Need To Calm Down.” The stage was filled with dancers in sherbet-colored ensembles and glamorous drag queens. The song was cut short, though, so Swift could sing “Lover” for the first time, which her fans truly appreciated.

Maniscalco introduced himself to the audience by making fun of people raised on “participation trophies,” and “sensitive” people who may feel “triggered” telling them that there was a “safe place” backstage for anyone offended by his jokes. He then mocked influencers, and announced that “New Jersey has had one influencer in the last 40 years and that’s Bruce Springsteen.” The crowd cheered, because it’s The Boss, but still, it’s clear that this is not Maniscalco’s target audience.

We weren’t expecting French Montana to be the first person to get political on this show, and yet when he took the stage to announce the winner in the Latin category, that’s exactly what he did. “As an immigrant I feel like we are the people that make this country,” he said, pointing out that most of the nominees in the category “are immigrants.”

When Rosalía and J Balvin took the prize for “Con Altura”, J Balvin seized the opportunity to draw attention to the fire burning through the Amazon rainforest.

Lizzo took the stage underneath a full moon and by that I mean a giant, rotating, thong-wearing booty. She then proceeded to take Newark to church with her performance of “Truth Hurts” and “Good as Hell” and it may be the first time that the gospel was preached under a floating derriere.

Best Use of New Jersey

To prove their Jersey cred, the Jonas Brothers kicked off their performance at the legendary Stone Pony in Asbury Park, but the club where Bruce Springsteen got his start isn’t big enough for the former Disney stars. So they walked out, crossed the street, and went to a stage set up on the beach where a screaming hometown crowd waited to cheer them on.

Lil Nas X poked fun at the vast number of “Old Town Road” remixes by claiming he was going to make remix number 3,162 live on stage—but then performing another song entirely. His performance of “Panini” was a sign of what’s coming next.

Queer Eye’s stylist savant Jonathan Van Ness came onstage to introduce Video for Good and declared that “not caring is not cute!” The camera then cut to Taylor Swift, who has recently publicly regretted staying out of politics in the past. Turns out the cameraman should have yelled, “Spoiler alert!” because Swift won the prize for “You Need to Calm Down.”

While Taylor Swift won the prize for “You Need to Calm Down,” she did not take the mic. Instead, she let her friend and co-executive producer for the video Todrick Hall accept the award, cheering him on from the sidelines.

Most Over-the-Top Use of the Stage

It is only fitting that Missy Elliott, who is taking home the Video Vanguard Award, would have the wildest stage show of all. As she sang hits including “Werk It,” “Get Your Freak On” and “The Rain (Supa Dupa Fly),” in her outlandish outfits, the stage evolved from a hall of mirrors to a farm to a mountain range and more. It was an incredible show that was perfect for a video vanguard who made marks on music, fashion and generations of artists.

After Cardi B introduced the legend, Missy Elliott took the stage and the crowd would not let her talk. The entire Prudential Center filled with chants of “Missy! Missy!” She finally got a word in edgewise, thanking everyone who helped or inspired her along the way. It was an impressive list, that ranged from God to her mother to Timbaland, Hype Williams, Janet Jackson, Busta Rhymes, Madonna, Peter Gabriel, Kid Fury, and even Aaliyah. “Y’all are the icing on the cake. Y’all are the beat to the heart,” she said.

Shawn Mendes and Camila Cabello performed their hit single “Señorita” on a stage that was so covered with candles (or lights that looked like candles) that it was almost hotter than their fiery performance. Almost.

“I’ll just mispronounce sh– and f— it up,” said John Travolta, trying to get Queen Latifah to open the envelope and read the name of the winner of the Video of the Year award. After all, he famously renamed Idina Menzel at the Oscars calling her “Adele Dazeem” when calling her name at the award show.

Never doubt that Taylor Swift is the Queen of Shade. When she accepted the award for Video of the Year for the LGBTQ anthem, “You Need To Calm Down,” she took some time to shade the president. “By voting for this award you want a world where we’re all treated equally regardless of who you love and how you identify,” she said. She then pointed out that the petition shared at the end of the video has “five times the number [of signatures] it needs to warrant a response from the White House.” She then pretended to look at a watch that was not there, indicating that the White House had not and probably would not respond.

Best Way to Win a Breakup

Miley Cyrus took a break from her very public break up with Liam Hemsworth to perform her heartbreak anthem “Slide Away.” She looked and sounded good, which is exactly how anyone mid-break up wants to look.

Lil Nas X won his first award ever, taking home the prize for Song of the Year for “Old Town Road.” He came to the ceremony prepared to win, though, with a speech tucked into his pocket. He then pulled out a scroll and let it roll out across the stage. It was all a joke, though, ‘cause all he wanted to say was thank you.

The Jonas Brothers took home the award for Best Pop Video for “Sucker” and while that was a huge honor, it was who they received the award from that really got the Jonas Brothers excited — three cast members from The Sopranos. Having Drea De Matteo, Vincent Pastore, and Jamie-Lynn Sigler introduce them “was a Jersey dream come true.”

While Queen Bey wasn’t at the show, her heir apparent was. Normani, the former Fifth Harmony member, delivered a performance of “Motivation” that would make Beyoncé nod approvingly if she saw it, not that she’s ready to give up the crown any time soon.

Shawn Mendes and Camila Cabello took a break from public hand holding to accept the Best Collaboration award from three members of the World Cup winning U.S. Women’s Soccer Team. Alex Morgan, Ali Kreiger, and Ashlyn Harris, who know a thing or two about collaborating, stopped by to sip tea and talk up team play.

Neither Ariana Grande nor Billie Eilish could make it to New Jersey, even though they were nominated for two of the show’s biggest awards. Despite being absent from the festivities, Grande won Artist of the Year and Eilish took home Best New Artist. At least Eilish sent a video message to fans, apologizing for being on tour in Russia and not being able to make it to the show.

For their performance of “Que Pretendes,” it looked like Bad Bunny and J Balvin invaded Super Mario World by way of the Land of Ooo, floating above a stage filled with dancing stars, dinosaurs, and cacti. It was a trip through a cartoon wonderland, and they were clearly having fun.

Queen Latifah rode a motorcycle into the Prudential Center to rev up the show’s grand finale. The legendary rapper took the stage to spit out “U.N.I.T.Y.” with other New Jersey artists, including Wyclef Jean, Fetty Wap, Lords of the Underground, Redman and Naughty By Nature getting the audience to wave their arms, yelling, “Hip hop hooray!” Eagle-eyed fans may have spotted Ice T on the decks in the back reminding everyone that he has some serious musical chops that you just don’t see on Law & Order: SVU.

This story originally misstated the artist who drew attention to the fire in the Amazon during his acceptance speech. It was J Balvin, not Bad Bunny. 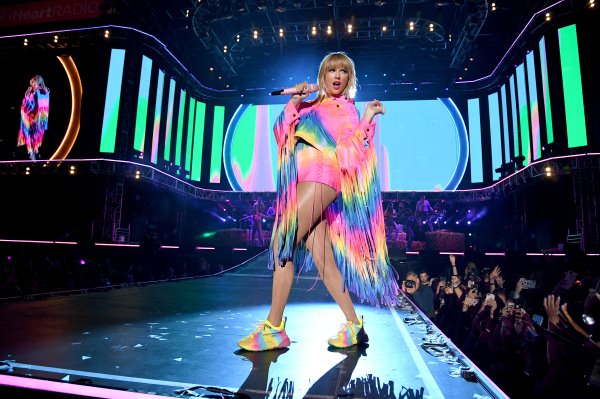 'I Just Wanna Do Everything I Can For 2020.' Criticizing Trump, Taylor Swift Says She Now Regrets Past Political Silence
Next Up: Editor's Pick