Brazil’s president Jair Bolsonaro, who initially was to reject $20 million in immediate aid funding pledged by world leaders at the G7 summit to fight fires in the Amazon rainforest, now says he’ll consider accepting aid if French President Emmanuel Macron apologizes, according to the Associated Press.

According to G1, a Brazilian news site, Bolsonaro and the Brazilian government announced Monday it would reject the pledge. In a series of tweets and media interviews, Bolsonaro and a Brazilian official accused French president Emmanuel Macron of colonialism and imperialism. Bolsonaro said that the G7 leaders were trying to save the Amazon “as if we were a colony or no man’s land.”

Though Bolsonaro’s chief of staff Onyx Lorenzoni told reporters Monday that Bolsonaro would reject the pledge, Bolsonaro said on Tuesday that Macron would have to apologize before he’d accept the aid.

When Lorenzoni said on Monday that Brazil would reject the pledge, according to G1, he added the money should be used to repair Europe instead.

“Brazil is a democratic, free nation, and has never had colonialist and imperialist practices as perhaps the objective of the French Macron,” Lorenzoni told G1.

Macron made subduing the Amazon fires, which have burned at a record rate in August according to Brazil’s National Space Research Institute, a leading agenda item during the G7 summit over the weekend in Biarritz, France. Tensions were already increasing between Macron and Bolsonaro before the summit, after Macron shared his thoughts on the Amazon fires on Twitter, which Bolsonaro took as criticism.

Macron and Chilean president Sebastián Piñera, announced the pledge on Monday — which also included an additional $12 million from Britain and $11 million from Canada, and a reforestation plan to be outlined in September — and minutes later Bolsonaro took to Twitter to criticize the G7 leaders.

Macron told reporters on Tuesday that Bolsonaro is misinterpreting the intention of the pledge.

“We respect your sovereignty. It’s your country,” Macron said. “The Amazon forest is a subject for the whole planet. We can help you reforest. We can find the means for your economic development that respects the natural balance. But we cannot allow you to destroy everything.”

Bolsonaro has faced international criticism for his response to the fires, and on Saturday he deployed fire fighters to begin subduing the flames, which environmental groups say were started by loggers and farmers. And some environmental groups like Greenpeace say the $20 million pledge is insufficient.

“The offer of $20 [million] is chump change, especially as the crisis in the Amazon is directly linked to overconsumption of meat and dairy in the UK and other G7 countries,” Richard George, the head of forests for Greenpeace UK, told The Guardian.

Bolsonaro has also faced criticism from indigenous groups who depend on the Amazon to maintain their way of life. Raoni Metuktire, a Brazilian indigenous chief, traveled to the G7 summit to discuss the Amazon with world leaders, and publicly criticized Bolsonaro.

“I am speaking now to all leaders, to all of you who are leaders in your countries, you have to set up ways to put pressure on the Brazilian government so it takes action to put a definitive end to forest fires,” Metuktire said in a video statement released Saturday. “I would like you to know that Bolsonaro says that I do no represent anyone, that I am not a chief. Bolsonaro comes from elsewhere, his ancestors are not from Brazil. As for me, I am from this land, and if I am a chief of my people, it’s because I wish that everyone can live in peace.” 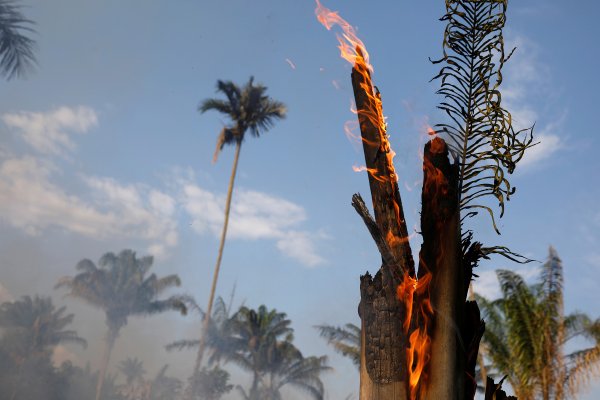 Brazil and Europe in Tension Over Amazon Deforestation
Next Up: Editor's Pick