While repeating much of her rhetoric from earlier press conferences, a defiant Lam said the semi-autonomous city can handle the spiraling unrest without Beijing’s forces intervening.

“The [Hong Kong] SAR government still has confidence that we can ourselves handle the conflict that has occurred in society in the past two months,” the embattled Chief Executive said in response to a question about the plausibility of the People’s Liberation Army descending on the city.

Her remarks come after Chinese state-run media stoked fears that Beijing’s forces could directly step in to quell the 12-week protest movement. A pointed commentary Sunday said the central government has the authority and responsibility to intervene if riots occur. Such a move would be unprecedented.

Lam admitted that the use of force was “intensifying” and that the protests are “reaching a state of lawlessness.” She criticized protesters for throwing petrol bombs at police and destroying neighborhood businesses, while firmly defending policing practices, which have elicited criticism from rights groups.

According to police, 21 officers were injured and 86 people, including a 12-year-old child, were arrested over the weekend. Marches held in at least three districts devolved into scenes of pitched battles by nightfall, with one officer firing a gun into the air as a warning shot.

The demonstrations, which began as a backlash to an unpopular extradition bill, have since morphed into a broader movement challenging China’s sovereignty and calling for full democracy. In recent weeks, demonstrators have shut down the city’s subway trains and the international airport.

When asked about why the government continues refusing to respond to the protesters’ demands, Lam made it clear that she has no intentions of capitulating, including to calls for her resignation.

As Lam digs in, the protestors’ resolve also shows no signs of abating. Pro-democracy coalition Civil Human Rights Front (CHRF) will hold a march to the Chinese government’s liaison office, Beijing’s organ in Hong Kong, on Saturday, and a class boycott will be held Monday to coincide with the first day of the academic year for high school and university students. 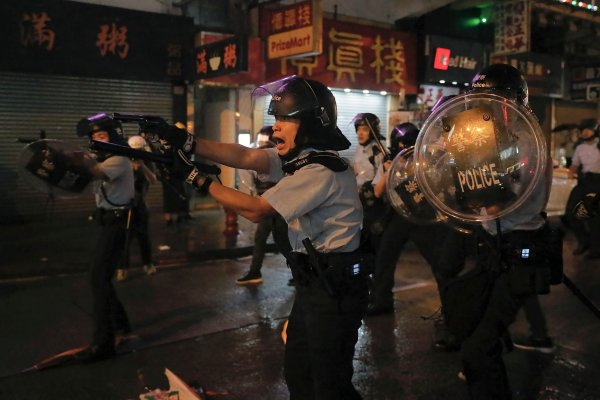