Protesters sit on a platform of a MTR underground train after some blocked the train doors at Fortress Hill station in Hong Kong on Aug. 5, 2019.
Anthony Wallace—AFP/Getty Images
By AMY GUNIA / HONG KONG

Although demonstrations have rocked the city for two months, Monday’s strike was one of the most disruptive to daily life to date. Businesses across the Asian financial hub shut as workers struggled to make it to the office.

“This is the first time that serious efforts to organize a strike have been taken in recent memory, so it’s a big deal,” Willy Lam, an adjunct professor at the Chinese University of Hong Kong’s Center for China Studies, tells TIME.

Hong Kong’s Mass Transit Railway (MTR) website showed seven lines out of service during the morning rush hour, including the Island Line, which cuts through the city’s government and financial districts.

Shops in several MTR stations had metal gates pulled down over them and remained closed during the morning commute. At several stations, protesters in black shirts and face masks blocked carriage doors to delay the trains from leaving. In one station, a man laid down across the carriage entrance to keep the doors from shutting.

A man (C) falls down during a protest to prevent commuters from reaching work in business districts at Lai King MTR station in Hong Kong on August 5, 2019.
Philip Fong—AFP/Getty Images

Traffic was blocked on several major thoroughfares. A South China Morning Post reporter posted a video on Twitter of protesters blocking the Cross-Harbor Tunnel, a key tunnel between Kowloon and Hong Kong Island.

The city’s Hang Seng Index was down almost 3% by the lunchtime trading break.

Major malls on Hong Kong Island opened for the day, but customer service representatives said that some stores would open late or not at all. In Pacific Place, a luxury mall adjacent to a protest hotspot, retailers Zara and the North Face were closed. One independent clothing boutique nearby was shuttered with a sign on the door reading, “Pray for Hong Kong! We are not working on 5/8!”

It’s a further blow to sectors like retail, which have already been hit by protests.

Not everyone was trying to get to work on Monday. Several professionals took the day to join the strike. One major law firm with offices in the city told employees they were welcome to hold their own views on the issue, but if they wanted to strike they would need to take a day of annual leave.

The city’s embattled leader, Carrie Lam, called a press conference Monday morning, after largely remaining out of public view for the past two weeks. She urged protesters to restore order in the city, and said the strike was causing anxiety for Hong Kongers. “Some of them do not know whether they could still take some forms of public transport while others are right now being blocked on the way to work.”

Even before Monday’s strikes, protests seemed to be taking a serious toll on business in Hong Kong. A recent survey on business sentiment by the American Chamber of Commerce in Hong Kong, a non-partisan business chamber that counts at least 600 companies as members, said that business were already facing serious consequences ranging “from an immediate hit to revenue caused by disruption to supply chains and consumption, to longer term doubts over cancelled events and shelved investments.”

Other experts agree. “Disruptions to economic activity from recurring protests in Hong Kong present a downside risk to our GDP growth forecasts,” Fitch Ratings said in a recent report.

Financial Secretary Paul Chan said on his blog yesterday that Hong Kong is at risk of facing a recession.

But Lam of Chinese University says today’s protests may only strengthen the government’s resolve not to give in to other protester demands, like an independent inquiry into police violence during the protests and the complete withdrawal of the bill.

“Today’s strike and other incidents will further convince Beijing that the Carrie Lam administration should not make any concessions because making concessions would be seen as succumbing to pressure,” he says.

— With reporting by Hillary Leung. 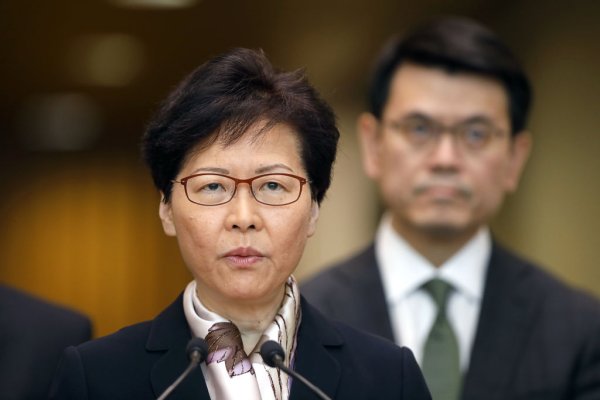 Hong Kong Leader Calls for Order Amid Citywide Strike
Next Up: Editor's Pick