'Each Country Can Have Their Own Villa.' Trump Suggests Hosting 2020 G-7 Summit at His Miami Golf Resort

(Bloomberg) — President Donald Trump said he doesn’t expect to make money if the U.S. hosts next year’s Group of Seven summit at his Trump Doral golf resort, even as he delivered an extended sales pitch to hold the meeting at his Miami property.

“Each country can have their own villa, or their own bungalow” if the meeting is at Doral, Trump said Monday at the end of the G-7 summit in Biarritz, France. The U.S. is next in the rotation to host the annual meeting of world leaders, which will occur in the middle of the 2020 presidential campaign. “I don’t want to make any money,” said Trump.

Earlier in the day, Trump ticked off advantages of holding a global summit in the Sunshine State of Florida. “It’s very big,” and it’s Miami, “so it’s a great area.” He told German Chancellor Angela Merkel, sitting next to him, that she’d have just a three-minute helicopter ride from the airport to the site.

The front entrance to the Trump National Doral is seen on June 1, 2016 in Doral, Florida.
Joe Raedle—Getty Images

The president already has run afoul of ethics experts and faced multiple lawsuits over his continued involvement with some of his private business holdings, such as the Trump International Hotel in Washington. Locating a global summit on one of his properties would open him up to a slew of new allegations that he’s mixing his private financial gain with his public position as commander-in-chief.

Still, Doral would benefit in other ways from hosting a summit of world leaders. The resort would get free publicity that could boost future profit.

The president placed his business holdings in a revocable trust that lets him continue to profit from his company’s activities. His sons Eric and Donald Jr. run the Trump Organization. Democrats and watchdog groups have repeatedly criticized Trump for maintaining his business while in public office.

Doral is built more for play than work, and its website boasts that it’s only eight miles (13 kilometers) from the Miami airport. It’s 800 acres, boasts four golf courses and 643 rooms, plus more than 100,000 square feet of event space — including the Donald J. Trump Grand Ballroom.

Doral may have fallen on hard times financially. Trump’s financial disclosure showed the property had $74.8 million in 2018 income, down from about $115.9 million.

A number of high-profile companies and industry groups have held meetings there since Trump took office, including private prison operator Geo Group Inc., a major beneficiary of Trump’s immigration policies. Separately, the Community Financial Services Association of America, a payday lenders’ trade group, held an event there in March amid efforts to roll back consumer protections in the industry. 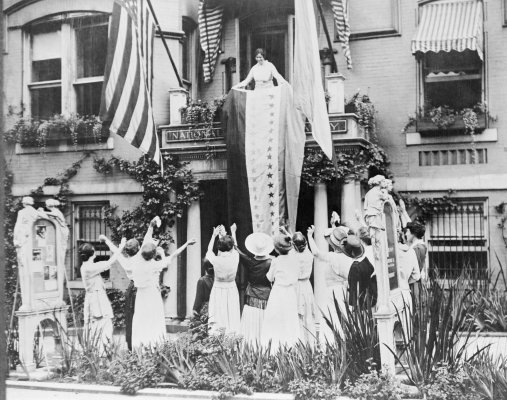 99 Years After Women’s Suffrage, the Fight for the Vote Continues
Next Up: Editor's Pick