“I screwed up,” she said. “The comment I made about dance was insensitive, it was stupid and I am deeply sorry.”

Spencer also sat with three celebrity dancers to apologize in person and discuss their experience as men who dance.

“In addition to the usual 1st or 2nd grade things like math, science and history, the future king of England will be putting down the PlayDough to take on religious studies, computer programing, poetry and ballet among other things,” Spencer said Thursday on Good Morning America, and laughter ensued. “Prince William says George absolutely loves ballet. I have news for you Prince William, we’ll see how long that lasts.”

The internet was swift in criticizing Spencer, saying she was bullying a boy for enjoying ballet. Celebrities like George Takei and choreographer Travis Wall shared their frustrations on Twitter; Rosie O’Donnell chimed in with a video, saying “Lara Spencer, seriously? Laughing at boys who take ballet?”

Spencer apologized on Instagram Friday. “My sincere apologies for an insensitive comment I made in pop news yesterday. From ballet to anything one wants to explore in life, I say GO FOR IT,” she wrote. “I fully believe we should all be free to pursue our passions. Go climb your mountain-and love every minute of it.”

Social media users, working to reframe the controversy, are also sharing photos and videos of talented young performers and dance enthusiasts — be they danseurs or performers in other disciplines — with the hashtag #BoysDanceToo.

In her Monday apology segment, Spencer sat with Wall, Robbie Fairchild, a ballet dancer and actor in the upcoming Cats film, and Fabrice Calmels, dancer at the Joffrey Ballet in Chicago.

“For me the lesson is that words hurt,” Spencer told Wall, Fairchild and Calmels. “Again, I’m really sorry.”

Whether Kensington Palace joins in with new pictures of George remains to be seen, so until then perhaps consider who he has to thank for the dancing gene:

Britain's Prince William, Duke of Cambridge, learns a dance move with Scariofunk dance collective during a visit to Caius House Youth Centre in London on September 14, 2016. -
JUSTIN TALLIS—AFP/Getty Images
Prince William, Duke of Cambridge and Catherine, Duchess of Cambridge and dance with local ladies at a Vaiku Falekaupule Ceremony during the Royal couple's Diamond Jubilee tour of the Far East on September 18, 2012 in Funafuti, Tuvalu.
Samir Hussein—WireImage
Princess Diana pictured in the grounds of Government House in Auckland, New Zealand a young, and agile, Prince William on April 23, 1983.
Princess Diana Archive—Getty Images
Most Popular on TIME
1
Of Course Sarah Cooper Has Her Own Spin on President Trump's TikTok Thoughts
2
Barron Trump's School to Stay Closed Amid COVID-19
3
Navy Investigates Video of Dogs Attacking Man in Kaepernick Jersey 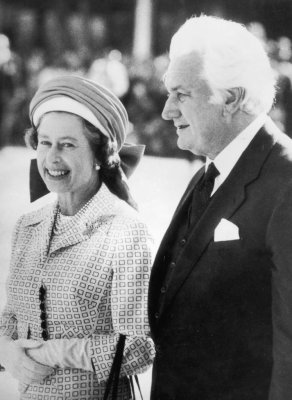