As in other years, Democratic presidential candidates hitting the Iowa State Fair this weekend came armed with policy ideas targeted at rural farmers who dominate the state. The difference this time: Those proposals were about climate change.

In a sign of how far the pressing issue of reducing greenhouse gases has penetrated this primary season, at least nine 2020 candidates have published climate change proposals specifically targeted at farmers, while many of their rivals were discussing similar ideas.

When TIME reached out in February to ask the nascent presidential campaigns about how their candidate would tackle climate change, most offered vague support for a Green New Deal or promised to recommit the US to the Paris Agreement. Now, just six months later, not only do most have substantial climate plans, but they are also dropping targeted proposals for specific audiences.

“At every event, the candidates will talk about climate change,” says Rob Hogg, an Iowa state senator from Cedar Rapids.

On the trail in Iowa, Ohio Rep. Tim Ryan talked at length in multiple speeches about how farmers can capture carbon dioxide in soil. Meanwhile, Washington Gov. Jay Inslee delved into the wonky details with voters about the climate challenges facing farmers and promised a new plan including climate-focused crop insurance and a mechanism to pay farmers for capturing carbon.

“Farmers can be very important to defeating the climate crisis,” Inslee told an Aug. 10 gathering in Polk City. “Farmers can get paid for a new service, which is getting carbon dioxide out of the atmosphere and getting it into the top soil.”

But it’s not Green New Deal activists who have prompted the climate campaigning here in Iowa. Voters say they are feeling the effects of climate change and are worried it will get worse. A new poll shared exclusively with TIME shows that nearly 70% of registered voters in the state are worried about climate change and 30% of Democrats say it ranks as one of their top two issues. The poll, conducted by Yale and George Mason universities, also shows that Iowans are feeling the impacts of climate-related extreme weather directly: 39% of Iowans said either they or a family member had been affected by extreme weather in the past year.

The proposals build on a recognition that agriculture can play a big part addressing reducing emissions and addressing climate change. A report released last week by the Intergovernmental Panel on Climate Change (IPCC), the UN’s climate science body, found that agriculture, forestry and other land use generate nearly a quarter of global climate-change causing emissions. At the same time, implementing a range of practices — from changing livestock feed to adapting how soil is managed — can significantly reduce emissions.

“The aggregate impact of lots of these local actions, whether at the farm scale or at national scale, can give us potential global solutions, can help us meet [climate] mitigation goals,” says Pamela McElwee, an associate professor at Rutgers University and a lead IPCC report author.

Booker released perhaps the most comprehensive proposal through his Senate office. His legislation would provide tens of billions of dollars in additional funding to the U.S. Department of Agriculture to conservation programs that help farmers implement methods that sequester carbon, like planting new cover crops and changing the way they use fertilizer. His proposal also includes funding to help farmers use renewable energy, funds agricultural research and protects “environmentally sensitive farmland.”

Many of the other proposals center around around providing funding to help farmers change their practices to capture carbon in soil through an existing USDA program known as the Conservation Stewardship Program. Warren proposed spending $15 billion annually on the effort. Gillibrand said she would use the same agency and also called for an insurance program that would allow farmers to “innovate.” Biden said he wants to use CSP to eliminate emissions from agriculture. Bennet has also proposed paying farmers as well as creating a whole new agency tasked with thinking of big solutions to agriculture and climate akin to DARPA, the Defense Advanced Research Projects Agency.

“We need to change our farming practices,” says Bennet, who told a crowd in Des Moines that incorporating farmers into talks about climate change would make future solutions more durable.

The messaging has registered on the ground in agricultural communities, with leading agriculture publications reporting on the flurry of plans and farmers, whose livelihood depends in large part on federal policy, taking note.

Matt Russell, a beef and produce farmer in central Iowa who runs Interfaith Power and Light, a group that helps people of faith talk about climate change, says the new conversation can help change the political dynamics around climate change for farmers in Iowa. For years, Republicans have used the phenomenon to drum up fear of new regulations on farmers, but giving farmers an opportunity to participate in solutions changes that dynamic.

“What we’re seeing is a significant change in how the Democrats are engaging with farmers,” says Russell. “This is a new way of talking.” 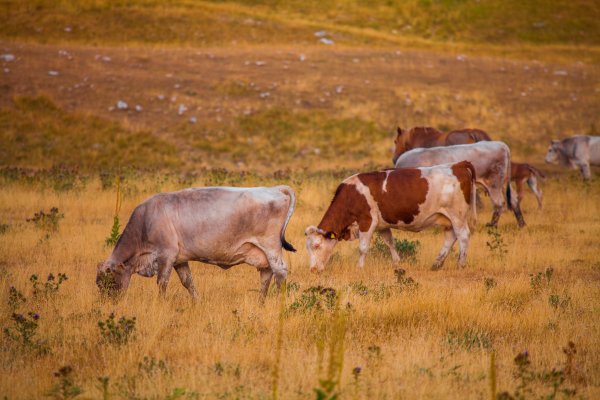 How Eating Less Meat Could Help Protect the Planet
Next Up: Editor's Pick