Washington state Gov. Jay Inslee jumped into the 2020 Democratic presidential primary Friday with a promise to put climate change front and center in both his campaign and his potential presidency.

Given the serious risks of rising global temperatures, Inslee told TIME in an interview ahead of his announcement that climate change cannot be one item “on a list of things to do.” He pledged to coordinate an unprecedented effort to tackle the issue.

The two-term governor, who previously served seven terms in the U.S. House of Representatives, enters a crowded field of candidates, many of whom have better name recognition and more buzz, and he hasn’t featured prominently in Democratic primary polling to date.

But Inslee is betting that voters in early states will be drawn to his record and message on climate change. Inslee pointed to a poll from the Center for American Progress, a progressive group, showing that tackling climate change is a key concern for primary voters in five early voting states, an issue equalled only by universal health care.

To be sure, Democrat candidates all have noted the importance of tackling climate change, but so far none have put it as front and center as Inslee promises to do. Most candidates have endorsed a resolution from the progressive wing of the party calling for a Green New Deal that would seek to supply all of the country’s power by zero-emissions sources by 2030, although some do not necessarily endorse all elements of the plan.

And the topic comes up frequently in speeches and campaign messaging, often as a way of hitting President Donald Trump, who announced in 2017 that the U.S. will leave the Paris Agreement on climate change and previously called climate change a hoax.

Still, none of the other candidates in the field have signaled that climate change will be the centerpiece of their campaign the way that Inslee plans. Inslee will host a series of climate change-related events in Iowa next week before heading to Nevada and California.

Inslee referred to his record on a range of policies from the state’s clean energy standard to a program for electrifying the transportation sector and touted his leadership of an alliance for cities and states to commit to the Paris Agreement. And more than a decade before the Green New Deal entered the national lexicon, Inslee authored a 2007 book calling for a massive spike in government funding for research and development and investment in clean energy that would create so-called green jobs.

While endorsing a Green New Deal has emerged as a litmus test for Democratic presidential candidates hoping to win the support of the party’s progressive wing, some say ranking climate change as the top issue may prove more important down the road.

Scientists say meaningful action on global warming cannot wait — whatever solution a future president may choose to pursue, and an incoming president typically faces a narrow window to burn political capital and enact sweeping new legislation. Trump enacted a tax cut early in his administration, but has struggled to notch legislative victories since then. President Barack Obama chose to put his energy behind the Affordable Care Act early in his presidency rather than his party’s major climate change bill, which passed the House but never received a vote in the Senate.

“You have to be willing to spend your political capital on it,” says Inslee. “I would be willing to do that, and that is the only way this is going to get done.”

Inslee declined to lay out the specific planks of a policy platform, but he said he was looking at a combination of direct investment to stimulate clean technologies and regulations to mandate emissions reductions. Carbon pricing mechanisms should not be taken off the table but are not part of his current thinking, he said, adding that his current work in Washington state will accomplish the same emissions reduction goals as the carbon tax that failed to pass a statewide ballot initiative last year would have.

“Our environmental laws have been extremely successful when we’ve applied them,” he says. “We just haven’t applied them to the most dangerous pollutant at the moment, which is carbon dioxide and methane.” 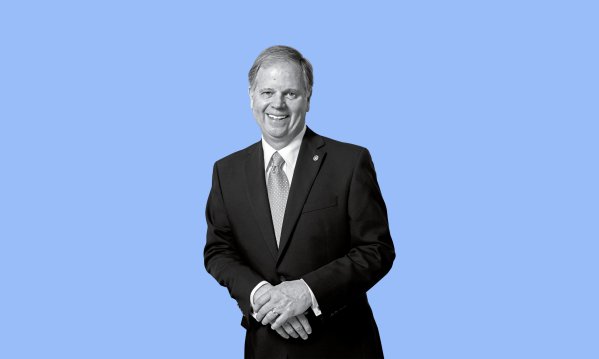 Senator Doug Jones Defeated Roy Moore in 2017. Here's What He Has to Say About 2020
Next Up: Editor's Pick