Whoever leads the European Commission—the EU’s executive arm—is the most powerful person in the day-to-day affairs of the European Union and oversees 32,000 EU bureaucrats. Traditionally, the role of the European Commission (made up of Commissioners from each one of the 28 member states; 27 once Britain gets on with Brexit) is to propose new legislation and policies that are then voted on by the European Parliament (more on that below) and to implement those policies in areas reserved to the EU (as opposed to national governments); it also speaks for the EU in international negotiations. The President of the EC decides which Commissioners get which policy portfolios, and generally drives the EC’s policy agenda; he/she also represents the EU in major international meetings like the G7 and G20. Von der Leyen, who is a close ally of Angela Merkel’s and a member of the center-right Christian Democratic Union (CDU) party back in Germany, is the first woman to ever hold the post.

But her victory came at a cost. One of the key concessions Von der Leyen made to get reluctant members of European Parliament (MEPs) on board was giving them the “right of the initiative”, i.e. assurances that the Commission would act on whatever resolutions were passed by the European parliament. Up until this week, it was only the Commission that could propose laws and MEPs would have to vote whether to approve of them or not. In a bid to get more MEPs to back her, Von der Leyen also offered to put Europe on a path to carbon neutrality by 2050 and to discuss the introduction of a minimum wage (among other pledges).

Why was it necessary for Von der Leyen to offer so many concessions to secure the post? Because her nomination didn’t come from the European Parliament as has been expected by MEPs, but rather as a compromise from the leaders of the major European countries in a backroom deal (the same deal that resulted in Christine Lagarde heading up the European Central Bank). That institutional clash made her election difficult, as did the fractious political landscape of Europe.

European politics are much messier than traditional left-right politics (though that plays a big role, too); it’s also about integration vs. Euro-skepticism, Eastern Europe vs. Western Europe, core Europe vs. periphery Europe, pro-climate change action vs. anti, and so on. And while European leaders—notably France’s Emmanuel Macron and Germany’s Merkel—were able to strike a deal that secured a majority among MEP members (however slight), the roundabout way that Von der Leyen (a committed Europhile who supports more European integration and reforms, and even a European army) was elected will provide more fodder for anti-EU politicians across the continent railing against unaccountable bureaucrats back in Brussels.

Von der Leyen is a clear sign that at the EU level, things aren’t changing much. Her policy priorities will be similar to her predecessor’s, and her general orientation is similarly very pro-Europe. Populists remain at the political margins (at least in Brussels), and don’t agree on much of anything amongst themselves to pose an immediate threat to the pro-European establishment on the EU-wide level. Europe isn’t in danger of falling apart. But an EC helmed by Von der Leyen doesn’t change the fact that the EU is becoming less important on the global stage. To be fair though, Von der Leyen is the symptom, not the cause, of that reality.

“Ursula von der Leyen has scraped in by 9 votes. Power but no legitimacy.” –the UK’s Nigel Farage, a leading authority on narrow victories—Brexit was one—and how legitimate they are.

That Angela Merkel was the big winner in all this horse trading for getting one of her government ministers the most important job in Brussels (she’s also the first German to hold the post in more than 50 years). The even-bigger winner is Emmanuel Macron, who backed Von der Leyen for the post (who in addition to sharing his pro-integration and pro-reform orientation towards Europe now owes him for his political backing of her candidacy) and secured the role of European Central Bank head for his fellow Frenchwoman Christine Lagarde. As for Merkel, the elevation of Von der Leyen as the compromise choice came at the cost of her initial proposal to install a Socialist candidate at the head of the Commission… which infuriated her Socialist coalition partners back home in Germany and adds even more pressure to her already-straining coalition.

Ursula Von der Leyen is more of the same. That’s not what a waning Europe actually needs right now… but it’s what it can get. She’s not going to move Europe forward, but she won’t let it fall apart, either. 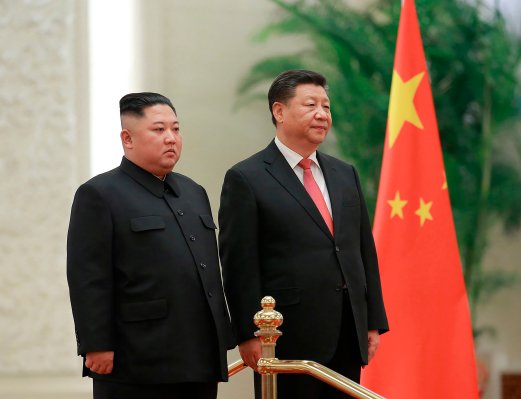 The Quick Read About… President Xi Jinping’s Trip to North Korea
Next Up: Editor's Pick