Danish Prime Minister Mette Frederiksen has dismissed President Donald Trump’s suggestion that the U.S. could buy Greenland from Denmark, calling it “an absurd discussion” in an interview with a local newspaper Sunday.

Trump confirmed Sunday that he would be “interested” in purchasing the island for the U.S., after the Wall Street Journal reported that he has repeatedly brought up the idea with advisers.

“We are good allies with Denmark, we protect Denmark like we protect large portions of the world, and the concept came up,” the President told reporters in New Jersey. “Strategically it’s interesting, and we would be interested, but we will talk with them a little bit. It’s not number one on the burner.”

Greenland, the world’s largest island, is an autonomous Danish territory with its own leader and own parliament.

During a visit to Greenland to meet Premier Kim Kielsen, Frederiksen told the Sermitsiaq newspaper she hopes Trump’s suggestion was not “seriously meant.”

About two thirds of Greenland, which is more than three times the size of Texas, lies inside the Arctic Circle. More than 80% of the island is covered by a vast and thick ice-sheet — which is melting at an increasingly rapid pace as a result of global warming. While no oil has been found in Greenland, the retreating ice could uncover minerals and other resources that could be exploited.

Frederiksen said she recognized that the Arctic “is becoming increasingly important to the entire world.”

“Jokes aside, we will of course love to have an even closer strategic relationship with the United States,” she added.

Trump is set to visit Denmark in early September as part of a trip to Europe. 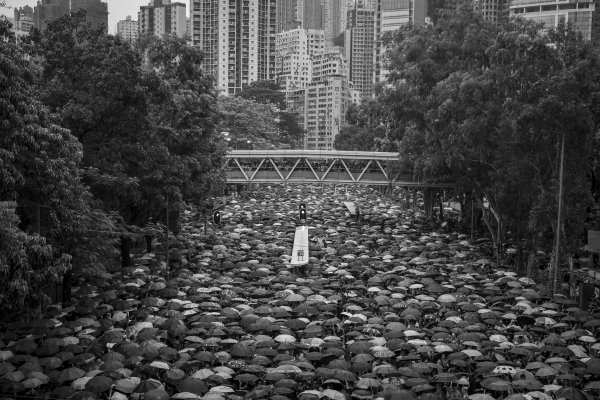 Large Crowds Rally for Democracy in Hong Kong
Next Up: Editor's Pick