What Happens Next in the Hong Kong Protests

To recap, the initial round of Hong Kong protests were kicked off by the April decision of the territory’s Beijing-backed Chief Executive Carrie Lam to introduce a bill that would allow for criminal extraditions to mainland China, which pro-democracy advocates feared would allow Beijing to crackdown on dissidents more forcefully. The legislation was met with massive street protests, forcing Lam to put a hold on the legislation, but she refused to withdraw it completely and also refused to resign (as protestors had demanded). This angered pro-democracy supporters further, as did the accompanying police brutality that the protestors were met with.

Since then, the demands of protestors (who have no designated leader, adding to the chaos) have swelled to include amnesty for all arrested protestors, independent inquiries into police violence, and the right to directly vote for Hong Kong’s Chief Executive and the governing Legislative Council, among other concessions.

At heart of the matter is the future of Hong Kong’s autonomy and democratic rights within a China that is increasingly clamping down on those freedoms. When Hong Kong, a former British colony, was returned to China in 1997, it was with the understanding that the territory would operate under a “one country, two systems” approach until at least 2047. While Beijing would be responsible for the territory’s defense and foreign policy, Hong Kong would be allowed to retain freedom of speech and freedom of assembly, in addition to other liberties that are not afforded to the mainland Chinese population. But as China has grown in both economic power and geopolitical relevance, it has also grown more authoritarian, forcing matters with Hong Kong to a head.

So far, China has been reluctant to take the provocative act of intervening directly by sending in its military, preferring to let Hong Kong police take the lead in suppressing the protests. But as Hong Kong police have escalated the fight—both in terms of the violence and by deploying plainclothes officers to make arrests—the protestors have changed tack, leading to the decision to occupy Hong Kong’s airport early in the week, forcing the cancellation of hundreds of flights and stranding foreign passengers. The purpose of the airport occupation was both to disrupt the day-to-day functioning of one of the world’s most important financial centers, and to raise the visibility of the protests to an international level. Both targets were achieved, but the ensuing violence at the airport—in addition to the scuffles between police and protestors that flooded television and social media, protestors also detained a number of people they suspected of being Beijing informants and denied them medical assistance—has fueled perceptions that these protestors are more extremists than peaceful objectors.

This is a narrative that Beijing has leaned into, hoping to paint the protestors as radicals and separate them from the Hong Kong population at large, which had seemed to be tiring of the protests and wants to see life return to normal. Realizing that recent events have tarnished their image, the protestors quickly turned apologetic, framing their actions as proof of their desperation. Beijing will be watching closely to see how big turnout at the next round of protests will be. Typically, Beijing’s approach to previous protests has been either to offer minor concessions, or to let them run out of steam on their own (as the did with the 2014 Umbrella protests). The next few days will be critical.

Back in 1997, Hong Kong accounted for more than 15 percent of China’s overall GDP. Today, it contributes less than 3 percent. Hong Kong is still critical to China as a way to access Western markets, but in 2019 there are plenty of Western markets (and firms) willing to come to China. That helps explain why Beijing believes it can afford to take such a hard line against the protestors.

That these protests are all about China and its attempt at smothering Hong Kong’s democratic freedoms. That’s the main driver of the protests, but it also doesn’t help that almost 1 in 5 people in the city live in poverty and inequality is at its highest rate in almost 50 years.

Leave aside the rhetoric—actual US policy toward Hong Kong thus far has been the same under President Donald Trump as it would have been under Barack Obama or George Bush. But Trump’s language (or lack thereof) has given the Chinese government a green light to take a more aggressive posture. And a tweet tying the US-China trade dispute to Hong Kong isn’t going to change that fact. It also sends a clear message to other strongman leaders as well about what the US is now willing to tolerate.

Plenty of US politicians are up in arms about Trump’s refusal to wade into the Hong Kong situation more forcefully on the side of the pro-democracy protestors. But if anyone actually believes Trump can insert himself into a highly combustible situation and calm everyone down, they haven’t been paying attention the last 2.5 years. 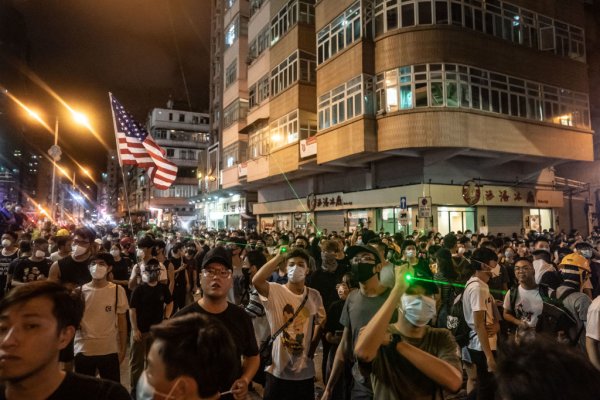