Teenage pop culture is rarely comprehensible to adults. Elvis sounded like noise to parents raised on Bing Crosby. MTV baffled baby boomers. And now, many of us watch teens obsess over influencers—charismatic young people, often with no discernible talent, who’ve built huge followings on social video platforms—and can’t imagine what they’re getting out of it.

Jawline, a hit Sundance documentary that comes to theaters and Hulu on Aug. 23, effortlessly bridges that generation gap. In profiling Austyn Tester, a YouNow broadcaster in rural Tennessee who was 16 at the time the film was shot, the young director Liza Mandelup translates his world into terms people of any age can understand, simply by observing his life instead of explaining it. In broadcasts that function a bit like episodes of a talk show, the floppy-haired high schooler with boy-band bone structure smiles, flirts and offers vague koans (“In this life, there are settlers and adventurers”). Despite the blandness of his affirmations—he talks a lot about “spreading positivity”—Austyn comes across as genuine.

By growing his audience, he hopes to escape a stifling small town where classmates used to call him gay and his single mom confesses she’d be “miserable” if not for her two sons. At an impromptu meet-up that illustrates both the familiarity and the strangeness of such low-level celebrity, he’s overwhelmed by the 10 or so girls who show up at a mall to snap selfies and angle for a kiss. Though his platform is new, Austyn is looking to break into the decades-old business of teen idol-dom. In eras past, he might’ve formed a garage band or sent amateur headshots to modeling agencies in hopes of getting discovered—and repackaged to appeal to girls a few years younger than himself. Like Austyn, this audience is full of kids who feel constrained and dissatisfied. Some get bullied. And what they see in influencers, whether they have 20,000 followers or 20 million, is what so many screaming Beatlemaniacs saw in Paul: safe imaginary boyfriends who seem kinder than the guys at school.

There’s a darker side, of course—not just the not-necessarily-new danger of appearance and persona usurping talent and artistry as vehicles for fame, but also the cottage industry of opportunists who exploit naive wannabes like Austyn. Jawline’s secondary subject is Michael Weist, an officious, baby-faced talent manager in his early 20s who compares social media to the gold rush and decompresses with Rodeo Drive shopping sprees. Though he crosses paths with Austyn on the convention circuit (imagine a Justin Bieber show that’s all fan interaction), Michael ultimately dismisses him with a glance at his follower stats: “I wouldn’t touch him.” Yet, as Mandelup subtly demonstrates in this wise, empathetic film, these cynical puppet masters only further tie social media stars to the teen-idol industries of generations past. Same as it ever was. 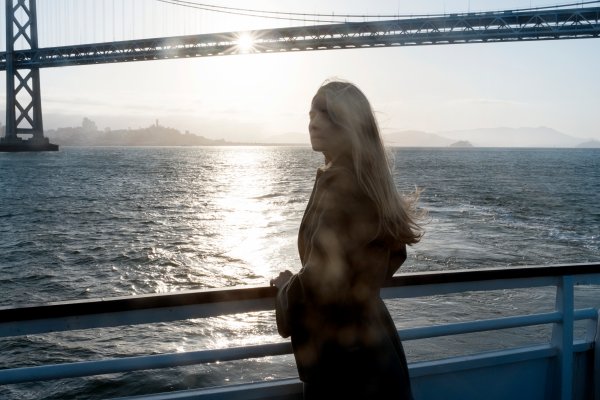 The OA Fans Have a Pretty Convincing Theory About the Show Not Really Being Cancelled
Next Up: Editor's Pick