News of the nuclear explosion at a military base in the far north of Russia trickled out slowly.

First came the bulletins on state media of at least two people killed in a mysterious accident. Then came news of a spike in radiation in the area, and footage reportedly showing doctors in hazmat suits treating the victims. Finally, on Aug. 13 – five days after the blast – the Kremlin appeared to come clean, confirming that five nuclear scientists and at least two others had died while testing one of the newest weapons in President Vladimir Putin’s arsenal.

Indeed, for nuclear experts and negotiators, there was a sense that this particular accident had been waiting to happen. Putin had promised the world a new type of nuclear missile during his state of the nation address last year, a pledge he illustrated with an animation of a rocket landing with a bang in Florida. But the types of weapons he was bragging about—from nuclear-armed cruise missiles to underwater drones packed with radioactive materials — are notoriously difficult and dangerous to build.

“The systems that Putin has been talking about publicly are rather exotic and not as far along, or anywhere close to being ready for deployment,” says Lynn Rusten, a nuclear expert who oversaw arms control issues at the National Security Council under the Obama Administration. “That is why the U.S. hasn’t pursued them.”

At least not yet. But one lesson from last week’s explosion may be that any country, be it Russia, the U.S. or China, can pursue such weapons without violating any rules. That’s because, over the past few years, the system of treaties that supports the world’s security architecture has been unraveling along with the diplomatic ties between Russia and the West.

On August 2, after accusing Russia of deploying banned weapons for years, the U.S. formally withdrew from the Intermediate-Range Nuclear Forces (INF) treaty, which was signed in 1987 to contain both countries’ arsenals. An even more ambitious nuclear disarmament deal between the U.S. and Russia, known as New START, is due to expire in 2021, and there isn’t much hope of it being renewed. Putin said in June that he would be willing to extend the treaty for another five years. But John Bolton, the National Security Adviser to President Trump, has said the U.S. is “unlikely” to go along.

The result is a world with less constraints on nuclear weapons, and more countries with the ability to build them. “There’s a qualitative arms race going on,” says Gary Samore, who helped negotiate New START. “There’s a whole new class of strategic weapons that the U.S., Russia and China are working on that are not subject to any arms control treaties,” Samore tells TIME.

The explosion on Aug. 8 highlights the danger of that new reality. State news agency Itar-Tass reported that the blast was powerful enough to throw several staff members from Rosatom, the Russian state nuclear agency, off the testing platform and into the White Sea. Though no jump in radiation levels has yet been detected outside Russia, officials across northern Europe have expressed concern that the damaged weapon could contaminate the sea and pose a danger to their citizens. The Russian village closest to the blast site was reportedly ordered to evacuate on Monday, but local officials said the next day that no evacuation would take place.

The secrecy around the explosion highlights another unpleasant fact about the nuclear era: Governments hate to admit their mistakes when it comes to handling their most dangerous technology, and the desire to hide those mistakes has often made them even deadlier.

After the explosion at the Chernobyl nuclear power plant in 1986, the Soviet authorities waited days before evacuating the area, exposing many thousands of its citizens to extreme levels of radiation. During the first year of Putin’s presidency in 2000, a Russian submarine known as the Kursk sank in the Barents Sea, and his generals were so obsessed with protecting the vessel’s nuclear secrets that they refused foreign help with the rescue effort for several days. By the time Norwegian divers were allowed to reach the submarine, all 118 sailors on board were dead.

Russia’s citizens, like the rest of the world, do not yet know the full extent of the damage caused by last week’s explosion near the city of Severodvinsk. Learning that will take time and a level of transparency that the Kremlin has not yet been able to meet.

But even the available details are enough to understand that this was not simply a case of rotten luck. Given the rate at which the present arms race is accelerating, and the legal constraints on building these kind of weapons are unraveling, such events seem all but inevitable.

“We’re entering a period of intense competition,” says Michael Carpenter, who formerly served as the top Russia expert at the Pentagon. “How we manage it is vitally important to our national security.” And, when it comes to managing nuclear weapons, to the security of the world.

With reporting by Madeline Roache / London 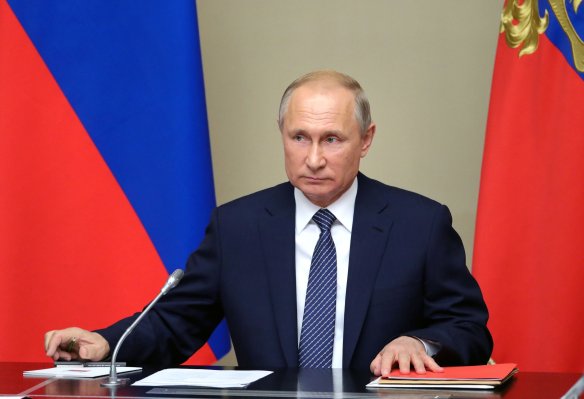 Russia: Small Reactor Blew Up in Deadly Accident
Next Up: Editor's Pick