Mosquito-Borne West Nile Virus Soared in 2018, According to CDC Data

Severe cases of West Nile virus were 25% more common than usual in 2018, and transmission patterns appeared to shift to new regions, according to a new report from the Centers for Disease Control and Prevention (CDC).

West Nile is a mosquito-borne virus that is usually asymptomatic, but causes side effects including fever, body aches, vomiting, diarrhea and joint pain in about 20% of people who are infected. In serious cases, it can lead to complications including brain inflammation and meningitis. It is by far the most common mosquito- or tick-borne virus in the U.S.—especially in 2018, according to the CDC’s data.

More than 2,600 West Nile diagnoses were recorded in 2018—more than any year in the prior decade except 2012, when more than 5,000 cases were reported. The vast majority of cases were contracted during the summer, and 63% of cases progressed to include neurologic symptoms, a 25% increase over the average from 2008 to 2017. Nationwide, 167 people died from the disease in 2018.

California had the most cases of any state, at 154, but the CDC notes that diagnoses were less common than usual there and in other Western states, including Arizona. Meanwhile, states in the mid-Atlantic—including New Jersey, New York and Pennsylvania—reported more cases than usual. An Alaska resident even tested positive for West Nile for the first time, though the CDC says the patient likely picked it up elsewhere. The Midwest reported the highest case counts overall.

West Nile transmission appears to be low in 2019, according to preliminary CDC data. Only 128 cases have been reported so far, with most diagnoses clustered in Arizona.

Though a very small number of West Nile cases have been spread from mother to baby or through blood or organ donations, mosquito bites are the primary vehicle of transmissions. As such, the CDC recommends wearing bug spray when spending time outside, and treating outdoor gear with insect-repelling permethrin. 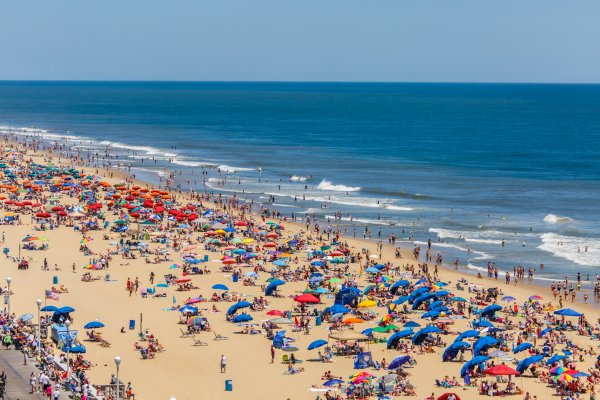 Your Summer Beach Trip Could Put You at Risk of Getting Sick. Here's What You Need to Know
Next Up: Editor's Pick