It happened. We got a “Sweet Victory” Super Bowl.

It may have been short-lived, but passionate Spongebob SquarePants fans with a dream just got their wish.

Thanks to some hints floating around the internet from Maroon 5 and others, SpongeBob SquarePants fans had high hopes that the famous cartoon character would make a Super Bowl LIII cameo during the Maroon 5 halftime show Sunday night.

One main pre-show hint was a brief appearance of the Pineapple-Under-the-Sea-dwelling creature in a tweeted video that Maroon 5, the headlining Super Bowl 2019 halftime performers, shared last month. About 30 seconds in, a cryptic snippet of SpongeBob appears. That snippet turned out to be advance confirmation that “Sweet Victory” would be part of the show.

While SpongeBob and Maroon 5 don’t normally have any particular connection, SpongeBob does have a song — “Sweet Victory” — that was performed in a season two episode of the show called “Band Geeks” by the Bikini Bottom Super Band. Longtime fans believed this meant “Sweet Victory” could end up on Maroon 5’s set list, or in some other way SpongeBob would be involved in the Super Bowl LIII Halftime Show.

It’s worth noting that many responses to Maroon 5’s video teaser were related to the potential for a SpongeBob song cameo. And the SpongeBob snapshot in the video is the only cartoon that appears: the rest of the footage consisted of clips of the band’s preparations and performances and hints of Travis Scott and Big Boi, two rappers who were also featured at the show.

A pair of broadcast journalists appeared to have captured some evidence of the titular star getting his shine on during a Maroon 5 rehearsal at the stadium.

There’s more to it, too: a Change.org petition was set up in January calling for a “Sweet Victory” tribute at the Super Bowl. It’s collected nearly 1.2 million signatures so far. The reason? To honor SpongeBob creator Stephen Hillenburg, who passed away in November last year.

In another bump for the theory, Mercedes-Benz Stadium’s Twitter account even shared a GIF of SpongeBob dancing in his band outfit all the way back in December, adding fuel to fans’ fire about the potential cameo.

People even bet on it — literally. The odds, according to an online betting pool, were in favor of SpongeBob appearing at the Super Bowl, in particular popping up in an inflatable costume.

In another more under-the-radar hint, according to CNET, Rodger Bumpass, the voice actor behind the character of Squidward, reportedly posted on Facebook that he was going to be making some kind of Super Bowl introduction for the halftime show.

SpongeBob fans, at least, were convinced. Turns out, they were right to be.

Although there was a SpongeBob appearance, for many it was not, ultimately, enough. 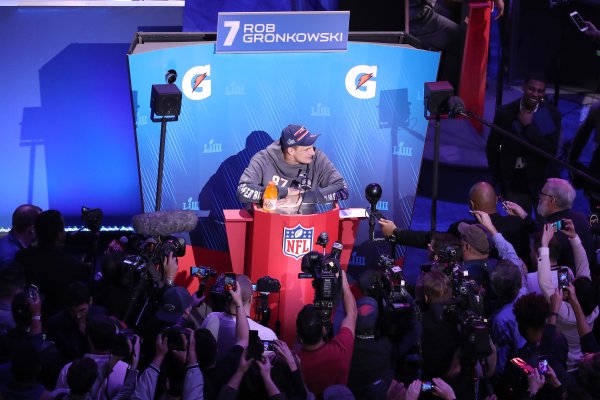 Here's Gronk Getting His Groove On as Super Bowl Prep
Next Up: Editor's Pick