Einstein Feared a Nazi Atom Bomb—But Immigrants Made Sure the U.S. Got There First

Portrait of physicist Albert Einstein, sitting at a table holding a pipe, circa 1933.
Lambert/Getty Images
By Trevor Lipscombe

Chaos reigns at the border as the United States confronts a massive influx of immigrants. Some, in fear for their lives, seek asylum from brutal regimes. Others seek the ever-elusive American dream. But first, they are held, sometimes in appalling conditions, until processed by immigration authorities.

This is not the U.S.-Mexican border in 2019, but Ellis Island in the 1930s. As the Nazis seize power and stamp down their jackboots on Jewish communities and left-leaning intellectuals throughout Europe, many flee to the United States. One of the new arrivals is Albert Einstein, who arrived in 1933 and several years later became a naturalized citizen, taking the oath of allegiance in Trenton, N.J.

Einstein’s entry to the United States was smoothed by his having already received a Nobel Prize in physics, even if his work was dismissed as mere “Jewish physics” by another Nobel Laureate, Philipp Lenard, who served as Chief of Aryan Physics for the Third Reich. Einstein, whose special theory of relativity had been published in 1905, had achieved international fame, even if — as he quipped — no one really understood why. He was not the only refugee scientist to land on American shores, but his influence dwarfed the others.

As war approached, Einstein, a lifelong pacifist, did something out of character and out of necessity. On Aug. 2, 1939, he signed a letter addressed to President Franklin Delano Roosevelt, warning that the Nazis might be developing nuclear weapons. Einstein urged the United States to stockpile uranium ore and begin work on its own atomic weapons.

Einstein did not write the letter — that was the work of Hungarian émigré Leó Szilárd, with whom Einstein shared a patent for a novel refrigerator. Szilárd composed it with help from two other Hungarian physicists, Edward Teller and Eugene Wigner who (with Hans Bethe) would be jokingly referred to as the Four Hungarians of the Apocalypse. With the letter freshly typed, Teller drove Szilárd out to Peconic, Long Island, where Einstein was staying, to get his signature.

No one else signed it. No one else had to. Thus the Manhattan Project was born.

Aug. 2, 1939: The first page of a letter from the physicist Albert Einstein to President Franklin Delano Roosevelt raising the possibility that Germany could build an atomic bomb.
MPI—Getty Images

Six years later, on two fateful days in August 1945, the bombs known as Little Man and Fat Boy were dropped on Hiroshima and Nagasaki, Japan – on soldiers, sailors, women and children alike. These detonations accelerated the end of the Second World War, but presaged the Cold War that dominated the latter half of the 20th century.

Einstein regretted the letter. In a 1947 Newsweek article headlined “The Man Who Started It All,” he was quoted as saying, “Had I known that the Germans would not succeed in producing an atomic bomb, I would never have lifted a finger.”

In fact, the Nazis could not muster the breakthroughs necessary to achieve the nuclear weapons Einstein and his fellow physicists feared. So many scientists had fled Nazi-occupied territory that the Third Reich was short of the brain power they needed to develop the bomb. Yes, they had Lenard and Werner Heisenberg, but the ranks of first-rate nuclear scientists in Germany were deeply depleted due to Hitler’s policies.

And the Nazis’ loss was the United States gain.

Emigres brought their expertise to bear on the Manhattan Project. Enrico Fermi fled Italy because of the anti-Jewish laws that pertained to his wife. Emilio Segrè ran afoul of those laws, too. Rudolf Peierls, who settled in Britain, was a German-born Jewish physicist and Felix Bloch, who like Peierls also briefly worked on the bomb, was likewise a Jewish refugee from the Nazis. Together with Szilard and Wigner, these rank among the superstars of 20th century physics.

Did the United States understand what they were getting when they allowed the physicists in? A stream of future Nobel Prize winners, a group of people committed to work to defend the freedom of their new country against the tyranny of their homelands? A group of people whose research not only enabled the development of the bomb, but later allowed the stars and stripes to be planted by Neil Armstrong and Buzz Aldrin at Tranquility Base on July 20, 1969? Did the Nazis comprehend what they had lost, by developing a culture that saw so many of their internationally recognized scientists leave Europe? Probably not.

But we have learned. The Brain Drain caused by the Nazis established the United States as a scientific superpower. The Nobel Prize in Physics might be awarded in Stockholm by the Royal Swedish Academy of Sciences, but it is now as American as apple pie. Many of those who get a Nobel nod live here in the United States, whether born here or attracted here by the vibrant scientific research community.

The challenge, though, is to keep this research coming. To starve a nation of its scientists, or its scientists of funding, is a losing strategy. In the last quarter of 2018, a quarter of all applications for H1-B visas, those that enable businesses to bring highly skilled technical workers to the United States, were declined. That’s up from only 5% in the same period of 2014. And if Silicon Valley and others can’t bring skilled workers in to innovate and remain competitive, those same companies could outsource their operations overseas. Perhaps it is time to look closely at visa numbers for those with significant technical expertise and to increase them substantially.

Now that would be a letter to a president that Einstein could sign without regret.

Trevor Lipscombe is director of the Catholic University of America Press and co-author of Albert Einstein: A Biography (Greenwood Press, 2005). 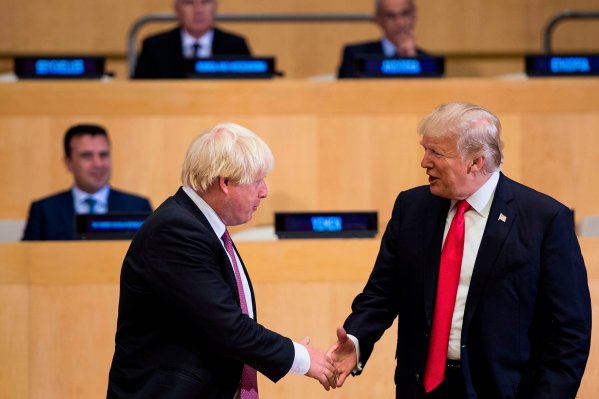 Donald Trump and Boris Johnson Rode the Same Wave Into Power. History Suggests the Parallels Won’t Stop There
Next Up: Editor's Pick