Shohrat Zakir, deputy secretary of the CPC Committee and chair of the Xinjiang Uyghur Autonomous Region, speaks at a press conference in Beijing on July 30, 2019.
Wang Zhao—AFP/Getty Images
By AMY GUNIA / HONG KONG

An official from China’s northwestern Xinjiang region called the country’s practice of detaining Muslim minorities a “pioneering” approach to combating terrorism, and claimed that most people interned in controversial facilities have been released.

Speaking at a press conference in Beijing Tuesday, Shohrat Zakir, Xinjiang’s Uighur governor, said that most of the detainees who were held in the euphemistically dubbed “re-education centers” have left after signing “work contracts” with area companies, the Associated Press reports.

Zakir declined to provide the number of people still arbitrarily detained, according to AP, but the U.S. State Department estimates up to 2 million Turkic Muslims are being held in the internment camps.

Beijing has drawn international condemnation for the practice. After initially denying the existence of a mass incarceration program, the Chinese government defended the detentions as a form of “re-education” and “vocational training,” comparing the centers to “boarding schools.”

“Most of the graduates from the vocational training centers have been reintegrated into society,” Zakir said. “More than 90% of the graduates have found satisfactory jobs with good incomes.”

Detainees who have been released from the camps however have reported being subjected to political indoctrination that seeks to instill loyalty to the Communist Party and to prevent the observance of Islam.

Another official, Xinjiang Vice Chairman Alken Tuniaz, defended the camps and said that detainees were allowed to “request time off” and “regularly go home.” Although people in camps were not allowed to practice religion during their “period of study” they are permitted to practice their faith at home, he said according to AP.

Activists rebuked both officials’ claims. “Shohrat Zakir’s remarks completely distort the reality of the systematic persecution that Uighurs are suffering in China,” said Dilxat Raxit, a spokesperson for the World Uyghur Congress.

Earlier this month, Secretary of State Mike Pompeo called China’s treatment of Uighurs “one of the worst human rights crises of our time.” 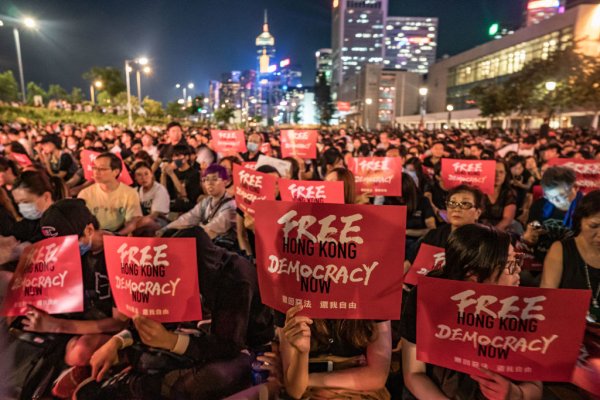