When Deirdre Ni Chloscai wears her black sweater emblazoned with the word ‘REPEAL’ in bold white letters, her friends in New York are confused. “People always ask me what it means,” she says. “And when I tell them what’s going on back in Ireland, they’re shocked. It just seems so outdated to them.”

Ni Chloscai is one of thousands of members of the Irish diaspora expected to travel home this week to take part in a historic vote on the predominantly Catholic country’s ban on abortion. The outcome of Friday’s referendum, announced in September by Prime Minister Leo Varadkar, will determine whether or not Ireland repeals the constitution’s eighth amendment, which gives an unborn fetus and its mother “an equal right to life.”

The referendum has divided Ireland into two camps, those voting “yes” to repeal and those voting “no.” Varadkar, who supports the yes campaign, says that if the amendment is repealed his government will introduce legislation allowing abortion up to 12 weeks of pregnancy.

Ireland has long been one of the most socially conservative countries in Europe. Contraception only became legal in 1980, while divorce was banned until 1995. A referendum to lift the ban that year passed by just 50.2%. Some say the 2015 referendum to legalize same-sex marriage, which was won by 62%, shows the country’s social conservatism has waned in recent years. But Friday’s vote looks set to be closer.

Irish citizens must actually be in Ireland if they want to have their say; postal votes are not available. And so activists on both sides of the abortion debate have been urging people to come “home to vote,” reviving an idea (and a hashtag) popularized during the 2015 referendum that legalized same-sex marriage. Although Irish citizens who have lived outside of Ireland for more than 18 months cannot vote, an estimated 40,000 of the 750,000 Irish nationals living abroad are still eligible.

Ni Chloscai, 24, managed to crowdfund her plane ticket in less than 12 hours and says that while her journey is a hassle, “it’s nothing compared to the nightmare journey that ten women are forced to make everyday to get an abortion overseas.”

Since 1980, more than 170,000 women have traveled out of Ireland to terminate their pregnancies—mostly to Britain, but also to the Netherlands.

Ni Chloscai grew up studying at a convent in rural County Monaghan, and was anti-abortion as a teenager. “But one day my friend called me in distress because she was having an [unwanted] pregnancy and had no option but to fly to the U.K. Seeing her in that situation, I realized we can’t just keep exporting the problem. It’s happened to several more of my friends since. It just can’t go on any more.”

Lauryn Canny, a 19-year-old actor in Los Angeles, shares her sense of urgency. “I can’t just sit back in sunny California putting up a few tweets and Instagram posts waiting for others to fix this for me,” she says. “I had to come home because this is probably the only time we’ll get to vote on this. I know I’m going to get into the booth and cry my eyes out. ”

Canny could not afford a ticket home, so her grandmother organized a collection from friends and family. She ended up flying to Dublin on Tuesday, in time “to do some quick campaigning and go to my local pub to talk to all the men in there about it.”

The pro-repeal ‘Abroad for Yes’ campaign has set up an online platform to connect those who cannot vote with those who are eligible but cannot afford to travel.

“I feel really lucky to have this chance,” says Clíodhna Walsh, 26, who lives in Berlin and had her flight to Dublin paid for by two ‘Abroad For Yes’ donors. “People in Germany are totally amazed when they hear what the law is in Ireland because they don’t think of Ireland as that kind of place any more.”

“I’m really worried about the result,” she adds. “I just don’t think I could ever live with myself if it didn’t go through and I hadn’t gone home. It’s going to be really close.”

A poll published on May 17 puts the pro-repeal side 12 points ahead, with 44% to the anti-repeal side’s 32%. But the gap has narrowed in recent weeks and, with 17% undecided, the outcome is far from certain.

“I am nervous because the campaigns are really ramping up now. And this has all happened so quickly,” says Lucie Heseltine, a 23-year-old legal researcher at a fintech firm in New York who is traveling home to south Dublin. “With the older generation it’s how they’ve always lived, so it’s hard to convince them. But I’m hoping we can use this momentum to drive it through now.”

Ireland took a step toward liberalizing abortion laws in 2013, making it legal in cases where the mother’s life is in danger, including from suicide.

“The yes side thinks if they win it’ll be the end of this discussion,” says Seáinín Mac Brádaigh, 27, who is voting ‘no’ in order to keep the eighth amendment. “But if it’s a yes then this is not the end. It’ll be the start. This will be an election issue for years to come. It’ll be so divisive.”

Mac Brádaigh is travelling by boat from southern England on Friday to save money, a 14 hour door-to-door trip. “I’ll only be home for five hours but it’s really important to me,” he says. “It’s a human rights issue. The Eighth is the only inalienable right the unborn have to protect them from changes in government thinking. It would be really extreme for us to go from our current regime to something quite liberal.”

“I definitely think there’s a lot more no voters in my demographic than normally come out and speak about it,” he says, adding that the vote has divided his family. “My sister doesn’t think men should be voting on it. But it’s usually a decision that affects two people.”

“I understand where people are coming from when they say it’s not up to men to vote on this,” says Patrick Kelleher, 24, who works for a charity in Cambridge, England, and is going home to vote yes in northern County Roscommon. “But when you look at the harm the Eighth does to women, I think I have a duty to let women know that you’re supporting them and respecting their decisions, letting it be up to them. Even if I have to travel.” 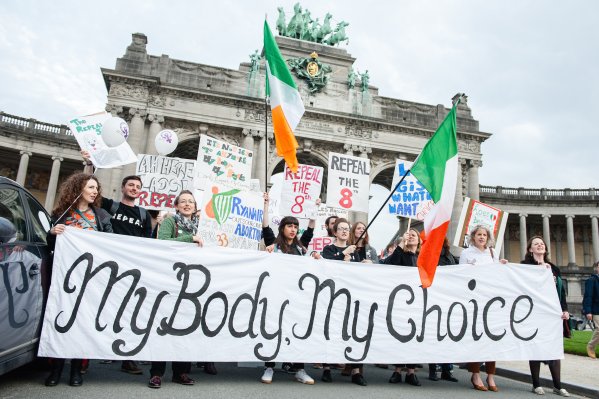 Ireland Readies for Abortion Referendum
Next Up: Editor's Pick