'This Is a Fight.' Meet Badiucao, the Dissident Cartoonist Taking on the Chinese Government

Chinese cartoonist Badiucao standing behind his artwork titled 'Light' in his studio in Melbourne on May 28, 2019.
Asanka Brendon Ratnayake—AFP/Getty Images
By AMY GUNIA / HONG KONG

A giant tattoo of tiny man standing in front of an oncoming tank covers the entirety of one of artist Badiucao’s upper arms. It’s an inspired choice of ink for the Chinese artist who has earned both the fury of the Chinese Communist Party and excited comparisons to Banksy.

Images of the individual known to history as Tank Man flashed around the world on June 5, 1989, when the anonymous Beijing resident, clutching a shopping bag, faced down a column of advancing tanks. The night before, troops had rolled into Tiananmen Square and brutally suppressed a weeks-long, peaceful occupation by students and workers calling for political reform. Hundreds, perhaps thousands, are thought to have died.

“I wanted [the Tank Man tattoo] on my right arm, the arm that I use to draw,” Badiucao (pronounced ba-doo-chow) tells TIME. “It’s a personal reminder to keep having courage with my arm, with my hand, and with my pen.”

Born in China in 1986, Badiucao grew up in a society where all mention of the Tiananmen massacre is fanatically censored. He was in university in 2007, studying law, when he gathered with friends in his dormitory to watch what they thought was a Taiwanese rom com. In turned out that their copy had been doctored by activists intent on spreading awareness of the events of 1989—a few minutes into the film, the movie suddenly cut to a documentary about the massacre.

“It shocked me deeply,” he says. For Badiucao, it was the moment that started his politicization. He tried to find out information about Tiananmen, but was quickly stymied. “If I can’t see the truth about the country, how can I have hope for the country?”

Read More: The Tiananmen Massacre Is One of China’s Most Censored Topics. Here’s a Look at What Gets Banned

Out of frustration, he started using his artistic talents to create satirical doodles. He had loved painting, drawing and photography as a child: now he used those skills to comment on the political situation in China, and dropped his plans to become a lawyer.

Badiucao comes from a family of artists — his grandfather and his great uncle were filmmakers in China during the 1930s and 1940s. As the political situation deteriorated in China in the 1950s, they both considered moving to Hong Kong or Taiwan, but ultimately decided to stay in their homeland. It’s a decision they paid for with their lives; both were persecuted and killed in an anti-intellectual crackdown, leaving Badiucao’s father orphaned as a young child.

“In my family, there’s a very clear message that to be an artist in China is dangerous,” he says.

So, in 2009, Badiucao packed his bags for Australia, where he got a masters degree and later naturalized. Today, the artist’s work encompasses all mediums, from fine to installation to performance to street art, but he says that everything he creates has a common theme.

“The message from me is always about promoting freedom of speech, advocating for human rights.”

He is best known for the cartoons he posts online, which often take aim at the Chinese government, like a drawing of Chinese President Xi Jinping hunting for Winnie the Pooh (the fictional creature was banned on the Chinese internet after a meme comparing Xi to Pooh went viral).

“Why are they censoring such an adorable animal?” the artist asks.

The artist, who now lives in Melbourne, shares much of his work on Twitter, which he started using after censors shut down his account on the Chinese microblogging site Weibo more than 30 times. Twitter is banned in China, but despite China’s Great Firewall, he’s sure that his artwork still reaches people at home who access the website via virtual private networks (VPNs).

“More and more websites, terms and photos are becoming ‘sensitive’ each year and have been added to censorship lists maintained by social media companies,” Yaqiu Wang, China Researcher at Human Rights Watch, tells TIME. But she says that creative work like Badiucao’s might be able to slip by the censorship apparatus.

For years, and even though he was no longer living in China, Badiucao attempted to conceal his identity, appearing at events in a ski mask. He had good reason to be fearful; others critical of the regime have faced severe punishments. Ai Wei Wei, who Badiucao worked for as an assistant at one point, has been imprisoned and hit with hefty tax evasion fines that the artist says were politically motivated. The political cartoonist Jiang Yefei was sentenced to six and a half years in prison last year for “subversion of state power.”

Badiucao finally unmasked himself on the 30th anniversary of the Tiananmen Square massacre in June, when a documentary about him called China’s Artful Dissident came out. It had become terrifyingly clear to him that Beijing already knew his identity. Ahead of a planned exhibition in Hong Kong late last year, he began receiving threats. When several of his family members in China were detained by the police, he decided to cancel his trip to Hong Kong and call off his show, which was going to feature artwork like an installation made from neon lights depicting the late Nobel Prize winning Chinese political prisoner Liu Xiaobo.

Despite the danger he faces, Badiucao refuses to stand down, and although he wasn’t able to have his exhibition in Hong Kong, his work is now being featured across the city in another way. Since early June — when Hong Kong’s anti-government protests began — the artist has spent much of his time creating artwork to comment on the unrest and the government’s response to it. When Hong Kong’s top official, Chief Executive Carrie Lam, wept on television as she spoke about the sacrifices she had made for the city, the artist released a cartoon of the leader with a reptilian arm wiping away what many Hongkongers said were crocodile tears.

Demonstrations have now become a near daily occurrence in the city, and Badiucao’s art can often be seen at rallies, printed out and turned into posters, or taped onto one of the colorful “Lennon Walls” of protest messages and artwork that have popped up across the city. It inspires the protesters to keep fighting.

Read More: We Are at the Point of No Return’: How a Series of Protests Escalated Into an All-Out Battle for the Soul of Hong Kong

“Protest art serves the function of not only spreading the necessary political messages but also connecting movement participants’ emotions, which are pivotal in sustaining a movement,” Vivienne Chow, a journalist and cultural critic based in Hong Kong, tells TIME.

Although Badiucao can’t be in Hong Kong alongside the protesters, he is happy that his artwork has finally reached the city, even if it’s via the Internet instead of a gallery. As the Hong Kong protests enter their third month, he hopes that his work will continue motivating the protesters to carry on their resistance against what is perceived as Beijing’s tightening grip.

“What’s happening in Hong Kong is not just about Hong Kong, it’s also about every country that values freedom and democracy,” Badiucao says. “This is a fight, and it’s a meaningful fight.” 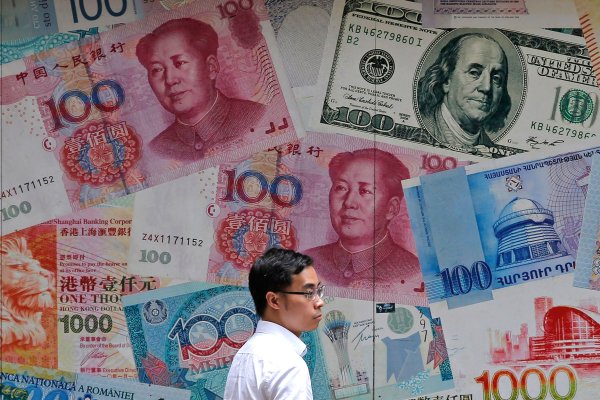 Choppy Waters Ahead for the U.S.-China Trade War
Next Up: Editor's Pick