Boris Johnson Led the Charge for Brexit. Now, as Prime Minister, He Must Deliver It

A week to the day before Boris Johnson became U.K. Prime Minister, he was on stage waving a smoked fish above his head.

“I want you to consider this kipper,” Johnson told his crowd, punctuating each word with a shake. Traditionally eaten by Brits at breakfast time, the fish was now being used by Johnson to make a point about Brexit. British kipper manufacturers, Johnson said, were having their costs unfairly pushed up by E.U. regulations. When Britain finally leaves the political and economic bloc, Johnson told his crowd, such regulatory nonsense would be a thing of the past. “We will,” he concluded, “get our mojo back.”

It was classic “Boris,” as he is universally known — soaring rhetoric on gently nationalistic themes, delivered with an attention-grabbing stunt. The fact that the rules governing kipper shipments are in fact set by the U.K., not the E.U., was also characteristic of the man now headed to 10 Downing Street, who has a long history of putting compelling narratives ahead of facts.

Having for years cultivated an aura of buffoonery, Johnson’s campaign for leader of the Conservative Party was by contrast a slick operation. He and his team developed an optimistic refrain — yes, his story went, Britain had been betrayed by Theresa May’s inability to pull the U.K. out of the E.U. as promised. But if the country just believed in itself a little more, and rallied behind a strong new Prime Minister, things didn’t have to be that way. “This is a great country,” Johnson said at one leadership debate. “We can do it.”

He sealed victory comfortably, beating rival Jeremy Hunt with 66.4% of party members’ votes. On Wednesday, he travels to Buckingham Palace to be formally appointed as the new Prime Minister by Queen Elizabeth.

The first and most pressing item on his checklist, naturally, is Brexit. The U.K. is still scheduled to leave the E.U. on Oct. 31, a date which Johnson pledged on the campaign trail to stick to, “do or die.” By default, the country is on track to crash out of the bloc on Hallowe’en unless a deal can be negotiated. Theresa May’s Brexit deal, which was roundly rejected by lawmakers, took two years. Johnson has just three months.

The new Prime Minister helped swing the 2016 referendum as its foremost cheerleader. Now, installed in Britain’s highest office by way of internal party machinations, he is responsible for delivering what he promised. His premiership rests on him succeeding.

Johnson is what Brits might call a “Marmite” politician — someone people either love or hate. He is extremely well liked by Conservative Party members, but less so by the rest of the country: 58% of Brits have a negative view of him, according to YouGov polling released Tuesday.

Born Alexander Boris de Pfeffel Johnson, he began his career in the 1990s as a journalist in Brussels, reporting on the E.U. headquarters for the Daily Telegraph newspaper. From there, he would regularly send back critical — and sometimes factually sparse — dispatches to London.

His work in Brussels, some former colleagues say, laid the foundation for Brexit. “He played into the image of the E.U. as a continental club where Britain was going to lose its influence, and where it would be held to hundreds of absurd regulations like straight cucumbers and bananas, or the E.U. having a standard size for condoms,” says Michael Binyon, who served as the Times of London’s Brussels correspondent at the same time as Johnson. “He realized it was more fun to write, and got him more headlines and attention. It made people laugh, but helped create a climate of hostility to ‘Brussels bureaucrats.’”

He became a Member of Parliament in 2001, leaving his Brussels-bashing behind to become a politician – though he remained the editor of the Spectator, a right-wing British magazine. He was fired from his role in the opposition senior leadership team in 2004 for lying about an affair he had with a Spectator columnist.

In 2008, Johnson was elected Mayor of London in a surprise upset for a city that did not normally vote Conservative. It was an early sign of his electability. In the job, though, he showed a lack of attention to detail. “As Mayor, Boris was so confident of his own image and visibility, he didn’t mind other people doing all the policy,” says Tony Travers, a professor of politics at the London School of Economics.

The London Mayor has a role in overseeing transport, housing and policing in the capital, but little actual legislative power. The job was perfect for Johnson’s exuberant personality. “He is someone who has a lot of presence and charisma, and clearly makes an impact on people,” says Mark Lyall Grant, the U.K.’s former National Security Adviser, who advised Johnson when he was Foreign Secretary.

In 2016, after two terms as Mayor, Johnson returned to Parliament. In the run-up to the Brexit referendum that year, Johnson couldn’t decide which side to support. Despite his time as a hack in Brussels, he still harbored some admiration for the European project. To ease his decision-making, he wrote contradictory columns setting out his arguments, one for “Remain,” the other for “Leave.” Eventually, he picked the anti-establishment side.

Some observers have compared Johnson’s populist approach to that of President Donald Trump, though the pair differ in other respects – unlike Trump, Johnson had a long career in politics before rising to the top job. Nevertheless, they get along. Trump was one of the first world leaders to congratulate Johnson on Tuesday when the results of the leadership election were announced. “A really good man is going to be the Prime Minister of the U.K. now,” Trump said. “They call him Britain Trump, and people are saying that’s a good thing.”

As Prime Minister, Johnson will have far more responsibilities than he did as Foreign Secretary, the job he was given by Theresa May after the referendum. “There will be a lot of focus on whether he can back up the rhetoric,” one senior diplomat who worked with him tells TIME. “We saw a lot of energy and panache in the Foreign Office. But also a very short attention span. If he’s going to be a successful Prime Minister, he will need to step up to a new level.”

He will have to do it fast. Johnson insists he would prefer to leave the E.U. with a deal, but also says Brexit will not be delayed any longer. He will go back to Brussels to renegotiate, but if he can’t do so in time, Britain looks set to leave the E.U. with “no deal” on Hallowe’en, with no arrangements for continued trade and regulatory alignment. The U.K. government’s Office for Budget Responsibility predicts such a scenario would send the economy into a recession, shrinking GDP by 2% by the end of 2020.

Johnson faces a similarly daunting challenge in Parliament, where no party currently has a working majority. His ruling Conservative Party has the most lawmakers, but is divided over how to pursue Brexit. The Prime Minister will be able to count on the support of the Brexit wing of the party that made life so hard for May. But more moderate Conservatives have threatened to vote to bring down Johnson’s government if he were to pursue a “no deal” Brexit, or a withdrawal without trade and economic agreements in place.

A vote of no confidence in Johnson could trigger an early general election, which he would need to win if he wants to avoid being the shortest-serving British Prime Minister in history. With Conservative support at just 25% nationally, according to the most recent YouGov poll, the party can be far from confident they will win the majority of seats in Parliament they would need to continue governing.

But if Johnson can overcome those hurdles, he will be Britain’s first post-Brexit Prime Minister, tasked with forging a new role for the country on the international stage. “He has recognition, which is an important factor in global politics,” says Grant. “To be known by your first name is political gold dust. That could be very helpful for Britain, post-Brexit.”

Johnson is a student of history and a great admirer of Britain’s wartime Prime Minister Winston Churchill, about whom he authored a book in 2014. “He thinks of himself in Churchillian terms,” says Binyon. “He likes the idea of coming to the rescue in Britain’s darkest hour. But it’s going to be very difficult. Not only does he have to bring the party together, but then the country. And he’s got to do so in a way that won’t take us straight down the drain.” 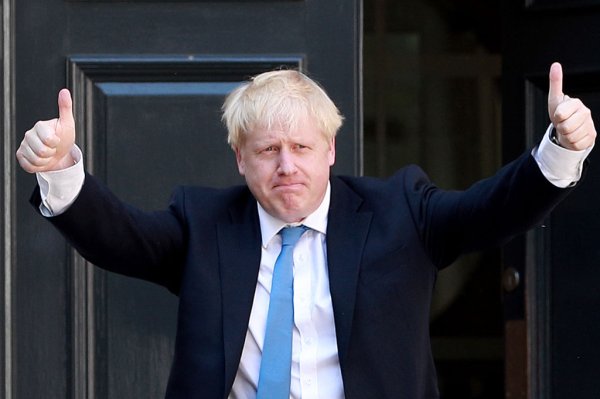