On Last Week Tonight John Oliver is usually in the role of debunking things, but when he stopped by The Late Show on Friday, he found himself confirming one of the internet’s latest conspiracy theories.

It all started when Disney distributed a photo of all the actors who voiced the characters in the live action remake of The Lion King. In that photo, Oliver – who voices Zazu in the film – is standing next to Beyoncé, who lends her voice to Nala. However, some eagle-eyed pop culture watchers noticed that there was a larger than expected gap between the singer and the late-night host, which led some fans to the conclusion that Queen Bey had skipped the festivities and was Photoshopped into to the photograph later. Turns out that they were right. Oliver did not mince words.

“She wasn’t there,” Oliver confirmed to Colbert.

“I remember we were setting up the shot and Chiwetel [Ejiofor] who was sitting in the front said ‘You need to be careful of where your foot is.’ And I looked down and there was just this piece of tape on the floor with Beyoncé’s name written on it,” Oliver said. “And literally, it was like an electrical reaction. ‘Ohh s–t!’ Just the future presence of Beyoncé was so intimidating.”

“If you look at my face in there, I look really intimidated,” Oliver continued. “And that’s because what I’m doing is imagining I’m about to be put in a photo with Beyoncé one day.”

As for the large space between him and the singer in the photo, well the British comedian found it entirely, saying, “It’s only appropriate there’s a significant gap between me and an actual queen.” After all, Beyoncé is the only royalty he recognizes. 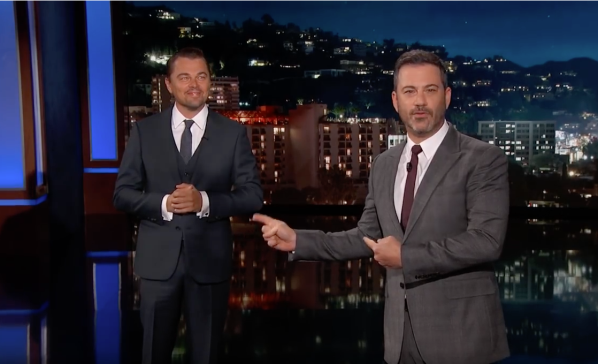 Turns Out Leonardo DiCaprio Is a Very Skilled Crasher
Next Up: Editor's Pick